Kantar Worldpanel ComTech released its latest estimates on the smartphone market yesterday, and Apple (AAPL 1.62%) registered notable dips in market share in a handful of important regions ahead of the iPhone X launch. The measurement period was the three months ending in October, and Apple's newest flagship didn't launch until the beginning of November, although the iPhone 8 and 8 Plus were released in September.

Android was more than happy to pick up the slack. 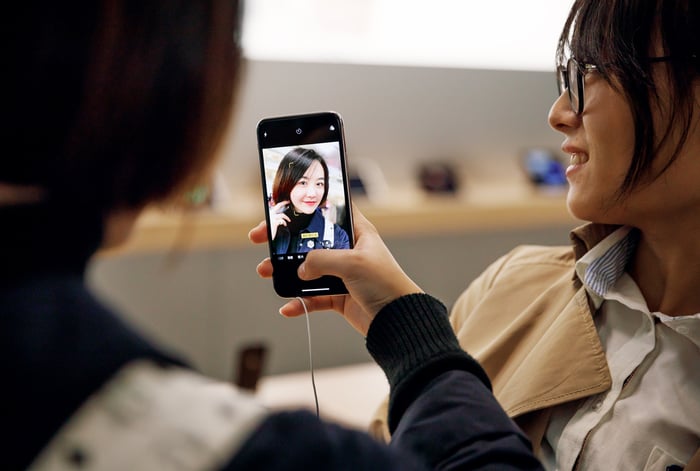 For starters, here are Kantar's iOS market share estimates for some of the major regions:

Data source: Kantar Worldpanel ComTech. Figures may not sum due to rounding.

Now compare that to how Android fared:

Data source: Kantar Worldpanel ComTech. Figures may not sum due to rounding.

"It was somewhat inevitable that Apple would see volume share fall once we had a full comparative month of sales taking into account the non-flagship iPhone 8 vs. the flagship iPhone 7 from 2016," Kantar's Dominic Sunnebo added. "This decrease is significant and puts pressure on the iPhone X to perform. Considering the complete overhaul that the iPhone X offers, consumers may be postponing their purchase decisions until they can test the iPhone X and decide whether the higher price, compared to the iPhone 8, is worth the premium to them."

Furthermore, Kantar's data shows that iPhone owners have been holding on to their phones longer, with 35% of users having owned their current iPhones for two years or more, up from 30% a year ago. That represents significant pent-up demand as consumers anxiously awaited the iPhone X release. The good news is that iPhone X production appears to be ramping faster than expected, bolstering Apple's ability to actually meet that demand.

Apple will bounce back

The Chinese market is consolidating further, with the top five brands grabbing 91% of sales, up from 79% a year ago. Four of those brands are local companies: Huawei, Xiaomi, Vivo, and Oppo (these latter two share a parent company, BBK Electronics). Samsung has been losing ground in China for years -- a trend that is continuing, as the South Korean conglomerate's share shrank to a mere 2.2% of the Chinese market.

China remains a hugely important market for Apple, and the Mac maker just recently returned to revenue growth in the region after a string of quarterly declines. It's also encouraging that Apple even posted a modest increase in Urban China. CEO Tim Cook spoke earlier today in China, discussing a wide range of topics including why Apple controversially complied with regulatory pressure to remove certain VPN apps from the App Store in China. Critics argue that Apple is helping facilitate government censorship, but the reality is that Apple has little choice but to concede if it wants to stay in the world's largest smartphone market.