Please ensure Javascript is enabled for purposes of website accessibility
Log In Help Join The Motley Fool
Free Article Join Over 1 Million Premium Members And Get More In-Depth Stock Guidance and Research
By Brian Stoffel - Dec 6, 2017 at 6:11AM

This is the first time the company fell below zero growth on this key metric.

For more than a year, Dave & Buster's (PLAY 0.09%) bucked the trend that's seeing fewer and fewer people eating out. The trend, however, has finally caught up: Comparable-store sales went negative for the first time since the company went public in 2014.

In after-hours trading, however, shares traded as much as 9% higher -- perhaps a combination of a slight earnings beat, a new plan to open smaller stores, and light trading. The company is definitely still performing better than most of its peers, but shareholders need to understand where the company is, and where it's going. 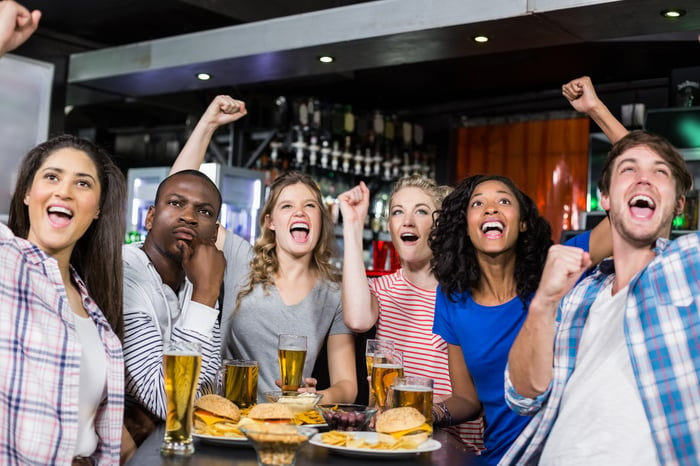 Before diving into the nitty-gritty, let's look at the headline numbers.

On par, this really wasn't that bad of a quarter. The free cash flow figure is a bit deceiving because of the company's timing to spend on opening new stores. For the first nine months of the year, in fact, free cash flow has grown 16% to $51 million.

But there were several areas for concern, chief among them the fact that the company produced less revenue in its comparable-store base for the first time. Here's how the trends have fared over time. 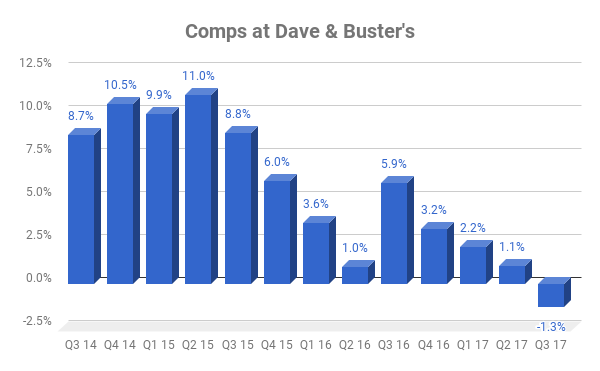 Hurricanes Harvey and Irma didn't help, pulling comps down 0.5%. Even so, results would have been below management's forecast.

When the year started, management's midpoint of comps guidance was 2.5%. Last quarter, the management team had to ratchet it down to 1.5%. This quarter, it's done the same once again -- saying that full-year comps will come in at a midpoint of just 0.4%.

While the high-margin amusement segment of the company did its part by bringing in 1.1% comps growth, food comps were down 4.2%. It appears that this was simply due to less foot traffic: Walk-up traffic was down 0.9%, while special events were down by a more troubling 4.8%.

Commenting on the trend, Chief Financial Officer Brian Jenkins said that "the impact of cannibalization and competition ... while significant, was stable."

Will this new format be a savior?

The biggest news coming out of the earnings release was the company's decision to start opening smaller stores in less populated cities throughout the United States. These stores will average between 15,000 and 20,000 square feet, and management believes it can build between 20 and 40 of them in the United States and Canada.

Right now, Dave & Buster's has 101 working locations. The smaller store format has the potential to expand the company's footprint from a previous goal of 211 stores to as many as 251. Of the 14 to 15 new stores the company plans to open next year, two of them are expected to be in this smaller store format.

As I stated, management believes that comps for the year will be at a midpoint of 0.4% growth. The midpoint of management's revenue guidance comes in at $317 million -- which would represent growth of 17%.

Investors should watch if the effect of the hurricanes represented a one-time event that the company can move beyond, or if it's the continuation of a trend that's pulling comps down.