Please ensure Javascript is enabled for purposes of website accessibility
Log In Help Join The Motley Fool
Free Article Join Over 1 Million Premium Members And Get More In-Depth Stock Guidance and Research
By Dan Caplinger - Dec 6, 2017 at 9:31AM

Find out why the surplus retailer's turnaround efforts haven't paid off yet.

The retail industry has experienced tough times lately, and even some niche areas of the sector have faced challenges. Liquidity Services (LQDT 5.06%) specializes in selling surplus inventory for its corporate and government clients, and it has gone through a significant transformation as it attempts to transition away from heavy reliance on the Defense Department toward a broader client base. Those measures have seen mixed results, as Liquidity Services has seen falling revenue throughout much of 2017.

Coming into Tuesday's fiscal fourth-quarter financial report, Liquidity Services investors expected that the company would continue to see sales fall, putting pressure on its bottom line. Liquidity Services ended up losing more money than anticipated, and although the company has hope for a better fiscal year ahead, shareholders seem less than convinced with its long-term strategic plan. Let's take a closer look at Liquidity Services and what its latest results say about its prospects. 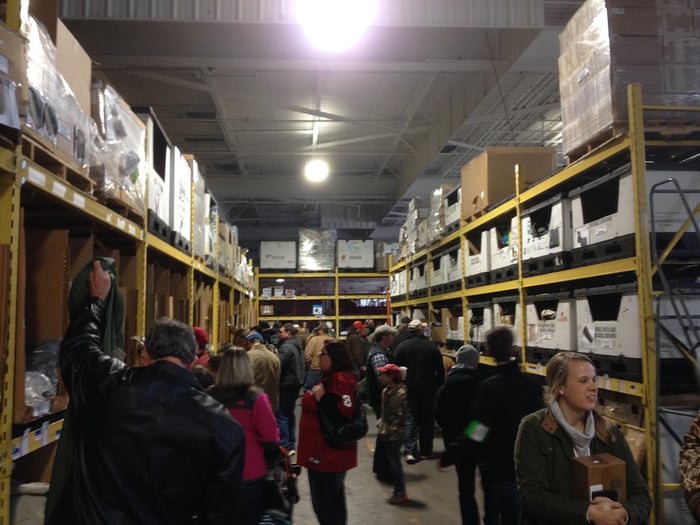 Liquidity Services' fiscal fourth-quarter results didn't do much to allay concerns that have come up in previous quarters. Revenue for the quarter was off 22% to $61.4 million, doing even worse than the high-teens-percentage decline that most investors had expected to see. Adjusted net losses widened to $10.3 million, working out to $0.33 per share, which was larger than the consensus forecast for a $0.25-per-share loss.

Liquidity Services continued to see mixed results in its fundamental business metrics. The number of registered buyers once again posted a solid 6% increase, finishing the fiscal year at about 3.17 million. However, auction participant counts were down 5% throughout the fiscal year compared to fiscal 2016, and completed transactions during the year were down 8% to just 530,000. Gross merchandise volume for the quarter was down 9% to $145 million.

CEO Bill Angrick tried to focus on the positives. "We are pleased with the performance of our state and local government marketplace," Angrick said, "and with the resumption of organic growth in our retail supply chain marketplace." The CEO pointed to having signed 3,000 new commercial and state and local government sellers, which it hopes will foster growth in the future.

What's coming for Liquidity Services in 2018?

Liquidity Services still wants to expand its marketplaces in both the commercial and municipal arenas. The key remains the LiquidityOne e-commerce platform, which is making progress and should help support the commercial self-service marketplace AuctionDeals.com in the near future. Eventually, Liquidity Services wants to provide a single unified portal on which to make all of its inventory available to purchasers.

However, the surplus retailer doesn't see a turnaround being quick. Guidance for the first quarter of fiscal 2018 included gross merchandise volume estimates of $140 million to $160 million, and the company believes that it will lose between $0.25 to $0.34 per share on an adjusted basis. As we've seen in previous quarters, those projections were worse than the consensus forecast that those following the stock had going into the report.

Liquidity Services' shareholders were not happy with the results, and the stock plunged 17% in pre-market trading on Wednesday following the Tuesday night announcement. Until the company manages to find ways to turn its efforts into more tangible results, investors in Liquidity Services will be skeptical about its ability to complete a successful turnaround strategy.