While Starbucks (NASDAQ:SBUX) still has room for growth around the world, in its home market the company has around 14,000 cafes. That may not represent complete saturation, but it's fair to say that in the United States the company has limited opportunity to expand, at least when it comes to its traditional stores.

Fortunately for investors, the company has plans to grow beyond its existing model. The chain has plans to grow a premium brand build around its Roastery locations and to include thousands of Reserve stores as well as Reserve bars at many of the chain's existing cafes.

It's an effort to create a new experience that former CEO Howard Schultz is leading. It's a model built around higher prices, premium offerings, and a wine bar-like way to offer coffee as well as food. 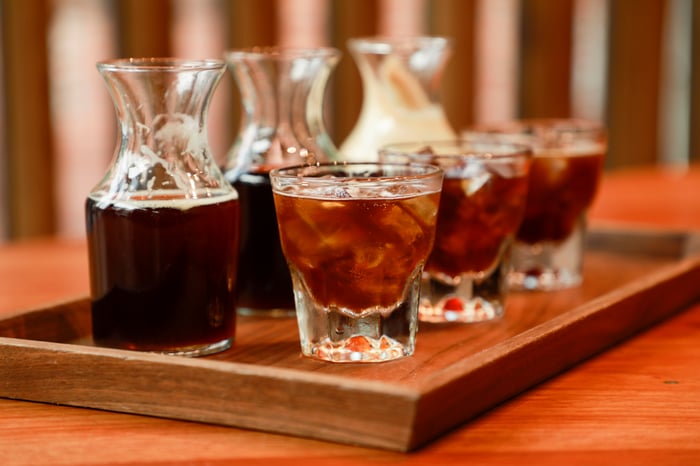 The original Starbucks Roastery in Seattle is sort of a Willy Wonka's Chocolate Factory for coffee. Premium beans are roasted on site, and the space also serves as a research center for the company. That has led to limited-edition drinks -- some offered only in the Roastery, and others rolled out across the chain.

Schultz will be leading an effort to add Roastery locations in some of the world's leading cities, building about 1,000 higher-end Reserve stores and adding Reserve bars to around 20% of the chain's cafes.

"Starbucks Roasteries under design or construction in the iconic, global cities of Shanghai, New York, Tokyo, Milan, and Chicago will join our Seattle Roastery in delivering an immersive, ultra-premium, coffee-forward experience like none other anywhere in the world," Executive Chairman Schultz in the chain's Q2 earnings release. "Together our Roasteries, Reserve stores, and Reserve bars will broaden -- and deepen -- the enduring emotional connection that exists between our customers and the Starbucks brand everywhere."

Call it a hub-and-spoke approach. The Roasteries serve as the hubs, roasting higher-end beans, creating new drinks, and inventing new experiences. They will then serve the Reserve locations (the spokes) in their regions. This not only creates opportunities to launch new stores, but it also allows existing stores to increase revenue by adding Reserve stores.

Reserve stores, bars, and the Roastery not only sell higher-priced beverages, but they also encourage increased spending. Each Roastery location will include a Princi Bakery, and all of the chain's premium locations encourage barista-driven experiences that offer value beyond just getting a cup of coffee, albeit at a higher price.

Starbucks has not often offered details on sales at its Seattle Roastery, but in 2016 customers there spent an average of four times what a typical customer spends in a regular store. Reserve bars probably won't deliver the same multiple, because visiting one won't be a special occasion like visiting a theme park, but the checks will be higher.

Starbucks has proved that people will visit a Roastery. It's both a destination for locals and a tourist attraction. It has also proved that consumers will pay a premium for special drinks, limited-edition offerings, and things they haven't tried before. What the company has not proved is how big the demand for those higher-priced offerings will be.

In the coming year, the company will begin to launch enough Reserve locations to gain an understanding of how expandable the concept actually is. Will people make pricier coffee part of their daily experience? Or will visitors largely treat this type of indulgence as a special event?

The answer probably lies somewhere between the two. As Starbucks gathers data, it will learn if its expansion plans are sustainable or if it needs to rein in its ambition.