In recent weeks, a number of stories have appeared questioning whether Starbucks (NASDAQ:SBUX) has reached a saturation point in the United States.

Those concerns come after BMO Capital Markets issued a negative report on Starbucks saying the company may have limited expansion prospects in its home market. The study found that the average Starbucks location has 3.6 other Starbucks cafes within a one-mile radius.

What BMO is missing is that the coffee chain's U.S. growth won't be fueled by adding new locations. It's going to come from increasing same-store sales by adding premium products to its stores along with building out Reserve locations, and more Roasteries. 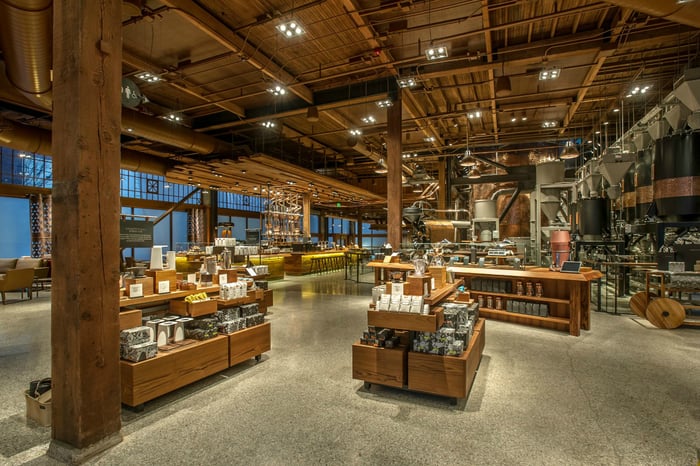 Reserve bars will mix in aspects of the Roastery. Image source: Starbucks.

Former CEO Howard Schultz has moved into a new role where his job is to create essentially a new brand. He will be working on adding Roastery locations in some of the world's leading cities, building about 1,000 higher-end Reserve stores, and adding Reserve bars to around 20% of the chain's cafes.

"Starbucks Roasteries under design or construction in the iconic, global cities of Shanghai, New York, Tokyo, Milan, and Chicago will join our Seattle Roastery in delivering an immersive, ultra-premium, coffee-forward experience like none other anywhere in the world," said Executive Chairman Schultz in the chain's Q2 earnings release. "Together our Roasteries, Reserve stores and Reserve bars will broaden-and deepen-the enduring emotional connection that exists between our customers and the Starbucks brand everywhere."

Each Roastery location is essentially a theme park for coffee lovers and Reserve stores are a smaller version of the same higher-end experience. Adding Reserve bars in existing stores, however, creates an opportunity for existing locations to increase same-store sales dramatically.

It's not a direct comparison, but in 2016 Roastery customers spent an average of four times what a typical customer spends in a regular store. Reserve bars will likely have a smaller multiple because visiting one won't be the same level of a special occasion as visiting a Roastery, but higher priced-items lead to bigger checks. In addition, Reserve bars will be placed in high-traffic areas where customers tend to spend a little more.

It's a new model for Starbucks

The existing Roastery in Seattle sells everything from a cup of coffee at normal Starbucks prices to $20 limited-edition beverages. The sweet spot for Reserve bars will be in having unique offerings that are more pricey but don't break the bank. Doing that should get existing fans of the brand to spend more or perhaps visit more often.

Essentially, Reserve bars give Starbucks an added product line aimed more at aficionados. Those customers may upgrade to that higher-end line on most visits, or only on some. They could also make more leisurely trips to the chain just to sample these premium products.

However you look at it, this is a game changer for Starbucks. It should help squeeze more sales out of existing stores while also allowing for further expansion in markets where it's already well established.