The stock has recently climbed above $1,000, but will that prompt a move from the tech giant?

Stock splits have become much less frequent than they were in years past, and Alphabet (GOOG -3.29%) (GOOGL -2.75%) was one of the first major companies to defy the previous convention of splitting shares when stock prices headed into triple digits. Yet Alphabet does have one stock split in its 13-year history as a publicly traded stock, and investors who like to see such moves as a sign of a company's confidence in its future wonder whether the tech giant might do so a second time. Now that Alphabet's stock price has moved convincingly above the $1,000-per-share mark, some see the likelihood of a stock split having gone up. Below, we'll look at the case for an Alphabet stock split in 2018 as well as some of the factors that could go into such a decision.

Alphabet has only split its shares once since the company's 2004 IPO. The move took a long time to complete, with the tech giant initially proposing the move in 2012 but only executing on the split after a couple of years.

The stock split came as Alphabet's share price pushed into the high triple digits. The stated purpose for the move, however, was much different from what investors had seen before. When most companies do a stock split, they simply issue new shares of stock in the same share class in which investors already own shares. Alphabet, however, wanted to create an entirely new class of stock that didn't have voting rights. Accordingly, the split involved current shareholders receiving a share of newly created Class C stock for every share of Class A or Class B voting stock that they owned prior to the split. The intent was to give the new nonvoting stock equal economic rights to the company, with the only distinction being the voting power of the new shares.

Many Alphabet shareholders weren't happy with the move, expressing concerns that the new shares were intended to give controlling shareholders an ability to sell off nonvoting shares while retaining full control of the company. After litigation, Alphabet went ahead and did the stock split in 2014.

How Alphabet stock has kept climbing

In 2012, Alphabet shares fetched about $600 per share before the split. By the time the split was finalized, both classes of stock traded above $500 per share. Subsequently, the prices of both share classes have roughly doubled in the span of less than four years. 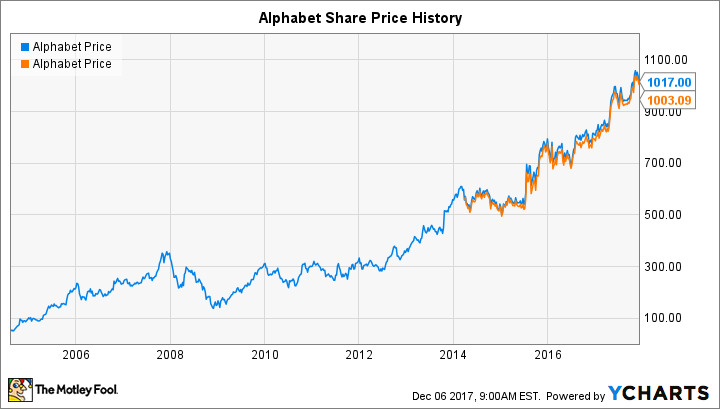 With the stock having climbed above $1,000 recently, some now think that it's time for Alphabet to consider another split. But despite the desire for some investors to see such a move, the company's attitude through its history indicates that it's unlikely to do a stock split without some compelling reason that goes beyond simply the price of its shares.

The 1 reason Alphabet would do a stock split in 2018

Just about the only thing that would likely get Alphabet to do a stock split would be the opportunity to join the most prestigious stock market benchmark in the world: the Dow Jones Industrial Average (^DJI -0.38%). Because the Dow is price-weighted, there's no chance that Alphabet would be invited into the index at its current share price, as its influence on the average would be far too great.

There's precedent for companies with high-priced shares doing splits and then subsequently getting into the Dow. Apple (AAPL 2.44%) executed a 7-for-1 stock split in mid-2014, bringing its share price down to roughly the $100 mark and receiving an invitation to join the Dow the following year. Alphabet's multiple share classes would make a Dow move more complicated, but a similar 7-for-1 split would give Google a share price that's only a bit less than Apple's.

The problem, though, is that the tech sector is already well represented in the Dow. To make room for Alphabet, the Dow's managers would likely have to replace an existing tech player in the index, and such moves have been relatively rare.

Most Alphabet shareholders don't really care whether the stock splits or not, because their long-term returns have been strong. The odds are relatively low that Alphabet will split its shares in 2018, but it's still a possibility if the tech giant sees an opportunity to become part of the most closely followed market benchmark.