The big Wall Street bank has made such moves before. Is now the time for another?

The financial sector has gone through extremely volatile times over the past 15 years. Having benefited greatly from the housing boom in the early and mid-2000s, JPMorgan Chase (JPM -1.11%) and other major banking institutions delivered strong returns to their shareholders. The crash in housing and the ensuing financial crisis took JPMorgan's share price sharply lower, but after overcoming what many had feared would be insurmountable obstacles, the banking giant has emerged stronger than ever.

The entities that now make up JPMorgan Chase have done stock splits in the past, and the recent rise in its share price has led some to wonder whether 2018 will bring another split for the shares. The attitude toward stock splits in general has changed dramatically since the last time the company made such a move, but that hasn't stopped some investors from hoping for a split in the not-too-distant future. Below, we'll take a look at whether a stock split is likely for JPMorgan Chase. 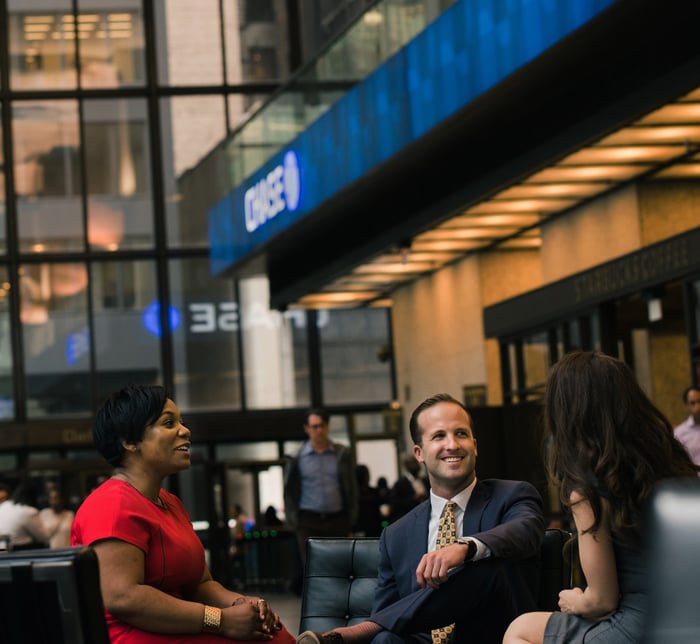 When has JPMorgan done stock splits before?

You can find the history of JPMorgan Chase stock splits summarized in this chart:

One thing to note is that all of these splits were done by Chase Manhattan, which is the predecessor bank with which JPMorgan merged in late 2000.

When you look at the events that prompted splits in the past, it's hard to find a definitive pattern. In the 1980s, the bank's stock price was relatively low when the split was initially declared, with the company seemingly targeting a price of about $50 per share to make the move. By the late 1990s and early 2000s, the bank had gotten more in line with the prevailing thinking of the time, waiting until the stock price was at or near triple-digit levels before implementing a split. The only 2-for-1 split in JPMorgan Chase's history came when the stock traded at nearly $135 per share. 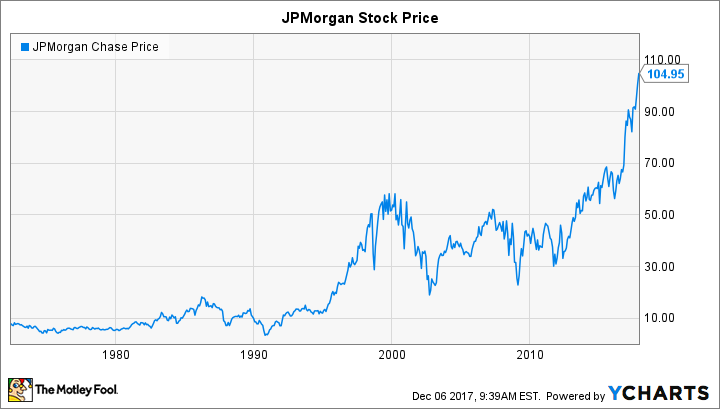 Why JPMorgan hasn't done any stock splits in the 21st century

A 17-year drought would make some people wonder why JPMorgan hasn't considered stock splits since 2000, but a quick look at the behavior of the share price makes it fairly clear why: The stock's moves haven't justified a split. Throughout the 2000s, JPMorgan shares traded between $20 and $50, and after the financial crisis, it took several years for the bank stock to regain the $50 per share level.

Only in the past year has JPMorgan Chase vaulted higher. Since the 2016 presidential election, the bank has produced gains of more than 50%, and that leaves out the upward impact of a modest 2% dividend. Now, JPMorgan is back above $100 per share for the first time since its last split.

Why JPMorgan Chase probably won't do a stock split in 2018

Despite JPMorgan's move into triple digits, the bank is still unlikely to do a stock split in the coming year. There are a couple of key reasons for that.

First, companies generally don't feel the need to do stock splits now just because their share prices climb above $100. The rise of discount brokers has made it easier for shareholders to trade in blocks of less than 100 shares, making the raw share price less important for trading liquidity.

Perhaps more importantly, JPMorgan Chase is a member of the Dow Jones Industrial Average, and because that index is price-weighted, having a higher share price means having more influence over the average. With one of its main rivals, Goldman Sachs (GS -1.65%), also being in the Dow and having a stock price that's more than double its own, JPMorgan has little reason to give itself even less weight in the average by doing a stock split.

JPMorgan shareholders won't be too disappointed with the lack of a stock split as long as the shares keep producing strong returns. In a new era, stock splits are simply less common, and it will take a much more explosive move higher before JPMorgan Chase investors can expect to see the bank take action.