It might seem difficult to find attractive stocks to buy right now, with the S&P 500 up by more than 17% so far in 2017 and the market hovering near record-high levels. However, there are some stocks that still look attractive from a long-term perspective -- even some of the market's best performers.

With that in mind, here are three stocks to keep in mind as 2017 comes to a close, all three of which I'm so confident about that I own them in my personal stock portfolio. 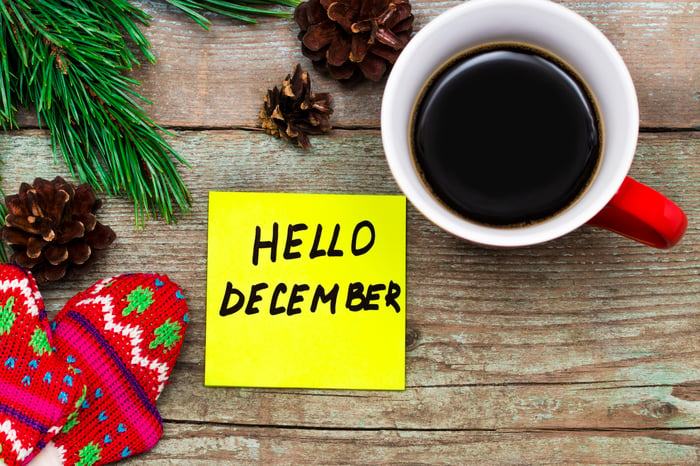 This ultra-reliable dividend stock is on sale

It's hard to find a stock with a better combination of reliable dividends and growth potential then Realty Income (NYSE:O). The company has paid 568 consecutive monthly dividends and has increased its payout more than 90 times since its 1994 NYSE listing.

Perhaps even more impressive, Realty Income has produced 16.4% annualized average total returns for its investors over those 23 years. To put this into perspective, consider that $10,000 invested in Realty Income's initial NYSE listing would be worth about $330,000 today.

The excellent combination of growth and income comes from Realty Income's business model, which consists of net-lease real estate. Realty Income owns just over 5,000 properties, the majority of which are retail oriented and are occupied by tenants in recession-resistant and e-commerce-resistant businesses. Tenants sign long-term leases with annual rent increases, and they're responsible for the variable expenses of property taxes, building insurance, and maintenance. In a nutshell, all Realty Income has to do is get a tenant in place and enjoy years of consistent, growing income. And, shareholders benefit from increasing property values over time as well.

Thanks to headwinds in the retail sector, which have had very little effect on Realty Income's business, as well as rising interest rates, the stock is actually down this year, dramatically underperforming the overall stock market. So, now could be a smart time to get into this long-term winner at a discount.

A second chance to get in

Square (NYSE:SQ) has been one of the market's best performers in 2017, up by 177% year to date. However, the gains are well deserved. Square's results have blown past analysts' estimates for the past several quarters in a row, and its business has been growing at a breathtaking rate.

Square's core payment-processing business is growing at a nice clip, with gross payment volume up 31% year over year. Other areas of the business are growing even faster, like the Square Capital small-business lending platform, whose loan volume grew 45% from a year ago and is becoming so successful that Square has applied for its own banking license. And, the company continues to produce innovative solutions, like the recently launched Square Register all-in-one payment terminal product.

The best part is that all of Square's small-business solutions have only been adopted by a small part of the addressable market. Square is only in five countries so far, and two-thirds of all businesses worldwide still don't accept card payments. In other words, Square doesn't need to take market share from competitors to grow -- it has a vast, untapped market opportunity.

Although Square has roughly tripled this year, it was actually up much more before a recent pullback due to an analyst's downgrade. Investors who had been avoiding Square because it had gotten too expensive may have gotten a second chance to get in this December.

One of its sector's best performers, but more upside potential ahead

The banking sector has been one of the market's top performers in 2017, and Bank of America (NYSE:BAC) is one of the top-performing bank stocks, up 30% year to date. While Bank of America may seem like it's getting expensive, not only is the strong performance well justified, but there are several catalysts that could propel the stock even higher.

For starters, the bank's growth has been excellent, with net income and earnings per share up 19% and 17%, respectively, through the first three quarters of 2017. The bank's return on equity (ROE) and return on assets (ROA) are approaching the key industry benchmarks of 10% and 1%, respectively, something that seemed impossible even a couple of years ago.

Most significantly, the bank has done a phenomenal job of prioritizing its efficiency, closing underperforming branches and embracing mobile and online banking technology. In fact, more than one-fifth of all Bank of America deposits now originate through the bank's mobile app, which is a far more efficient process than teller-assisted, or even ATM deposits.

As for the catalysts that could propel Bank of America stock even higher, here are three to watch in 2018:

To sum it up, if any of these things happen, and I'd say there's a good chance they will, Bank of America could still have a long way to climb.