Please ensure Javascript is enabled for purposes of website accessibility
Log In Help Join The Motley Fool
Free Article Join Over 1 Million Premium Members And Get More In-Depth Stock Guidance and Research
By Evan Niu, CFA – Updated Dec 12, 2017 at 12:04AM

The real benefit would be flexibility with capital returns, not theoretical savings that would never materialize.

Republicans are hard at work at tax reform, passing two different bills in the House and Senate earlier this month. Tax reform has been a hot topic of debate for the past year, with the issue of repatriation being particularly relevant for Apple (AAPL -3.00%). The Mac maker is the largest U.S. hoarder of overseas cash by far, with 90% more held by foreign subsidiaries than runner-up Microsoft. At the end of the third quarter, Apple was holding $252.3 billion in foreign cash, compared to Microsoft's $132.1 billion.

Under the bills, which still need to be reconciled, there would be a one-time tax on foreign earnings at a rate of 14% (House version) to 14.5% (Senate version), regardless of whether or not that cash is actually repatriated to the U.S. or not. Overall, Apple could benefit by as much as $47 billion, according to estimates from Financial Times. 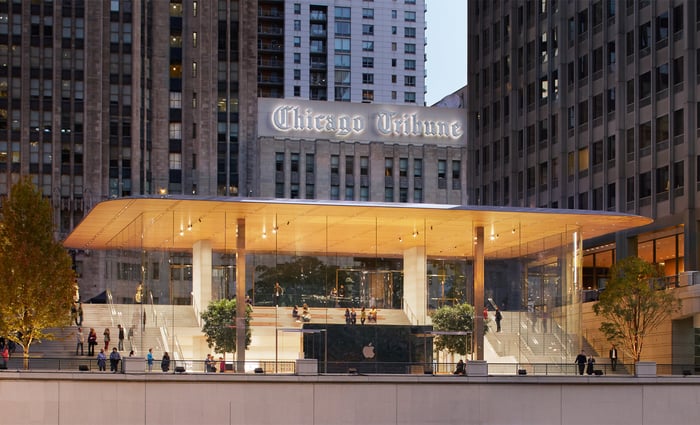 The bulk of that value would be derived from the savings on repatriation, but it also relies heavily upon hypotheticals.

Under current tax law, Apple would have to pay the corporate tax rate of 35% on repatriated earnings, which would translate into a $78.6 billion tax bill if Apple repatriated all of its foreign cash (after factoring in some deductions on foreign taxes paid). This bill would drop to $31.4 billion under the Senate version, and potentially even $29.3 billion if Apple loses its current battle with the European Commission over back taxes owed in Ireland. Apple inked a deal with regulators earlier this month to establish an escrow fund for this potential tax liability, according to The Wall Street Journal.

The biggest hole in the $47 billion estimate is the simple fact that Apple would quite literally never choose to repatriate 100% of foreign cash under current tax law. In that case, those "savings" are predominantly hypothetical and would never be fully realized. Apple has already found a viable workaround: issuing copious amounts of debt.

The real benefit would be flexibility

If investors look beyond flashy headline numbers regarding theoretical tax savings and instead focus on practical results, the tax bills would provide Apple with incredible flexibility with its balance sheet. If a one-time tax was imposed and Apple had to pay $29.3 billion to $31.4 billion (depending on the outcome of its European legal battle), the company would then be free to repatriate as much or as little as it saw fit.

Apple needs foreign cash to fund international operations, which is why it would never repatriate 100% of its foreign cash, but those foreign cash needs don't even come close to $252.3 billion. For context, Apple generally runs its domestic operations with $15 billion to $20 billion in domestic cash. Apple could repatriate $150 billion without batting an eye, leaving over $100 billion in foreign cash for operational needs, which could make sense because Apple's supply chain and manufacturing base are both concentrated in Asia.

Apple now has about $111 billion in term debt, and those bonds are callable. If Apple brought back a boatload of money (assuming Apple physically ships its cash on boats), it could retire all that debt and extinguish all interest expense, which totaled $2.3 billion in fiscal 2017. Those interest expenses aren't too meaningful in the grand scheme of Apple's finances, but in absolute dollars that's a lot of money. Cutting interest expense is also very real and tangible savings, unlike some of the aforementioned hypotheticals.

Alternatively, Apple could keep its current debt levels but then fund capital returns for many years without needing to take on more debt. What Apple chooses to do would depend on its outlook for potential changes in tax law in the years ahead. The key here is really all about flexibility. CFO Luca Maestri said it himself at a Goldman Sachs tech conference in February (emphasis added):

There is broad agreement, not around the specifics but around the content, that tax reform should happen. And hopefully, there is a good chance that something is going to happen this year. And obviously, one important element, as you said, is the repatriation of the accumulated earnings. And of course, we have a lot of that overseas. We've got now two-thirds of the company -- of the revenues overseas. Obviously, we would be looking to bring the cash back, and that would give us additional flexibility around our capital return activities.

The irony is that Maestri is mostly echoing what other finance executives have been saying all along: Companies are more interested in deploying potential tax savings in capital returns as opposed to job creation or wage increases, which undermines the theoretical "trickle down" justification that Republicans are using for the tax bills. Regardless of the political implications, Apple shareholders would absolutely be among the greatest beneficiaries of the tax bill if it becomes law.