The OLED leader has trounced the glass technology specialist so far. But is it still the better buy?

In June, I went out on a limb to determine which stock was the better buy for investors: Corning Incorporated (GLW 1.27%), or Universal Display (OLED 1.07%).

With the caveat that it would likely be a more volatile ride for investors, I ultimately chose Universal Display as the smaller, faster-growing business poised to take advantage of an industry still in its early stages. Both stocks have gained ground since then. But so far the organic light emitting diode (OLED) specialist, Universal Display, has earned a comfortable lead, outperforming both the glass technologist and the broader market by more than 32 percentage points as of this writing. 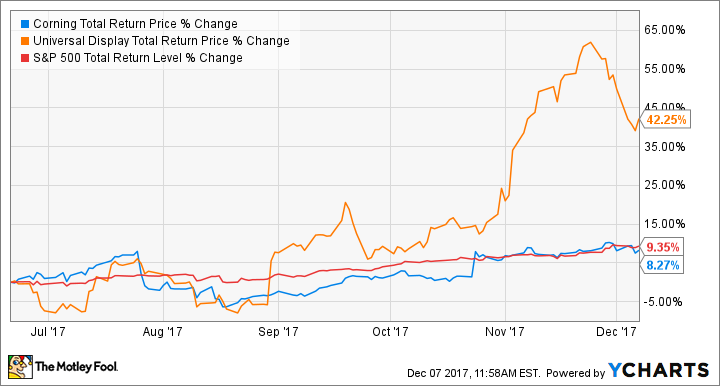 Of course, my musings at the time were longer term in nature. Patience in investing is, after all, one of our guiding principles at The Motley Fool. But with a couple more quarters under their belts, I think now is a great time to touch base and see what's changed.

Is Universal Display (still) a buy?

To start, keep in mind that even when I picked Universal Display in June, its stock had already climbed 110% so far in 2017. Now its year-to-date gain stands at an incredible 191% -- but with good reason. In each of its past two quarters, the company has effectively obliterated expectations and raised its full-year 2017 outlook.

Last month, Universal Display announced that third-quarter revenue had climbed 104%, to $61.7 million. And that's not including one of the $45 million biannual payments (up from $37.5 million last year) it receives under its long-term patent license and material supply agreement with Samsung Display -- those payments arrive in the second and fourth quarters of each year. Meanwhile, Universal Display's bottom line swung to earnings of $0.28 per share, from a $0.03-per-share loss in the same year-ago period. Investors responded by driving shares up more than 10% in a single day.

For that, investors can thank accelerating momentum in the OLED industry. OEMs have launched a slew of new flagship OLED smartphones and wearable devices, while ramping up production and demand for OLED televisions, along with anticipating launches of products featuring the world's first foldable OLED displays.

"We believe that OLEDs are fast becoming a requirement for the best consumer display products around the world," said Universal Display CFO Sidney Rosenblatt. "As a leading enabler in the ecosystem, we believe that our proprietary phosphorescent materials and technologies are key to unlocking the performance, value, and power efficiency of OLEDs."

But even putting aside the display industry's ongoing shift toward OLED -- and as fellow Fool Anders Bylund recently pointed out -- there's another longer-term catalyst that should leave investors even more excited: OLED lighting.

OLED panels can be made flexible, rollable, semi-transparent, and in different colors. They're also paper-thin, and emit even, higher-quality light than their competing LED counterparts. And that's why Universal Display customers from Acuity Brands, OLEDWorks, Konica Minolta, and LG Display, are working on their own OLED lighting solutions. LG Display even started mass production of its own OLED light panels in October, which should help spur a massive decline in their cost to consumers and, consequently, the beginning of a new surge in demand.

To be sure, according to research firm IDTechEx, the OLED lighting market should grow at a compound annual rate of 85% between 2017 and 2025, to an incredible $5.8 billion. Of course, Universal Display won't command all of that cash, but it doesn't need much to build on its relatively small revenue base, which is expected to arrive at roughly $320 million this year.

Meanwhile, Corning stock had largely lagged the market for months after my initial piece in June -- that is, until it showed investors it was being underestimated with an impressive third-quarter 2017 report in late October.

Of course, Corning's growth isn't quite as impressive as it builds on its nearly $28 billion market capitalization. Core sales last quarter climbed 6% to $2.7 billion, while core earnings per share rose 2% to $0.43. Both figures arrived slightly ahead of Wall Street's models, sending shares up more than 6% the following day in a surprisingly pronounced move for such a large business.

To that end, display technologies sales -- comprised mostly of glass substrates for the LCD display market -- declined 9% to $860 million. But this was an expected result as LCD glass price declines continue to moderate, and management remains pleased with trends for the lucrative LCD glass market.

However, the real standout of late has been Corning's specialty materials business, where sales popped 26% year over year to $373 million with the help of strong shipments of its popular Gorilla Glass product. In particular, Gorilla Glass continues its reign as the cover glass of choice on dozens of leading mobile devices. But a new automotive variant of Gorilla Glass is enjoying improved traction, earning design wins on more than 25 auto platforms so far.

Zooming out to the bigger picture, Corning also told investors that it remains on track to meet its strategic financial framework goal (initially set in 2015) for investing at least $10 billion in the business toward future growth opportunities and sustaining its industry leadership, while at the same time returning at least $12.5 billion to investors through repurchases and dividends.

On the latter -- and keeping in mind Corning most recently increased its dividend in February -- management also reiterated its promise to boost dividends by at least 10% annually through 2019. Corning's current dividend yields a solid 1.95% annually as of this writing, compared with Universal Display's minuscule quarterly payout of $0.03 per share yielding 0.07%.

The better buy today depends on your appetite for risk and big share price swings.

On one hand, Corning remains a steady, solidly profitable industry juggernaut with multiple irons in the fire to sustain its current business and drive modest longer-term growth. And it offers a significantly larger dividend that can help stoke the returns of patient investors.

With Universal Display, on the other hand, investors are presented with a much faster-growing business that plays a central role in the world's accelerating adoption of its flagship technology -- and for not only a variety of electronic devices, but also the potentially mammoth lighting industry beginning in the next few years. And to be fair, Universal Display management has made clear that its tiny dividend is more of a token starting point, leaving room to increase their payout as the OLED industry matures. That said, if there are any hiccups along the way and growth appears to slow, expect Universal Display stock to pull back hard and fast.

But in the end, while I still like Corning and believe it will outperform the market, I continue to favor Universal Display stock as the better buy for investors who don't mind enduring some volatility along the way.