They may not be good for your body, but soda and cigarettes can be great for your portfolio. By manufacturing addictive products for cheap and putting the full throttle of marketing behind building a brand, these companies can mint money for shareholders.

Today, we'll compare two leaders in this field: Coca-Cola (NYSE:KO) and British American Tobacco (NYSE:BTI). It's impossible to say with 100% certainty which will be the better investment over the next five years. But by evaluating each on three different criteria, we can get a better idea of the forces at play. Here's how they stack up. 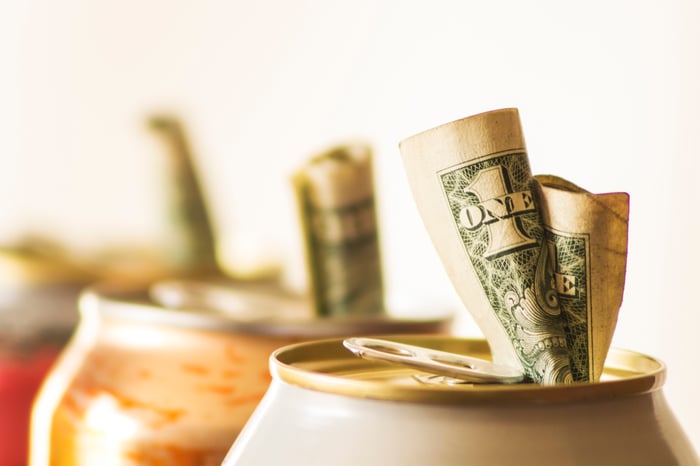 If you're a long-term, buy-to-hold investor -- and that's what we think you should be here at The Motley Fool -- there's nothing more critical to evaluate than a company's sustainable competitive advantages. You'll often hear this referred to as a "moat" as well.

In the most basic sense, a moat is what keeps customers coming back for more -- day after day and week after week. And all the while, a company's moat keeps the competition at bay.

For both of these companies, the key moat is provided by the strength of the brand. British American tobacco significantly increased its brand value earlier this year with the acquisition of Reynolds American. The combined entity now owns some of the biggest names in the business: Newport, Camel, Kent, Dunhill, and Lucky Strike.

Because of a string of acquisitions within the industry, the top brands have shown a remarkable ability to steadily increase prices while not losing customers.

Coca-Cola, on the other hand, is one of the most readily known brands in the world. Forbes ranks it as the fifth most valuable brand globally, and the highest for a non-technology company -- valued at $56 billion. It also owns other well-known beverages, such as Powerade, Dasani, and Honest Tea. It can use the cash that the flagship Coke products bring in to create narratives that support and build up these second-tier brands.

Usually, I would give the nod to Coca-Cola because of its superior brand awareness. But because of the incredible pricing power demonstrated within tobacco over the past decade, I'm calling this a tie.

Anyone who buys shares of either of these companies has to consider its dividend. The days of heady growth are over, and it would make sense to ask management to return as much capital as possible back to shareholders. But over the long run, that's not the most prudent approach -- for the company or its investors. That's because every organization at one point or another is going to face difficult economic times.

Those with cash on hand can emerge from such situations stronger -- by buying back shares on the cheap, acquiring smaller players, or, most importantly, outspending rivals to gain long-term market share.

Keeping in mind that Coca-Cola is valued at a 37% premium, in market capitalization, to British American, here's how the two compare.

Investors in these companies don't have too much to worry about on an absolute basis: Both have very healthy and reliable cash flows. But if forced to choose a winner, the nod here goes to Coca-Cola. The company has a net cash position that's positive, which British American doesn't.

Finally, we have the murky science of valuation. While there's no single variable that can reliably tell us how expensive a stock is, by taking several data points into consideration, we can get a more holistic picture. Because these are dividend-focused stocks, here are four of my favorite variables to consider.

British American takes the prize here. Not only is the company cheaper on an earnings and free cash flow basis, but it also has a slightly higher and more sustainable dividend.

For the past few years,Coca-Cola's dividend has been trending toward unsustainability -- or using more than 100% of free cash flow to pay shareholders. While the cash cushion provides enough wiggle room for now, it's a trend that investors need to keep an eye on.

So there you have it: We have a tie. Both companies have medium-strength moats; Coca-Cola has a stronger balance sheet, while British American has a more favorable valuation. If forced to choose one of these stocks over the other, it would be British American, as Coca-Cola's financials have been trending in a negative direction and the company doesn't enjoy the same pricing power as British American.

On the whole, however, I'm not a huge fan of either stock. Long-term trends toward healthy living create major headwinds that will keep me from buying either or making an outperform call on my own CAPS profile. There are, I believe, better places for your hard-earned cash.