The burrito chain's melty cheese just got a makeover -- and that's great news for investors.

When Chipotle Mexican Grill (CMG 2.00%) finally made its queso available at restaurants nationwide in early September, it boasted of "cracking the code" to the melty cheese that so many consumers craved. The fast-casual burrito specialist had lived up to its "food with integrity" mantra, sticking with all-natural ingredients and avoiding the industrial additives used in most queso recipes.

However, the backlash from diners was swift. In the weeks that followed, thousands took to social media to chide the chain and to voice their disgust with what many described as a bland concoction whose odd texture became grainy as it cooled.

But Chipotle heard the message loud and clear, and the result is a new queso that's being warmly received. 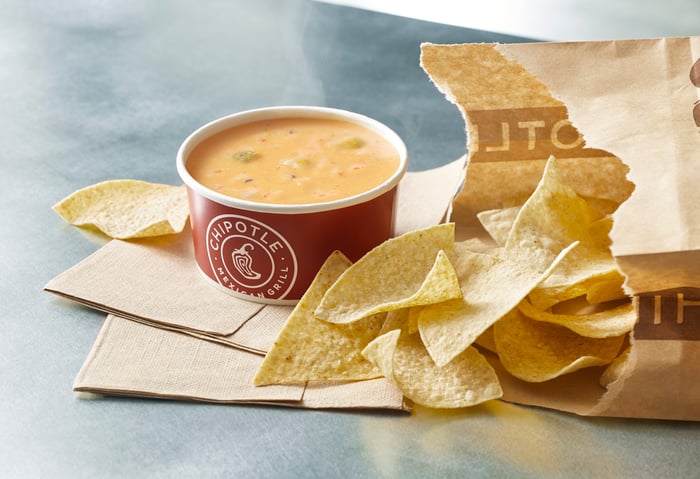 More specifically -- and without an accompanying press release to mark the occasion -- late last month diners began to notice that Chipotle had modified its widely hated queso recipe. According to Business Insider, which confirmed the changes with Chipotle, the new dip has been made "substantially less grainy," with a slightly smoky flavor and a more "even, overall heat."

"All in all, it was a substantial upgrade," added Business Insider's Kate Taylor.

That raises the question: Did Chipotle squander the excitement of its first failed queso launch?

After all, management confirmed that the launch of queso was almost entirely responsible for Chipotle's modest 1% comparable-store sales growth last quarter -- and that was with only 15% of customers adding queso to their order.

"This new menu item not only increased sales with existing customers, it also attracted new and lapsed customers into our restaurants." explained Chipotle's chief marketing and development officer, Mark Crumpacker.

But if the vast majority of those 15% were either indifferent or hated the add-on, it seems safe to assume that we'll see that initial demand drop sharply when Chipotle announces fourth-quarter results in early February. And even then, the news may be overshadowed by the recent resignation and pending replacement of company founder and CEO, Steve Ells.

A "cheesy" call to action

That's not to say Chipotle is standing idly by as diners fail to appreciate its delicious new achievement. The company took to Twitter yesterday with a clever call to action, offering a free serving of queso to anyone who wears their "cheesiest" sweater with the purchase of a regular-priced entree.

Hey, if you wear your cheesiest sweater to Chipotle on Tuesday, December 12th, we'll hook you up with FREE QUESO when you buy an entrée. Check it out: https://t.co/ttuKVrjlZt pic.twitter.com/Uz3wDSKs66

"What do we mean by cheesy, you ask?" Chipotle elaborated. "Well, just like your burrito order, it's what you make of it. (Surprise us.)"

Of course, assuming the company doesn't offer a preliminary financial update before its February call, investors will need to wait to see if this second serving of queso drives meaningful results. But with Chipotle stock trading at less than half of its 2015 highs, including a 17% decline so far this year, now could be a great time for opportunistic investors to scoop up some shares.