Please ensure Javascript is enabled for purposes of website accessibility
Log In Help Join The Motley Fool
Free Article Join Over 1 Million Premium Members And Get More In-Depth Stock Guidance and Research
By Dan Caplinger - Dec 7, 2017 at 11:02AM

Investors in the ski resort operator are now rooting for a good winter.

Vail Resorts (MTN 2.34%) does most of its business in the winter, and so for investors, the summer and fall seasons become an endurance test to see how well the ski resort operator can deal with its weakest time of year and prepare for the next ski season. Even as the company has made smart acquisitions to broaden its resort network, Vail has only been able to make token efforts to address the seasonality of its global business.

Coming into Thursday's fiscal first-quarter financial report, Vail Resorts investors were prepared for more losses, but they hoped to see signs of strong revenue growth. Vail actually did quite a bit better than most had projected on the top line, and if the weather cooperates, then the 2017-18 season could be Vail's best yet. Let's look more closely at how Vail Resorts did and what's ahead for the cold season. 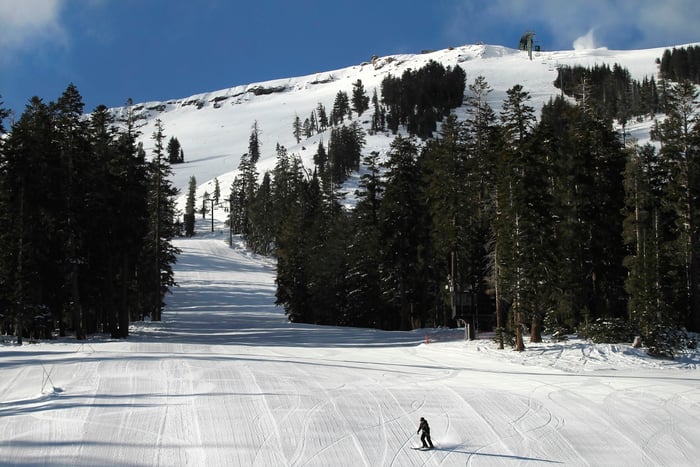 Vail gets ready for winter

Vail Resorts' fiscal first-quarter results were good in the context of a fall season. Revenue jumped 24% to $220.9 million, roughly doubling the growth rate that most investors were expecting to see from the ski resort specialist. Net losses dropped by half from year-ago levels due largely to an income tax benefit, but on an adjusted basis, a loss of $2 per share was slightly worse than the $1.90-per-share consensus forecast among those following the stock.

Vail's only operating ski resort during the quarter was its Perisher property in Australia, and Vail reported good results there. The company said that outstanding conditions in September helped to push that resort's revenue and visit numbers higher.

Elsewhere, summer activities were paramount, and Vail did the best it could under somewhat difficult circumstances. At Whistler, mountain biking, sightseeing, and other summer activities helped support the overall business. However, Vail said that U.S. summer results took a hit from operational challenges related to equipment failures and the delayed launch of Epic Discovery at Breckenridge in Colorado. The company called out Colorado and its Grand Teton Lodge Company property as seeing noteworthy gains in revenue per available room.

CEO Rob Katz generally kept his focus on the future. "Sales of our season passes continue to deliver outstanding results," Katz said, and "we have continued to drive significant growth in our destination markets, which represent approximately 60% of our increase in pass units." The CEO said that all of its geographical regions are seeing good performance, but he pointed to Northern California, the Pacific Northwest, and the Northeast as being particularly strong.

Vail is also optimistic about its long-term prospects. Already, acquisitions like Whistler Blackcomb and the latest addition of the Stowe resort in Vermont have helped strengthen the company's resort network. Season pass figures are up 14% in unit sales and 20% in dollar-denominated revenue from the previous year, and Vail expects total season pass counts to climb above 740,000 for the year.

Vail's latest guidance figures showed some slight changes from the previous quarter's predictions, but the bottom-line expectations are now much better. The ski resort operator reduced its pre-tax operating profit guidance for the resort segment by about $6 million, predicting figures of between $646 million and $676 million for the full fiscal year. Yet Vail boosted its net income guidance by nearly $30 million, with an expected range of $264 million to $300 million showing new enthusiasm about the company's ability to grow its bottom line in the coming year.

Vail Resorts investors were quite pleased with the company's report, and the stock gained 3% in early trading following the announcement. With the ski resort operator continuing to build out an impressive set of properties for skiers, snowboarders, and other winter enthusiasts to visit, Vail looks like it's making all the right moves in pursuing a long-term growth strategy that investors can get behind.