Please ensure Javascript is enabled for purposes of website accessibility
Log In Help Join The Motley Fool
Free Article Join Over 1 Million Premium Members And Get More In-Depth Stock Guidance and Research
By Matthew Frankel, CFP® – Dec 7, 2017 at 7:33AM

The stock market seemed to be firing on all cylinders throughout much of 2017, but the real estate sector, especially equity real estate investment trusts (equity REITs), was a major laggard. While the S&P 500 has gained nearly 18% year to date, the Dow Jones Equity REIT Index is up by just 4%.

While this is certainly disappointing to equity REIT investors, it's important to keep in mind that these stocks are best suited as long-term investments. And because they're representative of a unique asset class, they don't always move in tandem with the rest of the stock market. With that in mind, here are four key things REIT investors should watch in 2018. 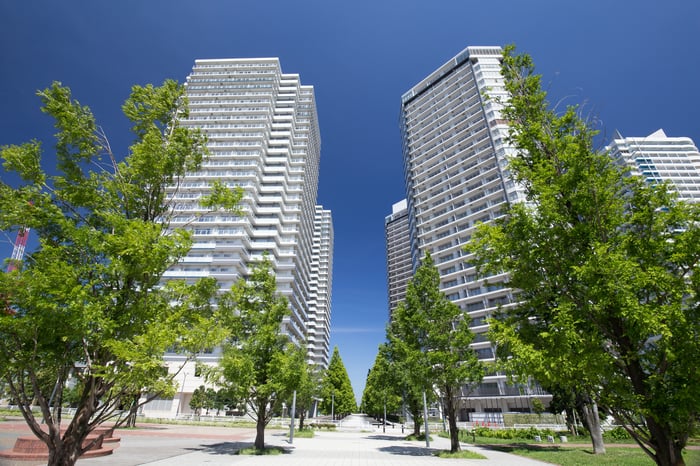 Will the Fed continue to raise interest rates?

This is probably the No. 1 factor that will determine if equity REITs will have a good year in 2018, at least in terms of stock price performance.

The Federal Reserve is widely expected to raise rates by 25 basis points in its December 2017 meeting, and by the same amount three more times in 2018 -- an overall expected increase of a full percentage point.

Since the Fed's interest rate forecasts are well-known information, it's fair to say that these expectations are somewhat priced into REIT prices at this point. Therefore, if the Fed ends up hiking rates slower than it expects, it could be a positive catalyst to REIT prices in 2018. On the other hand, if the economy is doing well and the Fed sticks to (or speeds up) its rate-hike plans, it could be another rough year for REIT investors.

One wild card for 2018 is the potential effects of tax reform, if Congress ends up passing a bill. At this point, it's unclear what a final bill could look like or what effect it could have on REITs and their investors. However, there are some provisions in the current versions of the Tax Cuts and Jobs Act that could certainly have implications for equity REITs.

Here are a couple:

So, while we don't know anything for sure just yet, tax reform is definitely worth keeping an eye on.

Shopping center, mall, and other retail-oriented REITs were some of the worst performers of 2017. A wave of retail bankruptcies caused some REITs' vacancies to soar, crushing the stocks of companies like DDR and Kimco Realty, which have fallen by 51% and 28%, respectively, in 2017.

Even retail-oriented REITs that haven't been affected much by the bankruptcies, such as Simon Property Group and Realty Income, have dropped, indicating that the uncertain retail environment has left investors spooked. 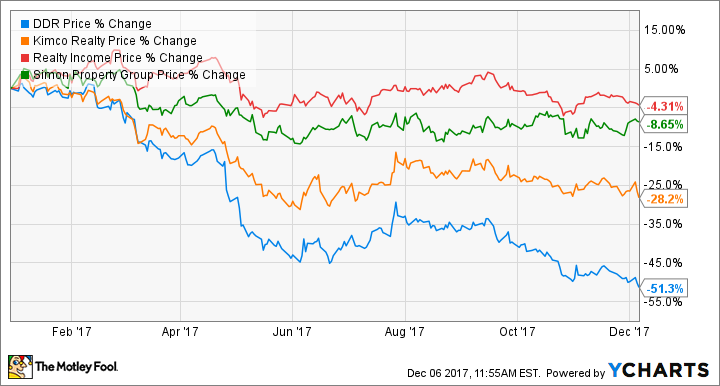 If we see the retail industry stabilize somewhat in 2018 -- meaning fewer high-profile bankruptcies -- it could be a positive catalyst for retail REITs.

A few equity REIT subsectors are experiencing another problem: oversupply worries. This generally results from a particular business growing rapidly (or projected to grow), so many different companies build lots of properties at the same time in order to take advantage. Unfortunately, this often has the unintended effect of creating too much supply, which leads to loss of pricing power and excessive vacancies.

Two good examples in the current environment are self-storage and senior housing. Self-storage has become quite a lucrative business in the economic recovery, with low vacancy rates and rising rents. However, this has resulted in too much supply in several key markets, which is one reason why leading self-storage REIT Public Storage has fallen by 5% this year.

Senior housing, on the other hand, is expected to experience unprecedented demand growth over the coming decades as the senior citizen population in the U.S. roughly doubles over the next 35 years. However, even though it's virtually certain that demand will grow, it will require somewhat of a balancing act to ensure that new supply doesn't outpace demand. This is a big reason why the three leading healthcare REITs, HCP, Welltower, and Ventas -- all of which have substantial senior housing portfolios -- have underperformed in 2017.

Of course, this isn't an exhaustive list of the things equity REIT investors should keep an eye on in 2018, as there are many possible factors that could move the sector, as well as individual REITs. However, with the exception of tax reform, these were some of the most market-driving trends of 2017, and they could have a substantial effect going forward.

The bottom line is that there's no way to know for sure whether equity REITs will have a stellar, bad, or just OK year in 2018, but these are some of the key factors that could move the sector one way or another.