Please ensure Javascript is enabled for purposes of website accessibility
Log In Help Join The Motley Fool
Free Article Join Over 1 Million Premium Members And Get More In-Depth Stock Guidance and Research
By Adam Levy - Dec 7, 2017 at 6:11AM

One of its biggest competitors in digital advertising, Facebook (META -0.76%), has noted that it has the opposite problem. The supply of ads on Facebook doesn't have much room to grow. Nonetheless, advertisers continue to increase their budgets with Facebook while ignoring Twitter.

But it's one thing to identify the problems -- after all, Twitter has knowingly struggled with ROI and small advertisers for years. It's a whole other thing to actually solve them, especially with competition like Facebook. 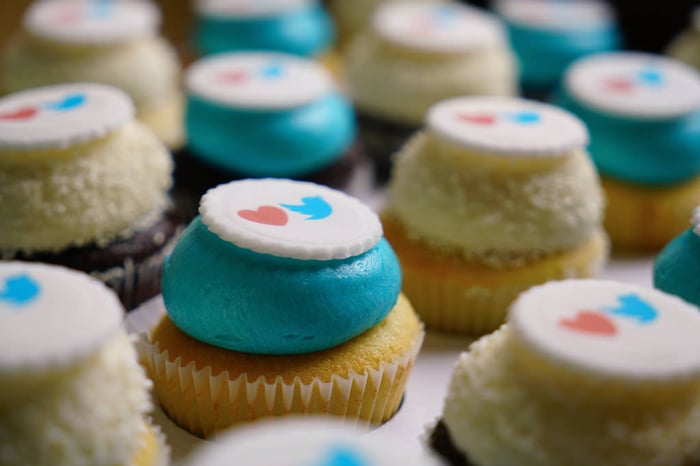 Getting in front of advertisers

Segal says the story Twitter has to pitch to advertisers is much better than it was a year ago. He notes cost per ad engagement (CPE) is down and total ad engagement is up. Indeed, CPE fell 54% year over year in the third quarter while ad impressions nearly doubled.

Of course, lower prices don't necessarily translate into better return on investment for advertisers. In fact, many advertisers are still complaining that Twitter doesn't provide a good enough ROI to increase their ad budgets on the platform.

Segal also pointed out the unique cases where Twitter can provide better returns than most other platforms. He notes Twitter is often the best place to reach an audience during certain times, giving the example of Game of Thrones viewers (you can't advertise on HBO, but everyone's talking about GoT on Twitter).

Segal also cited a study that says the ROI on Twitter can be up to 40% better than other platforms, which is extremely vague and suspect. It's impossible to reconcile Twitter's poor ad revenue performance if it's consistently producing ROI 40% above Facebook or Google.

Twitter might have a story to tell advertisers, but the numbers it's providing are only telling part of it. Advertisers still willing to invest are finding the rest of the story isn't so great still.

Smaller advertisers continue to be a big weakness for Twitter. As of the end of last year, brand advertisers still made up the majority of Twitter's ad revenue.

Twitter is investing in better tools and services for small advertisers. It recently started beta testing a service where Twitter will run ad campaigns for the company, constantly tweaking things to improve results. The automated campaign management service costs $99 per month, and Twitter hopes it can show improved ROI versus its competitors.

Segal also sees an opportunity in local advertising. A lot of content on Twitter is local, which provides a ton of data for smaller businesses to advertise. The problem is getting enough small businesses on the platform in the first place to actually utilize those data.

Finally, Twitter has established a customer success team, which will work with larger self-serve advertisers to make sure they are getting the most out of their ad campaigns.

What Segal didn't say about the falling ad prices and increasing ad engagements is that it's largely the result of shifting to video advertisements. With autoplay video ads, users that see 50% of a video for 2 seconds count as an engagement. That type of engagement might not be worth very much to an advertiser. Segal also noted video ads are now Twitter's biggest source of ad revenue.

Simply put, the return on investment still isn't there for advertisers. And the biggest reason is that most Twitter users aren't highly engaged, and users abandon the platform every year. That leaves advertisers targeting users with shallow data sets, making the ads even less effective.

Facebook users, by comparison, are highly engaged. The average Facebook, Instagram, and Messenger users spend 50 minutes per day across the three platforms. Instagram users, in particular, average 25 to 32 minutes per day on Instagram alone. That provides a ton of data for Facebook to target advertisers. Combined with a growing number of active advertisers on the platform, it can serve the right ad at the right time to the right person.

Twitter, meanwhile, is suffering from churn on both sides. Not only are users leaving, many advertisers are planning to spend less -- 21% less, according to a recent survey from RBC Capital. Unless Twitter can solve its user retention and engagement problem, it will continue to suffer on the advertising side.