Will Merck actually enjoy better luck in 2018? Perhaps. But it's first important to understand why 2017 has been such a year to forget for the big drugmaker. 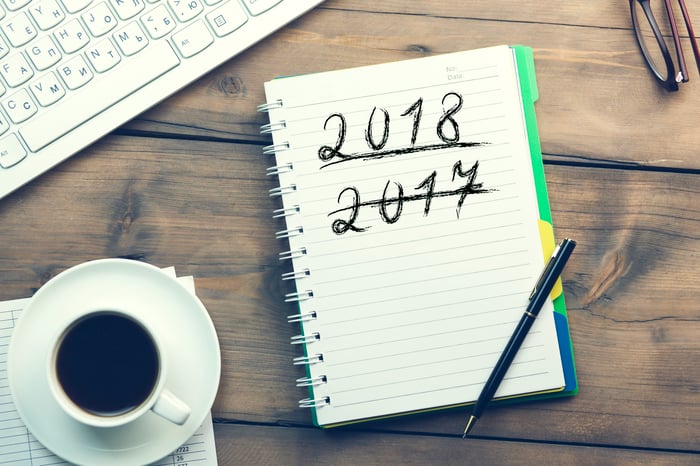 Merck actually got off to a solid start this year. In January, the company resolved litigation with Bristol-Myers Squibb and Ono Pharmaceutical over alleged patent infringement related to Merck's blockbuster drug Keytruda. While Merck had to make a one-time payment of $625 million to Bristol and pay royalties on sales of Keytruda, it was good to move past the lingering issue.

Keytruda won several victories early in the year. In March, the Food and Drug Administration (FDA) approved the drug as a fourth-line treatment for classical Hodgkin lymphoma. Keytruda also gained a positive recommendation in March from the Committee for Medicinal Products for Human Use (CHMP) for European approval.

Merck posted better-than-expected first-quarter results in May, thanks to tremendous sales growth for Keytruda. In the same month, the company picked up five more regulatory approvals for the drug -- four in the U.S. and the other in Europe.

There were disappointments along the way, though. Merck halted a phase 2/3 study evaluating verubecestat in treating Alzheimer's disease due to lack of efficacy. The company also threw in the towel on its development program for experimental cholesterol drug anacetrapib. Still, for most of the year, the stock held respectable, albeit unspectacular, gains.

Then came the storm. On Oct. 27, Merck made two announcements. The first was the company's third-quarter results. Merck missed Wall Street's consensus revenue estimate, but topped the earnings estimate. However, the earnings beat came with a catch: Without acquisition and divestiture-related costs, Merck wouldn't have fared so well. There were a few bright spots in the third-quarter results, though, especially strong momentum for Keytruda.

It was the second announcement at the end of the day that really caused angst for investors. Merck said that it had withdrawn its application for European approval of Keytruda in combination with pemetrexed and carboplatin as a first-line treatment for metastatic nonsquamous non-small cell lung cancer (NSCLC). The stock plunged close to 14% on the news and hasn't recovered yet.

Was the withdrawal disastrous for Merck? Maybe for its stock over the short run. However, the company isn't abandoning its quest to win approval for the first-line NSCLC indication in Europe. Basically, Merck was simply being pragmatic.

The drugmaker has another study in progress (Keynote-189) that it plans on using as the basis for its U.S. submission for Keytruda as a first-line NSCLC treatment. Yanking the regulatory submission so that data from this study also could be used on its European filing seems to be what Merck has in mind.

But the company has a few things going for it. The biggest, of course, is Keytruda. Market research firm EvaluatePharma predicts that Keytruda will be the world's No. 3 top-selling cancer drug by 2022. Merck's animal-health business is in solid shape, too. The potential for diabetes drug ertugliflozin also is promising.

Merck's success next year hinges heavily on Keytruda's performance in the marketplace, as well as clinical studies. My hunch is that Keytruda will deliver for the most part, making 2018 a better year for Merck than 2017.