Shares of Shake Shack Inc. (NYSE:SHAK) popped as much as 9.5% early Thursday, then settled up 8.1% to set a new two-year high after the fast-casual restaurant chain received a notable analyst upgrade.

More specifically, Morgan Stanley analyst John Glass increased his rating on Shake Shack from "Underweight" to "Equal weight," increasing his per-share price target on the stock from $34 to $41. Shares closed today at $45.15. 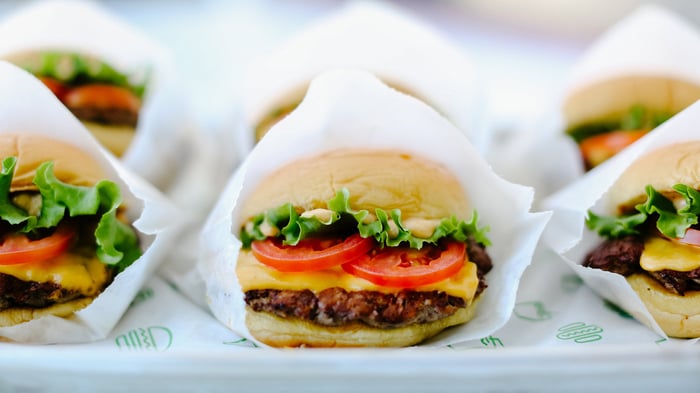 To justify his improved sentiment, Glass pointed to a combination of Shake Shack's consistently better-than-expected unit growth, improved disclosures from management regarding both average unit volumes and margins by region and, consequently, his revised valuation model based on those unit growth and margin figures. Glass also added the caveat that while he believes shares should be valued at $41, favorable revisions to the U.S. tax code could could add $9 per share to that price.

It's hard to blame Glass for bolstering his view today, especially as Shake Shack has indeed consistently boosted its own store-opening guidance. Following its initial public offering in 2015, it told investors to expect just 10 new domestic company-owned locations that year. Fast-forward to this year, and new restaurant openings are expected to be from 24 to 26. And investors were most recently told the range will accelerate further next year to 32 to 35 company-owned Shacks, along with 16 to 18 franchised locations. Those are big numbers considering Shake Shack will end this year with approximately 90 restaurants.

At the same time, those new locations are Shake Shack's only source of top-line growth. The chain has consistently struggled to boost same-store sales, which fell 1.6% year over year last quarter. Of course, that's easier said than done in today's increasingly crowded restaurant environment. But if Shake Shack truly wants to win the affection of investors and Wall Street, it will find a way to complement its growing store base with organic sales at existing locations.