As the week draws to a close, Goldman Sachs is moving the markers on three big industrial stocks before heading off to enjoy its weekend, announcing it is downgrading shares of Flowserve (NYSE:FLS) and Johnson Controls (NYSE:JCI) to sell, and upgrading Ingersoll-Rand (NYSE:TT) stock to buy. 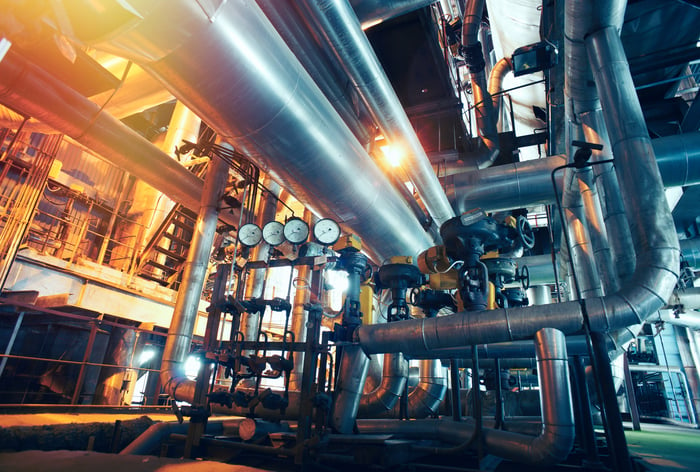 Let's get the bad news out of the way first. Citing too high "consensus expectations" for earnings and weak free cash flow, Goldman Sachs cut its rating on Flowserve stock from neutral to sell, and set a $37 price target on this $42 stock -- implying about 13% downside to the shares.

Given that Flowserve shares are already down 16% over the past year, this will not come as welcome news to Flowserve shareholders. Nonetheless, the analyst's worries are not without merit. According to data from S&P Global Market Intelligence, the pumps and valves manufacturer's earnings began reviving this year after two years of declines. Still, with less than $169 million in GAAP profit earned over the past 12 months, Flowserve stock sells for a price-to-earnings ratio of roughly 32.4. Free cash flow at the company is actually a bit stronger than reported GAAP income. Still, with just $176 million in cash profits earned over the past year, the stock's price-to-free-cash-flow ratio is a nearly as rich 31.1.

S&P Global analysis suggests that over the next five years, Flowserve will grow its profits at no better than 8% annually, which seems far too low to justify such high multiples to earnings on its stock. Goldman Sachs was wrong to recommend Flowserve stock earlier -- but it's right to downgrade this one today.

Flipping the off switch on Johnson Controls

Goldman Sachs has similar concerns about growth at Johnson Controls, albeit at first glance, the valuation on this one seems less excessive. As detailed in a write-up this morning on StreetInsider.com (subscription required), Goldman believes that growth concerns at this HVAC specialist "are unlikely to be fully resolved in FY 2018," and that this implies that "the equity will underpace peers on 2017-2019 EPS growth."

Johnson Controls booked a big net loss in fiscal 2016 -- $868 million -- but came roaring back this year, with earnings surpassing $1.6 billion over the last 12 months. Still, forecasts for future growth average 12% annually over the next five years, resulting in an expensive-seeming 1.8 PEG ratio on this 21.2 P/E stock.

With neither GAAP earnings nor free cash flow seeming to justify its stock price, Goldman Sachs is right to recommend selling Johnson Controls as well.

As the analyst explains, Ingersoll's larger climate division is enjoying "sustained" 4% rates of revenue growth these days, while its smaller industrial unit is poised to accelerate (also to 4%) after suffering a sales decline in 2016 and flat growth in 2017. (Longer term, though, most Wall Street analysts are predicting that Ingersoll-Rand will grow its earnings at about 10% annually over the next five years.)

Both GAAP earnings and free cash flow at Ingersoll-Rand sit comfortably above the $1 billion level, suggesting strong quality of earnings, and giving Ingersoll stock a P/E ratio of 21, similar to that of Johnson Controls -- but without the concerns about free cash flow. In Goldman Sachs' opinion, this valuation on Ingersoll-Rand is too low, and with earnings growing, the analyst believes Ingersoll should be valued on what (Goldman thinks) it will earn in 2019.

Estimating that Ingersoll stock is currently priced at about 15 times fiscal 2019 profits, Goldman argues it has a 17 times forward earnings valuation, and thus recommends Ingersoll-Rand stock as a buy.

Wrapping up: Two swings and a miss

Is Goldman Sachs right about that? Is Ingersoll-Rand a buy at 21 times earnings and a Wall Street-projected growth rate of 10%?

Honestly, I don't think it is. If Johnson Controls is a sell at 21 times earnings and 12% projected growth, I don't see how Goldman Sachs can call Ingersoll-Rand a buy at 21 times earnings but only 10% growth prospects. Free cash flow may differentiate the two companies, sure, but Ingersoll-Rand's FCF number isn't very much higher than its GAAP earnings number, and it gives a similar valuation on the stock.

At P/E and P/FCF ratios both twice as high as its projected growth rate, I think Ingersoll-Rand stock is just as overpriced today as are Flowserve and Johnson Controls. Simply put, all three of these stocks cost too much, and if Goldman Sachs wants to downgrade two of them, it should be consistent -- and rate all three of them sells.