Please ensure Javascript is enabled for purposes of website accessibility
Log In Help Join The Motley Fool
Free Article Join Over 1 Million Premium Members And Get More In-Depth Stock Guidance and Research
By Brian Feroldi - Dec 8, 2017 at 10:13AM

New store openings and customer gains enabled management to reaffirm its guidance for the year.

Duluth Holdings (DLTH -3.83%), a purveyor of clothing and accessories primarily used by tradespeople, released its fiscal third-quarter results on Thursday, Dec. 7. Management said that warmer-than-expected fall weather stunted its growth early in the quarter, but sales picked up once the temperature dropped in late October. When combined with the company's growing retail footprint, total sales grew at a healthy pace yet again.

Let's dig into the details to learn more about what happened at Duluth during the quarter. 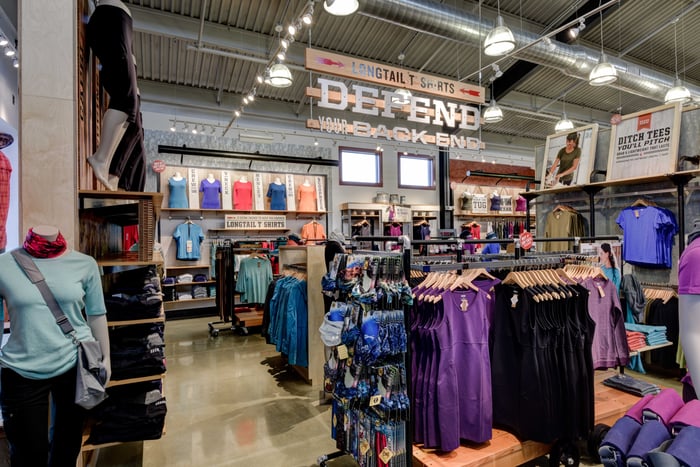 CEO Stephanie Pugliese said that this was the 31st quarter in a row of increasing net sales year over year. She also said that she was "proud" that her team was able to execute so well with new store openings.

Pugliese also provided investors with some upbeat commentary related to how the retail stores are performing:

We continue to attract new customers through our retail stores and during the third quarter, new customers acquired through retail was up 81%. We remain committed to investing in our omnichannel model and believe it is vital to building brand awareness and delivering holistic growth to our company.

Management reaffirmed guidance for the full fiscal year 2017 that calls for revenue to land between $455 million and $465 million. The midpoint of that range represents growth of about 22%. The fiscal year ends at the end of January. Turning to the bottom line, management predicts that full-year EPS will land between $0.66 and $0.71. That represents 4% growth at the midpoint.

Turning to 2018, management affirmed that the company is targeting 15 new stores openings for the upcoming year.

On the conference call with investors, Pugliese said Duluth remains well-positioned to thrive in this changing retail landscape:

Duluth is moving confidently toward a true omnichannel model. This ultimately means that we meet our customers where and when they want to shop and provide them the tools to interact with our brands seamlessly. Our solution based product, our distinctive brand identity and importantly, our continued investment in the channels that we control are what give us the ability to holistically grow our brand in this new retail environment.