After five months of declines, the out-of-favor hotel listings site sees the first signs of a turnaround.

It's been a brutal rookie year for Trivago (TRVG -1.26%) and its investors, but the stock may be bottoming out here. Shares of the hotel metasearch specialist opened 13% higher on Friday after Deutsche Bank analyst Lloyd Walmsley upgraded Trivago from Hold to Buy. He's sticking to his $10 price target, but with the beating the stock has taken lately that represents a healthy 50% of upside from Thursday's close.

Walmsley walked away from a Trivago analyst presentation on Thursday afternoon feeling as if clearer skies are ahead. He feels that the rough bidding environment that has rocked Trivago since its summertime peak will stabilize by the second half of next year, if not sooner. Shares were trading lower for the sixth consecutive month before Walmsley's upgrade pushed Trivago into positive territory for December. 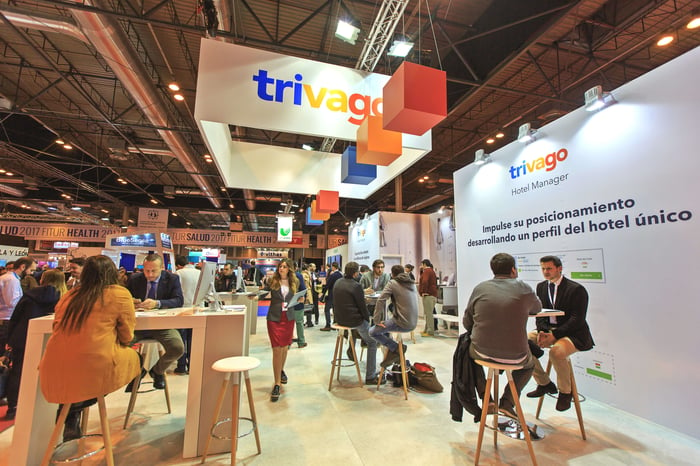 Trivago is a week away from celebrating its first year of trading, and it's been a turbulent ride. The stock went public at $11 in mid-December 2016, and more than doubled to hit an all-time high of $24.27 in July. The shares would go on to shed more than 73% of their value when they bottomed out earlier this week at $6.45.

Sharply decelerating growth has been the culprit of Trivago's fall from grace. Investors were lulled into complacency after seeing revenue soar 68% and 67%, respectively, in its first two quarters as a public company were rocked hard over the summer when it hosed down its full-year growth outlook. Revenue would go on to rise just 17% in its poorly received third quarter, with its even lower full-year guidance implying just 2% to 15% growth for the fourth quarter. It also warned that a return to top-line growth was unlikely until the latter half of 2018.

Unlike most travel portals that generate revenue off of actual bookings generated through their gateways, Trivago lets other sites, booking agencies, and actual property owners bid for ad placement on its hotel listing pages. The lion's share of its revenue is generated from the world's two largest travel portals -- Priceline.com and former parent Expedia -- and as they began to get smarter about the bidding process during the third quarter, Trivago saw its revenue per referral start to slip.

Walmsley isn't the first Wall Street pro to see Trivago in the single digits as a compelling entry point. Citi analyst Mark May upgraded the stock last month, pointing out that Priceline's Booking.com was going back to displaying regional landing pages on Trivago. If Priceline is starting to spend more on Trivago, it's a safe bet that Expedia will be following suit.

Naturally, where Trivago lands in terms of its wide top-line growth range for the current quarter will dictate if Friday's pop is warranted. Any more color that it can provide on how 2018 will play out will also be huge. Trivago stock has taken a big hit since peaking five months ago, but after five months of negative returns investors may be finally getting a break in December.