Disney (NYSE:DIS) is working on a couple of direct-to-consumer streaming products for ESPN and its film studios. Adding in the assets of Twenty-First Century Fox's (NASDAQ:FOXA) film and television properties could provide a nice boost to both services, enabling them to gain significant traction. That may be a major reason Disney is reportedly in talks to acquire most of Fox's assets.

Additionally, buying most of Fox's assets would give Disney majority ownership of Hulu, one of the leading streaming services in the United States. Disney and Fox currently each own 30% stakes in the company. The acquisition would give Disney the right to exercise more control over the service, potentially leveraging the platform to support its ESPN and Disney-branded streaming services. 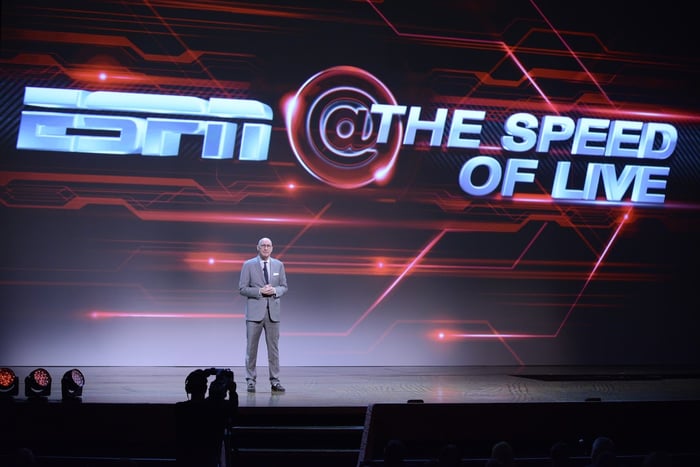 Disney might have a tough time convincing regulators a 60% stake in Hulu is viable for the streaming environment. The government required Comcast to forego management decisions for the streaming service until 2018 when it acquired NBCUniversal.

But unlike Comcast, Disney doesn't own any distribution platforms (yet). Additionally, Disney can make the case that Netflix and Amazon provide enough competition for Hulu with their giant content budgets. It may have better luck convincing regulators to let it maintain control of the service.

With Hulu, Disney would have control of a distribution channel for its television networks and its back catalog of content that it doesn't think belongs on its Disney-branded streaming service. That could allow it to increase revenue and the attraction of Hulu's on-demand and live TV streaming services.

Fox owns 18 regional sports networks that could provide a ton of great content for ESPN's over-the-top service, ESPN+. While Disney will want to ensure customers subscribe to cable to receive in-market broadcasts of their local teams, it could open out-of-market games to subscribers of ESPN+.

Disney would be competing with services offered directly by the sports leagues like MLB.tv and NHL.tv, both of which use Disney's majority-owned BAMtech for the back-end streaming technology. That could cause ESPN's already massive content budget to increase even faster when its deals go up for renewal, as sports leagues determine what's best for their operations.

The ability to stream live out-of-market games for baseball, basketball, hockey, and college football adds a ton of value to ESPN+, and it could help it justify a premium consumer price point to offset the rising cost of sports.

A new force in streaming

The force is already strong, with Disney's branded streaming service set to launch in 2019 following the end of Disney's contract with Netflix. The service will include all of Disney's top franchise, including Star Wars, Marvel, Pixar, and Disney. It will also include some of Disney's television series.

Just as Fox's RSNs provide a boost to the content on ESPN+, Fox's film and television catalog will provide a boost to the Disney-branded service. Fox owns shows like The Simpsons, It's Always Sunny in Philadelphia, and Buffy the Vampire Slayer, all of which have devoted fans that will watch episodes over and over again. A Fox acquisition would also bring X-Men back into the Marvel universe owned by Disney. That's the kind of content Disney is aiming for on its branded streaming service.

Disney doesn't expect to compete with Netflix in terms of content selection. That's why CEO Bob Iger said it will price the service well below the streaming leader. But Disney may be able to get a lot more out of a smaller catalog if it has content that subscribers will watch repeatedly. Disney's library is already chock-full of that stuff. Fox has a lot of that kind of content, as well. (As mentioned, the less valuable content could be used to round out Hulu's catalog.)

Owning Fox's television assets would give Disney more leverage with distributors to carry more channels, or demand higher carriage fees for its premier networks. But a lot of the value of the Fox acquisition lies in developing its direct-to-consumer platforms.

Disney already has the infrastructure in place to offer a direct-to-consumer service after acquiring a majority stake in BAMtech. But gaining access to Fox's content catalog makes the services much more appealing to consumers. If the acquisition happens, Disney would have control of three competitive streaming services within a couple of years. That's a good place to be as more and more consumers ditch cable for streaming.