Please ensure Javascript is enabled for purposes of website accessibility
Log In Help Join The Motley Fool
Free Article Join Over 1 Million Premium Members And Get More In-Depth Stock Guidance and Research
By Keith Speights - Dec 10, 2017 at 9:08AM

Canopy Growth (CGC -1.40%) rocked the cannabis industry in October when it announced a $245 million deal with Constellation Brands (STZ 1.02%), the maker of Corona beer and a long lineup of wines and spirits. Constellation bought a 9.9% stake in Canopy Growth and plans to market cannabis-infused beer.

Could more deals between alcoholic beverage makers and marijuana growers be on the way? The likelihood appears to be getting stronger than ever that there will be. There's one simple reason that more acquisitions and partnerships should be in store: the impact of marijuana legalization on alcohol sales. 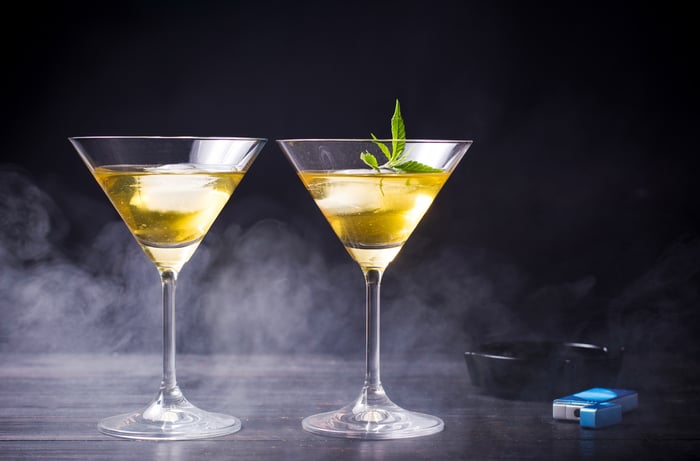 What the numbers show

This wasn't the first study to suggest that individuals could substitute marijuana for alcohol. Sixteen previous papers also support the idea that marijuana is used as a substitute for alcoholic beverages. Most of those studies, however, didn't use sales data like the University of Connecticut and Georgia State researchers did.

An even bigger impact on the way

My colleague Sean Williams recently identified five states that could put measures before voters in 2018 to legalize recreational marijuana. And that list didn't include New Jersey, which recently elected a new governor who promised to move forward with legalization in the Garden State. Just a few weeks ago, governor-elect Phil Murphy said that it's "full steam ahead" with plans to legalize marijuana and unleash a new $1 billion industry in the state.

So what does all of this have to do with the likelihood of more deal-making for marijuana stocks? Other alcoholic beverage makers are undoubtedly paying close attention to the data showing declining alcohol sales in states where medical marijuana is legal. I wouldn't be surprised if they're seeing similar effects already in states like California and Colorado where recreational marijuana is also legal. They know they need a plan.

Constellation Brands already has its plan. At the time the Canopy Growth deal was announced, Constellation CEO Rob Sands said that his company's success hinges on "identifying early stage consumer trends." Joining forces with the largest medical marijuana grower in Canada made sense for Constellation.

Could some of Constellation's large peers be working on their own strategies to address the potential negative impact of legalized marijuana on alcohol sales? Anheuser-Busch InBev (BUD 2.10%) executives didn't mention the Constellation partnership with Canopy Growth or any marijuana-related plans at all during the company's third-quarter conference call. However, its former chief marketing officer, Chris Burggraeve, recently told Bloomberg that he sees marijuana as a trend that the alcoholic beverage industry shouldn't dismiss. In Burggraeve's words: "When consumers want something, you ignore it at your peril."

My hunch is that Anheuser-Busch InBev and other major players in the industry aren't ignoring what's going on. I also suspect that some of Canopy Growth's larger peers, particularly Aurora Cannabis (ACB 2.27%) and MedReleaf (NASDAQOTH: MEDFF), are being closely watched by some of the leaders in the alcoholic beverage industry. If more data confirms that legalized marijuana is making a significant dent in alcohol sales, look for more deals like the one between Constellation and Canopy Growth.