One of these vendors of gene sequencing instruments is flexing its muscles and the other is struggling.

Rapid advances in the ability to quickly and cheaply sequence DNA and RNA are fueling research in cancer, immunology, complex diseases, forensics, agriculture, and many other areas, while clinical uses for gene sequencing are expanding rapidly. The demand for tools that can help scientists and doctors peer into the genetic codes of people, animals, plants, tumors, and microbes should continue to grow for many years.

Illumina (ILMN 3.62%) and Pacific Biosciences of California (PACB 1.13%) both make gene sequencing equipment and make money by selling instruments and the consumables that are required every time the machines are used. Which of these two companies is the best place to invest new money today?

The undisputed leader in gene sequencers is Illumina. Investors looking for a health technology company that dominates a growing market should look at this supplier of picks and shovels for the genomic revolution. Illumina has been at the forefront of what is called Next-Generation Sequencing technology. The company introduced the HiSeq 2000 in 2010, which was able to sequence the human genome for $10,000, and the HiSeq X Ten in 2014, which brought the cost down to $1,000. 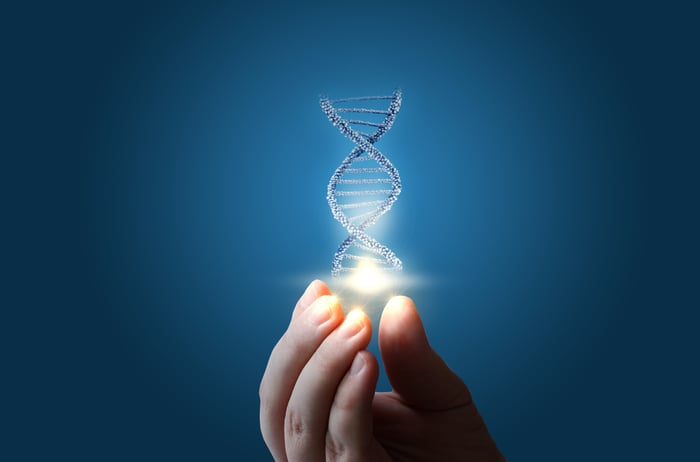 Each new generation of sequencer drove a burst of growth. Lower sequencing costs enabled new uses, brought in new customers, and increased usage, propelling the company's consumable sales. Illumina had a bit of a flat spot in its growth in 2016, though, as the high end of the company's instrument line was showing its age. For the full year, revenue grew rose only 8%, a big drop from the 15% growth a year earlier. That trend changed in January 2017 when Illumina introduced its new top-of-the-line model, NovaSeq.

NovaSeq has a core scanning speed four times that of its predecessor, and with the ability to sequence 48 whole genomes at once, the system can sequence at an average rate of one human genome per hour. The company believes the NovaSeq platform will eventually bring the cost of sequencing the human genome down another order of magnitude to $100. At that speed and cost, NovaSeq will open new applications for high volume sequencing and expand the market.

As production has gotten underway, NovaSeq has revived Illumina's growth. Last quarter, revenue rose 18% to $714 million, and non-GAAP EPS rose 14% to $1.11. The company has shipped 200 of the million-dollar systems so far and has a backlog of more than 100 systems. Illumina expects most of its 800 existing HiSeq customers to upgrade to NovaSeq, and the product is attracting new customers as well. A third of the orders in the latest quarter were from customers new to Illumina or who had previously only used the lower-priced benchtop systems. 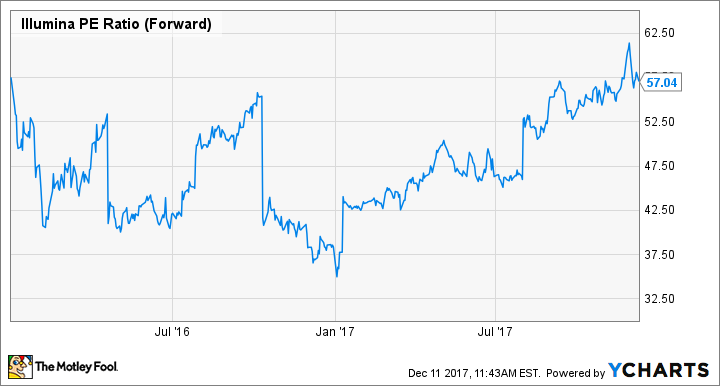 The flip side to Illumina's market dominance and sales revival is a high valuation. The stock has never been cheap, but the 67% rise in the stock price in 2017 has propelled the valuation to a level not seen in years, over 50 times analyst estimates of 2018 earnings per share.

The case for Pacific Biosciences

Pacific Biosciences is tiny compared with Illumina. It has a market capitalization of $325 million, compared with Illumina's $31 billion, and revenue the last 12 months of $95 million to Illumina's $2.5 billion. The company has never been profitable. But PacBio has carved out a niche for itself with a technology that allows it to compete for about 10% of the total sequencing market where its technology has an advantage.

Pacific Biosciences has been struggling the past year. The company had a license agreement with Roche that was yielding considerable license fees until Roche unexpectedly canceled the agreement about a year ago. And besides the license fees, PacBio was shipping systems to the Swiss drug giant, and the plan was for Roche to distribute PacBio's instruments into the clinical market for diagnostic applications. The termination of the relationship was a major blow that caused the stock to plunge 44% in a day.

The Roche issue is clearly not the only problem the company is having. Revenue that was growing 80% a year ago slowed to a paltry 9% increase last quarter, and the growth of instrument sales was actually negative. The only bright spots were increased utilization of installed machines that led to growth in consumables, and sales in China are growing well. Given the high price tag on PacBio's instruments, it's no surprise that there is a lot of quarter-to-quarter variation in sales, but it is also clear that sales growth has flattened out, a fact that has not gone unnoticed by investors. 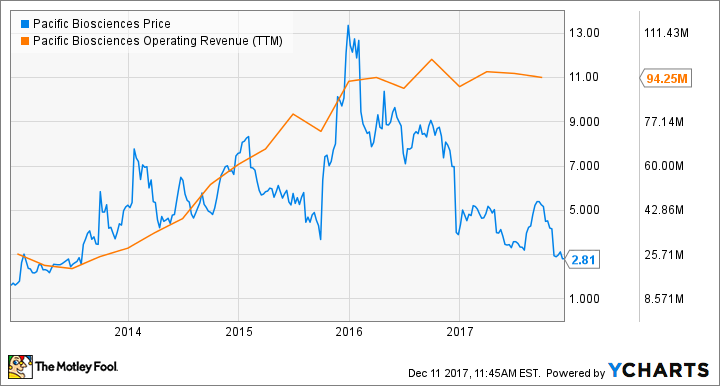 But the hope for PacBio investors is that the roughly $16 million that the company is investing in research and development every quarter will pay off in new products that will revive sales, just as we've seen with Illumina this year. With a stock that has been hammered 60% in the last year and is worth less than a quarter of what it was at its peak in late 2015, it might not take much good news for it to make a big gain. In fact, its last major product announcement, that of the Sequel system in September 2015, caused the stock to soar 49% in a day. Within three months, shares had more than tripled.

Long-term investors who look for quality businesses to buy and hold will quickly recognize Illumina as the better choice of the two. The company dominates the gene sequencing market, which seems destined to have a very long growth runway ahead of it in precision medicine, research in the life sciences, and agriculture. It's in the early stages of a new product cycle that should boost results for years. The valuation is near the top of its historical range and isn't likely to go much higher, so that's a risk, but the company has the financial strength -- it's generated $347 million in free cash flow so far this year -- to be able to invest in maintaining its economic moat. Long-term investors will likely be rewarded.

On the other hand, an investment in Pacific Biosciences would be speculative at best. The company is losing money, which means it needs to issue new shares from time to time to stay afloat, and the stock is likely going nowhere as long as its instrument sales remain stagnant. But the introduction of a new system, an event that is certain to happen eventually, could send the stock straight up.