Please ensure Javascript is enabled for purposes of website accessibility
Log In Help Join The Motley Fool
Free Article Join Over 1 Million Premium Members And Get More In-Depth Stock Guidance and Research
By Adam Levine-Weinberg - Dec 11, 2017 at 11:35AM

Shares of Hawaiian Holdings have fallen significantly since the middle of this year. Management has taken that as a cue to start repurchasing more stock.

Hawaiian Airlines parent company Hawaiian Holdings (HA -0.14%) has achieved stellar earnings growth over the past several years. For a while, the stock price kept up, rising from less than $6 in mid-2013 to a high around $60 late last year.

However, shares of Hawaiian Holdings fell as far as the low $30 range last month, and have been trading around $40 recently. That gives them a bargain valuation of just seven times earnings. Hawaiian is taking advantage of this rock-bottom valuation by significantly ramping up its buyback activity.

Just a few years ago, Hawaiian Holdings was producing consistently negative free cash flow, due to its relatively low profit margins and high capital spending. But beginning in 2015, the company's earnings power surged just as capex started to moderate. As a result, Hawaiian is now generating lots of free cash flow, despite making big contributions to its pension and other post-retirement plans. 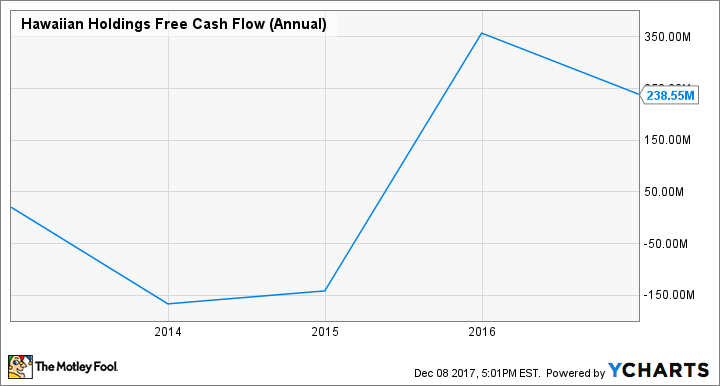 Initially, Hawaiian Holdings directed the bulk of its cash flow to debt reduction. Between 2015 and 2016, it paid down $430 million of debt and spent an additional $186 million to retire all of its remaining convertible notes. This reduced its leverage ratio from more than four times earnings before interest, taxes, depreciation, amortization, and rent (EBITDAR) at the beginning of 2015 to less than two times EBITDAR by the end of 2016, well within the company's target range of 1.5-2.5 times EBITDAR.

Hawaiian Holdings only had a little bit of extra cash for share repurchases during this period. It announced a $100 million buyback program in April 2015. However, the company only used a little over half of the authorized funds over the following two years.

Buying the stock while it's undervalued

Hawaiian Holdings entered 2017 with a clean balance sheet and significantly more cash than its official target. However, the stock price was also near an all-time high at the beginning of the year. As a result, the company didn't repurchase any stock in the first quarter. In April, the board replenished the company's share repurchase authorization to $100 million. Yet management remained tentative in the second quarter, spending just $4.3 million on share buybacks. In August, I noted that investors would benefit from an accelerated buyback program.

Apparently, management agreed that the sharp pullback in Hawaiian Holdings stock that began around mid-year represented a great buying opportunity. The company spent $46.2 million on share buybacks during the third quarter. As of last week, Hawaiian had repurchased another $40 million of stock in the current quarter. Just in the past four months, Hawaiian Holdings has repurchased more stock than in the prior two-and-a-half years combined.

2018 could be another year of big buybacks

Hawaiian Holdings is on pace to complete the $100 million share repurchase program authorized in April by year-end: more than a year ahead of schedule. Last week, it announced that the board had signed off on a new $100 million buyback program, valid through the end of 2019.

There's a good chance that Hawaiian Holdings will complete this new authorization more than a year ahead of schedule, as well. At the company's recent investor day, CFO Shannon Okinaka stated that while capex will increase next year, Hawaiian should still generate enough cash to make its scheduled debt payments, cover its new dividend, and buy back some stock.

Furthermore, the company has indicated that it might finance some of its 2018 aircraft deliveries if interest rates remain low and the Hawaiian Holdings stock price remains depressed. This would free up even more cash for share buybacks, potentially hundreds of millions of dollars. Finally, tax reform could significantly reduce Hawaiian's tax burden, providing an additional windfall.

Hawaiian Holdings stock is likely to stay under pressure as long as investors remain concerned about rising competition. But if the company can sustain its strong margins -- as management expects -- an aggressive share buyback program today could drive big gains for the stock a few years down the road.