Please ensure Javascript is enabled for purposes of website accessibility
Log In Help Join The Motley Fool
Free Article Join Over 1 Million Premium Members And Get More In-Depth Stock Guidance and Research
By Matthew Frankel, CFP® - Updated Jun 28, 2018 at 8:36AM

A Federal Reserve rate hike could make your next auto loan more expensive, but not by much.

The Federal Reserve's Federal Open Market Committee is widely expected to announce another 25-basis-point increase in the target federal funds rate on Wednesday. This would bring the benchmark interest rate to a target range of 1.25%-1.50%, up from 1.00-1.25% currently. Since auto loan rates often follow the fed funds rate, here's how the Fed's move could affect you if you're in the market for a new auto loan, and one factor that matters much more.

The short answer is "yes." However, it's not a perfect correlation. In other words, don't expect auto loan rates to increase by the exact amount the Fed raises the federal funds rate target range. 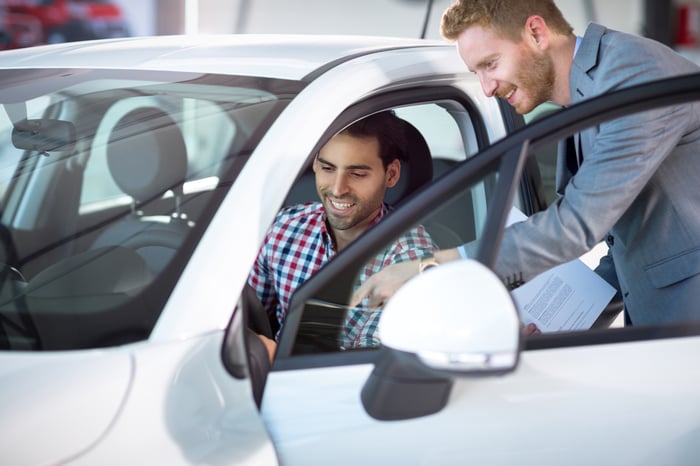 On the other hand, auto loan rates aren't directly tied to any benchmark interest rate. Rather, they are set by the free market, and therefore tend to respond to Fed rate hikes. So, although there's no way of knowing how fast or by how much rates will increase, it's safe to assume that auto loan rates will generally move in an upward direction if the Fed decides to raise rates.

How did the last Fed hike affect auto loan rates?

Perhaps the best way to figure out what to expect is to take a look at what happened last time the Fed decided to raise rates, which happened at the conclusion of its June 2017 meeting.

With that in mind, here are three key auto loan interest rates and the national average among borrowers with strong (720+ FICO score) credit – before the last rate hike and now.

So, all three rates increased since the Fed's last rate hike, but not by 0.25%. In fact, all three increased by roughly half of the Fed's rate increase. This is an excellent illustration of how although auto loan rates tend to move in the direction of the Fed's action, it's not a one-to-one relationship.

What would a 0.25% increase mean to your monthly payment?

Having said that, let's assume for a second that auto loan rates will rise by exactly 0.25%. We know this isn't likely to happen exactly, but let's take a look at what it could mean for your wallet.

Your credit is the most important factor

As a final point, the impact of the Federal Reserve's monetary policy on auto loans pales in comparison with the impact of your credit score. As you move past the top credit tier, auto loan interest rates get higher – much higher.

So, while a Fed rate hike could increase your car payment by a few dollars, having bad credit could result in you paying much more than that. If your credit isn't quite where you'd like it to be, or if you're a few points from the next "tier", it can be a smart idea to work on your credit before you apply for an auto loan.