Here's what we learned from the latest Fed statement, and how it could affect you.

The Federal Reserve just approved the second interest rate hike of 2017, and the third in the past six months. Inflation is shaping up to be lower than the Fed had hoped to see, but GDP growth and employment projections for 2017 were both improved from those made after the March Fed meeting. Here are the highlights from June's Federal Reserve meeting, and what this rate hike could mean to you.

In its second rate hike of 2017, the Federal Reserve raised the target Federal Funds Rate to 1.00%-1.25%, a 25-basis point increase over the previous level. Only one committee member (Neel Kashkari) dissented from the vote.

The Fed also indicated that it anticipates one more rate increase in 2017, and three in 2018, which is in line with its previous expectations. 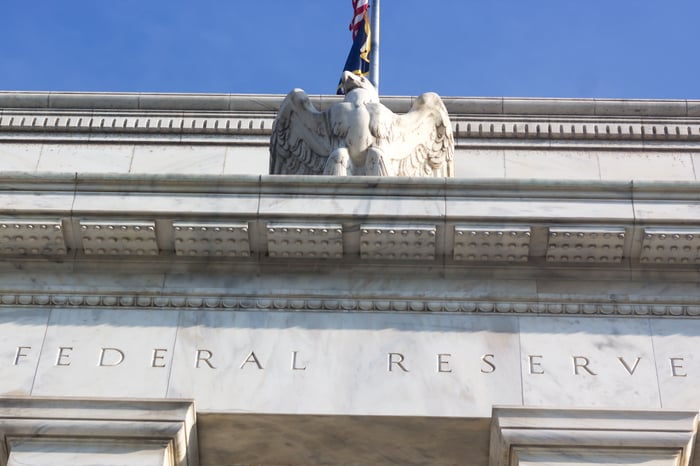 The committee's statement said that inflation has declined recently, although household spending has picked up in recent months. 2017 inflation is now expected to be 1.6%, short of the Fed's 2% target, and 30 basis points less than the 1.9% inflation rate projected in the committee's March 2017 statement. Core inflation (which excludes food and energy costs) is projected to be a slightly higher 1.7% for the year.

The inflation forecast for 2018 and 2019, however, hasn't changed. The committee still expects to see a 2% inflation rate in both years.

The Fed had previously indicated that it intends to start unwinding its massive balance sheet, and its latest statement shed some light on how that may happen. Although specific starting point wasn't provided, the Fed did say it is expected to begin this year.

In a nutshell, the Fed will eventually unwind its balance sheet at a rate of $50 billion per month, and several Fed officials have indicated that the program will continue until the balance sheet drops to a $2 trillion-$2.5 trillion level (it's currently $4.5 trillion).

How this rate hike could affect you

The most immediately apparent effects of the rate hike will be seen in consumer interest rates that are tied to a baseline interest rate, such as the prime rate. Credit card issuers will likely pass this rate increase to consumers, and borrowers with adjustable-rate mortgages and home equity lines of credit may see their rates increase.

Mortgages and auto loans are not directly affected by the actions of the Fed, but historically speaking, they tend to rise after the Fed raises rates. As I wrote recently, auto loans especially tend to feel the effects of Fed rate hikes.

Finally, while you may think that a Fed rate hike should translate into a higher interest rate from your savings account, that may not be the case. Historically, the two have moved similarly to each other, but so far, consumers have not benefited much from the three previous rate hikes in this cycle.