Please ensure Javascript is enabled for purposes of website accessibility
Log In Help Join The Motley Fool
Free Article Join Over 1 Million Premium Members And Get More In-Depth Stock Guidance and Research
By Daniel Miller - Dec 11, 2017 at 10:03AM

While Uber has found itself under a microscope for much of 2017, Lyft has made recent moves that suggest it could be gearing up for a bigger move.

Over the past half-decade as Lyft and Uber went from relative obscurity to household names, the brand recognizable by a playful pink mustache has largely played second fiddle to its larger rival Uber. After years of the company being little brother, it's easy to imagine that 2017 has been quite pleasant for the folks at Lyft after Uber trudged through a list of scandals and debacles. As we put the finishing touches on 2017, two recent moves suggest things at Lyft could get vastly more interesting in short order.

These two developments stirred up intrigue about Lyft's potential to go public sooner, rather than later, and perhaps even ahead of its rival Uber. One development was that investors continue to pour more capital into the ride-hailing company. Tuesday, Lyft announced that a recent round of funding increased from $1 billion to $1.5 billion. The additional half-a-billion dollars came in part from new investors that included Fidelity Management & Research Company and Ontario Teachers' Pension Plan, as well as additional money from entities already invested in Lyft. 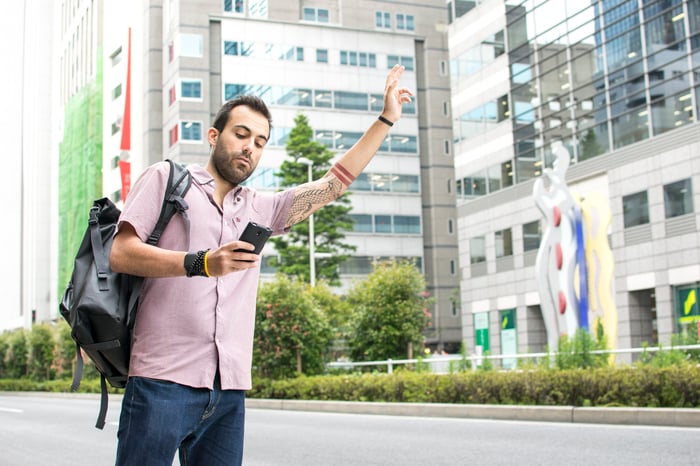 That funding puts Lyft's valuation around $11.5 billion, which is still far smaller than Uber's estimated $68 billion, but that doesn't do Lyft's year justice. Lyft has done a phenomenal job expanding this year, and John Zimmer, Lyft co-founder and president, said the company more than doubled the 162.6 million rides it provided during 2016. Lyft continued to take market share from Uber as the ride-hailing rival dealt with constant negative attention in the media, which ultimately led to Travis Kalanick's resignation as CEO of Uber. Not only will this additional funding help Lyft put even more pressure on Uber during a moment of weakness, going public could take that pressure to a new level.

Even more interesting than Lyft's fundraising, ride growth, and market share gains was its recent move to hire Kristina Omari as the company's first-ever vice president of corporate development and customer relations.

"She brings a proven track record of helping companies grow in a fast-paced environment. Her skills and experience will help Lyft continue to expand as we work toward our mission of improving people's lives with the world's best transportation." said Lyft CFO Brian Roberts.

The hire is interesting because it could very well be the first real push in Lyft's planning to go public. While most investors assumed Uber would be the first of the two rivals to go public, with a target landing in 2019, the New York Times reported that sources said Lyft was exploring going public in 2018.

It makes sense in terms of timing. 2017 has been a near-perfect year for Lyft, and a big part of IPOs are hype and timing. Right now, Lyft is expanding geographically, increasing market share, raising valuable capital, enjoying the negative press surrounding its rival, and inking deals with major companies such as General Motors (GM 5.55%) as the auto industry drives toward the future of autonomous vehicles.

We'll see if 2018 brings Lyft's IPO to life, but these two recent developments make things clear: Such a move makes sense sooner, rather than later.