General Motors (NYSE:GM) is planning to build and deploy thousands of self-driving electric cars in test fleets with Lyft next year, according to a new Reuters report.

If that's for real, it will be by far the largest fleet of autonomous test vehicles in operation. It's a very big deal that has huge implications for GM, Lyft, and their rivals.

What the report said

According to the Reuters article, GM will build thousands of Chevy Bolts equipped with prototype versions of the self-driving system GM has developed with its subsidiary, Cruise Automation. Most of these self-driving Bolts will go into ride-hailing service with Lyft in several states starting sometime in 2018.

GM has no plans right now to sell the self-driving Bolts to the general public. 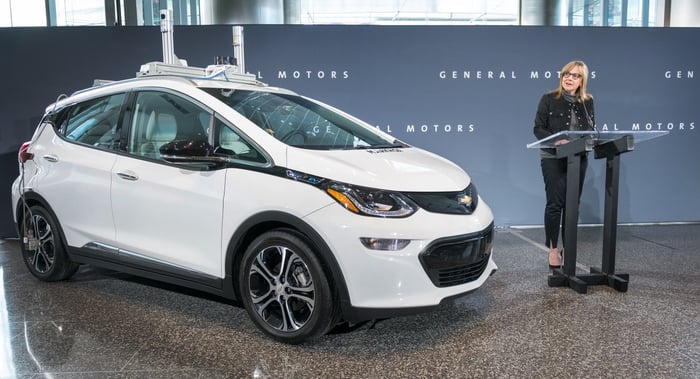 What it would mean for GM

GM has been working on self-driving technology for years. That work seemed to take a big leap forward with the acquisition of San Francisco-based start-up Cruise Automation early last year. It appears that Cruise has since become the center of GM's research efforts. Cruise's self-driving Chevy Bolt test cars have become regular sights on San Francisco streets, and recent videos taken from inside self-driving Bolt test cars suggest that the GM/Cruise technology is at a fairly advanced level. GM announced in December that it would soon begin producing self-driving Bolt test vehicles, but the hint was that -- at least in the near term -- they'd be produced in small quantities for GM's own testing.

A mass deployment would demonstrate two things: First, that GM's technology really is at a high level, and second, that GM and its supplier partners are ready and able to mass-produce self-driving cars.

Both of those things are significant. Taken together, it would be a strong argument that GM is leading the way to mass-produced Level 4 self-driving vehicles. Companies like Alphabet (NASDAQ:GOOG) (NASDAQ:GOOGL) and Tesla (NASDAQ:TSLA) have attracted a lot of investor attention for (among other things) their self-driving efforts, but -- as of right now, at least -- GM seems poised to leapfrog just about everybody.

What it would mean for Lyft

Lyft, like its larger rival Uber Technologies, knows that replacing its human drivers with self-driving vehicles is crucial to its future. Autonomous ride-hailing vehicles will allow Lyft to lower its prices while generating (hopefully) strong profits.

Uber has been working on its own self-driving technology for a couple of years, and has a few prototype self-driving test cars in service now. Lyft isn't known to have done any work on a self-driving system of its own, but it doesn't need to: GM owns a 9% stake in Lyft, and GM seems to have it handled.

If Lyft beats Uber to a self-driving fleet at scale, Uber will have a big challenge on its hands. 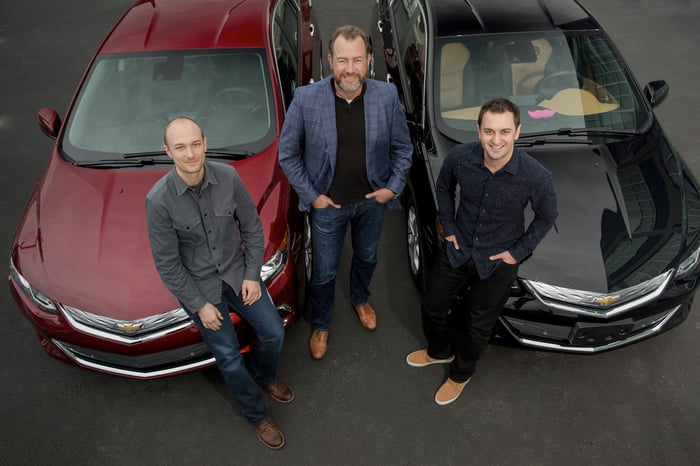 GM president Dan Ammann (center) with Lyft co-founders Logan Green (left) and John Zimmer. GM owns 9% of the ride-hailing company, and Ammann is a member of its board of directors. Image source: General Motors.

Could this be for real?

The Reuters report, by veteran auto-business journalist Paul Lienert, cites two unnamed "sources familiar with the automaker's plans." Generally, investors (and everyone else) should take reports based on information from unnamed sources with a grain or two of salt. But a few things suggest to me that this is probably for real.

First, Lienert is a veteran with good sources, and Reuters holds its reporting to high standards. Second, the report fits with the known facts: GM and Lyft have both said that a test of autonomous GM vehicles in Lyft service is forthcoming. Third, GM's Orion, Michigan, factory, where the Bolt is built, has plenty of capacity to do a special production run in the thousands.

Finally, and most tellingly, neither Lyft nor GM denied the report. In fact, GM's statement in response was almost a smiling hint:

We do not provide specific details on potential future products or technology rollout plans. We have said that our AV technology will appear in an on-demand ride sharing network application sooner than you might think. [Emphasis added.]

Translation: This is likely to happen, and it might begin sooner than 2018.

How important is this for GM investors?

If it happens, it will be a big deal. While the idea of a "race" to self-driving technology isn't really useful to investors, a big test like this next year (or sooner) will show that GM isn't about to be disrupted by Silicon Valley when it comes to self-driving. It will also give lots of people an opportunity to experience self-driving technology firsthand, which will almost certainly speed its adoption by increasing consumer demand.

If nothing else, it seems very likely to attract investors' attention and give GM shares a boost.