Please ensure Javascript is enabled for purposes of website accessibility
Log In Help Join The Motley Fool
Free Article Join Over 1 Million Premium Members And Get More In-Depth Stock Guidance and Research
By Demitri Kalogeropoulos - Dec 11, 2017 at 10:19AM

The holidays won't be as rough on this retailing business as investors had feared.

Wal-Mart (WMT 0.86%), the world's biggest retailer, gained 11% last month, according to data provided by S&P Global Market Intelligence, compared to a 2.8% boost for the broader market. 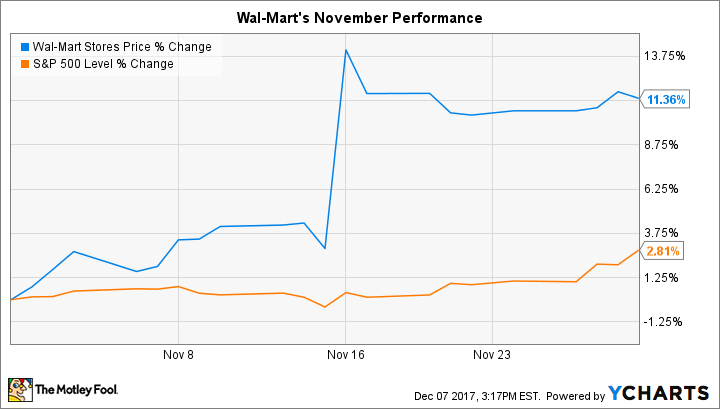 The increase contributed to an epic run for shareholders this year as Wal-Mart's 41% gain puts it in fifth place among the 30 members of the Dow in terms of year-to-date performance.

November's rally was sparked by a surprisingly strong third-quarter earnings report. In that Nov. 16 announcement, Wal-Mart revealed that comparable-store sales gains sped up to a 2.7% pace from 1.8% in the prior quarter as customer traffic growth improved. The retailer logged impressive results in its e-commerce business, too, with a 50% sales spike likely translating into market share gains in that key niche.

Contrary to many investors' fears, Wal-Mart is primed for a decent holiday shopping season thanks to a mix of rising digital sales and increasing customer traffic at its existing locations. But whether its stock price rally carries on into 2018 -- or falls flat -- will depend on management's ability to convert those top-line wins into profit growth since Wal-Mart's net income has now declined for two consecutive fiscal years.