The cloud-computing company behind the Wanke coin mining project appears to be benefiting from the bitcoin craze yet again.

Shares of cloud-computing company Xunlei (XNET -2.50%) surged as much as 30% Monday, recouping some of the more than 50% decline they had experienced since Thanksgiving. The stock was up 29.4% at the close, meaning it's now down about 39% since Thanksgiving.

The stock's rise on Monday was likely fueled by the recent rise in cryptocurrency prices. Since Xunlei launched its "Wanke coin mining project," which explores emerging blockchain technology, it  has benefited from bitcoin-related hype: Its shares are up more than 300% year to date. 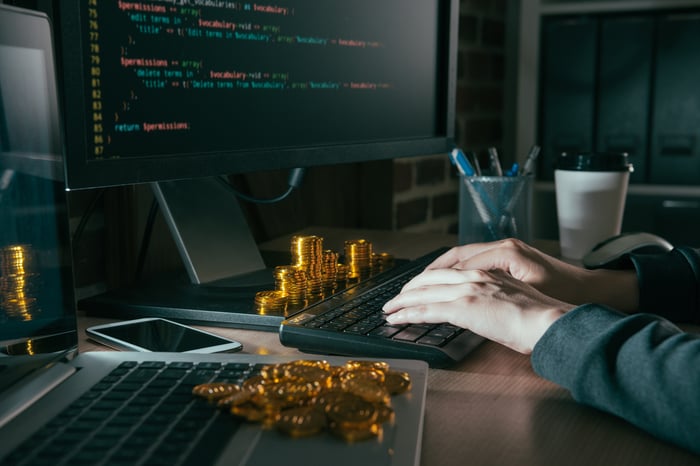 Bitcoin benefited Monday from the first bitcoin futures being traded on Sunday night. Bitcoin has risen a total of about $5,000 in the past week and is up 15-fold year to date.

But if cryptocurrency-driven speculation appears to be associated with Xunlei stock's rise, management has discouraged investors from making these connections. In a Nov. 29 press release, management said:

The Company believes that Wankebi is a kind of digital asset and can be used on the Company's internet properties and should not be traded on other transaction platforms. When developing blockchain technology, the Company utilizes such features as openness, transparence and security for their applications. Wankebi is only a symbol of proof for these applications, rather than a subject of speculation.

That Xunlei stock's rise is happening in conjunction with cryptocurrency hype should be a red flag for investors, especially since a company executive actively discouraged cryptocurrency-tied speculation in an interview with Bloomberg. Vice President of Marketing Dong Xue said he hopes investors are interested in the company "because of the future of 'shared computing' and their trust in our new management team, rather than for speculation."