Please ensure Javascript is enabled for purposes of website accessibility
Log In Help Join The Motley Fool
Free Article Join Over 1 Million Premium Members And Get More In-Depth Stock Guidance and Research
By Maxx Chatsko - Dec 12, 2017 at 9:51AM

Management has executed a turnaround strategy to cheers on Wall Street. Of course, there's still work to be done.

CEO Tim Go must not have checked his mail.

Against the odds, Go led a management team that executed a strategic turnaround and returned the company to profitability virtually overnight. The company course-corrected from a second-quarter 2016 net loss of $147.9 million to a net gain of $9.6 million in the second quarter of 2017. While the compnay has hit a hiccup recently -- a new reporting system has delayed its theird-quarter earnings release -- it hasn't deterred Calumet's stock from doubling so far in 2017.

That's about the only hiccup shareholders have been exposed to in 2017. Here's a recap of how Calumet Specialty Products crushed it this year -- and what work remains ahead in 2018. 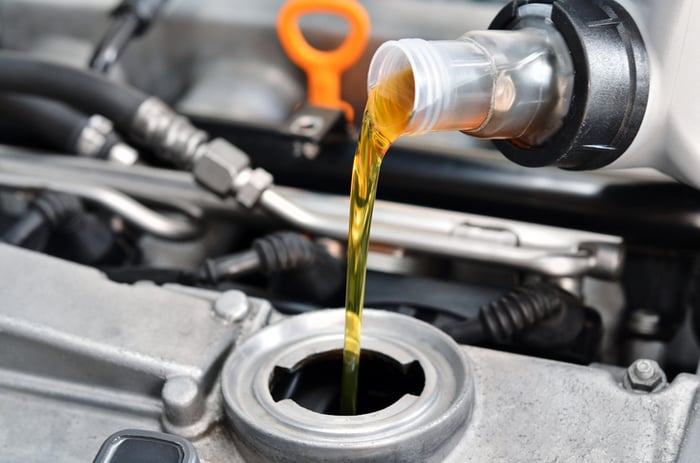 A successful turnaround (so far)

What has always been held up as a high-margin business model in the oil and gas services industry has rarely been so for Calumet Specialty Partners. The company last posted positive operating income for a full year all the way back in 2013. Thankfully, that dismal streak is likely to end this year. Operating income through the first half of 2017 has already eclipsed the total from all of 2013.

More importantly, financial performance has improved across the board compared to the year-ago period:

Unfortunately, investors have no insight into the company's performance after the second quarter of 2017. That's because Calumet Specialty Products announced that it needed more time to complete its quarterly Securities and Exchange Commission filing after adopting a new enterprise resource planning system on the first day of September. It's been over one month after the originally scheduled third-quarter 2017 earnings conference call, and the report has yet to be filed. While that could be a red flag for shareholders, Wall Street has so far been willing to give the company and Go the benefit of the doubt after an amazing refocusing of operations.

The successful turnaround has thus far been underpinned by divesting underperforming, low-margin assets to improve future earnings visibility and jettison excessive expenses from the income statement. Recent moves include the sale of its Superior, Wisconsin, refinery and its oil-field drilling products company Anchor Drilling Fluids USA, which netted the specialty chemical manufacturer a combined $576 million.

In addition to the windfall, Calumet Specialty Products has noted that the divestitures will free up capital that it can invest in growing its higher-margin specialty products. That promises to improve profitability going forward, which will be critical for cleaning up a balance sheet that has steadily deteriorated in recent years. The debt-to-assets ratio has swelled from 41% at the end of 2013 to 73% at the close of 2016.

The potential to use part of the proceeds from recent asset sales will certainly help to shore up the balance sheet, but this all-important goal seems likely to require a multiyear effort. Progress toward this end remains the most significant marker for shareholders to track throughout 2018, especially considering that it remains the last obstacle to reinstituting quarterly distributions.

Can Calumet Specialty Products keep it going in 2018?

Shareholders should be encouraged by the swift progress made by Go and the team in 2017. There's really no other way to describe the turnaround: Calumet Specialty Products crushed it this year. Assuming there aren't any material surprises in the third-quarter 2017 financial report once it's filed, investors have two things to keep an eye on in 2018.

First, the company's focus on high-margin specialty products needs to continue showing progress and healthy operations. A few more quarters of sustainable profits should alleviate any lingering concerns Wall Street may still have over the new direction. Second, management will need to demonstrate that the newfound earnings power will be put to good use. Continued investments in growth opportunities and cleaning up the balance sheet likely will be the best two options.

Another solid year of execution should put Calumet Specialty Products on track to reinstate its quarterly distributions, even if investors have to wait until the back half of 2018 for that to be announced. Of course, the timing isn't too important to long-term investors. By the time the dividend is reinstated, the company will have completed an impressive turnaround strategy -- and it all started in 2017.