All the better to build a business with.

Investors already knew that Facebook (META 0.48%) Messenger had recently reached 1.3 billion monthly active users (MAUs), which the social network disclosed in September, but now we're getting some more detail into the messaging service's growing usage. The company's Messenger team has included some fresh stats in a new blog post reviewing how 2017 went. 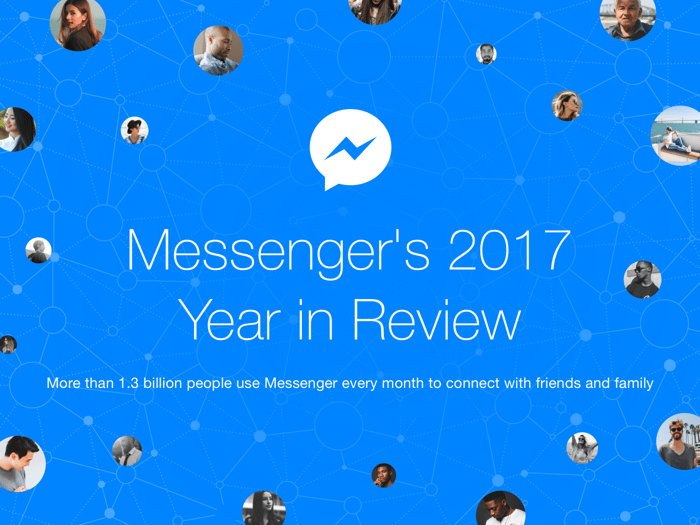 A handful of impressive usage stats

There were over 17 billion video chats made on Messenger this year, doubling the number of video chats that were made in 2016 on Messenger. In addition to one-on-one video chats, Messenger launched group video chats a year ago, while also adding a handful of augmented reality (AR) features over the summer when Facebook announced its big push into AR. The coompany said just yesterday that it was adding even more AR features -- called World Effects -- to Messenger.

Growing the number of video chats is particularly impressive when you consider the competition: Microsoft's Skype and Apple's FaceTime. Skype was a first-mover in video calling and enjoys a strong brand with broad cross-platform support, while FaceTime is directly integrated into iOS, so Messenger faces an uphill battle in video chatting but appears to be faring just fine.

Facebook says "visual messaging" -- which includes expressive tools like GIFs and emojis --is becoming a "new universal language." There were 500 billion emojis and 18 billion GIFs shared in 2017 through Messenger. On average, 7 billion conversations take place on Messenger every day, and 260 million new conversations are started.

Group messaging is also an increasingly popular feature, with 2.5 million new group chats started every day throughout the year. These group chats have 10 participants, on average.

These new stats are only specific to Messenger and do not include WhatsApp, Facebook's other messaging service, for which it paid handsomely. More broadly, Facebook is investing heavily in messaging as it looks to beat Snap at its own game. Snapchat's popularity among younger demographics shows that dedicated photo/video messaging services have earned a place at the social media table. Beyond Messenger, Facebook is also looking to highlight photo/video messaging in Instagram by potentially unbundling Instagram messages into a new app called Direct.

Messenger's growing usage and continued momentum will pave the way for inevitable monetization, which Facebook is starting to work on. Turning Messenger into a business may come in several forms, anything from connecting users with corporate chatbots for customer service or e-commerce to an ad carousel. It all starts with growing usage and engagement -- the money comes later -- and Facebook Messenger is crushing it on that front.