Please ensure Javascript is enabled for purposes of website accessibility
Log In Help Join The Motley Fool
Free Article Join Over 1 Million Premium Members And Get More In-Depth Stock Guidance and Research
By Jim Crumly - Dec 13, 2017 at 8:48AM

The company's stock has had huge gains this year. Is it too late to get in?

2017 has been an excellent year for Illumina (ILMN 3.62%), the market leader for gene sequencers, having revived sales growth thanks to the rollout of a new product line. Shareholders have been rewarded with a stock price that has increased 66% in 2017 after a couple of disappointing years in 2015 and 2016. But with the stock so much more expensive and an exceptional year behind it, is Illumina still a buy?

What makes Illumina so enticing to investors is its dominance of a market in the early stages of a long period of growth. The ability to read the genetic codes of people, animals, plants, tumors, and microbes is leading to rapid advances in precision medicine, agriculture, and forensics.

But, despite the steady tailwind of growing demand for genomic tools, Illumina has a rather cyclical business. Illumina makes its money by selling the instruments to sequence DNA and RNA and the consumables that are used with each run. In fact, 64% of Illumina's sales in 2016 came from the "razors" of this razor-and-blade model, and another 15% was from services. One might think this high percentage of recurring revenue would add stability to the company's growth rate, but in fact, the two product categories are closely linked, with growth in instrument sales creating corresponding growth in consumables a quarter or two later. 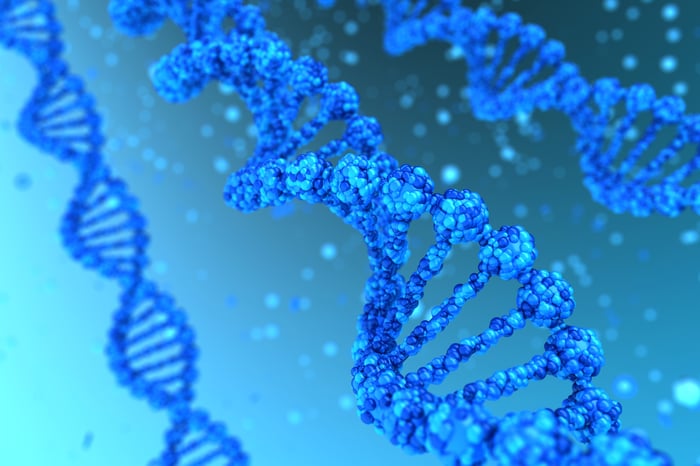 When Illumina introduced the HiSeq 2500 in January 2012, it gave its customers the ability to sequence an entire human genome in a single day. The product was an instant success, sales soared, and investors were rewarded with a 79% gain that year. In January 2014, the company introduced two new families of products, the desktop NextSeq and the high-end HiSeq X, which brought the cost of sequencing the human genome down to $1,000. Again, the new product created a burst of new sales as existing customers upgraded and new customers were drawn in, and investors bid the stock up 60%. 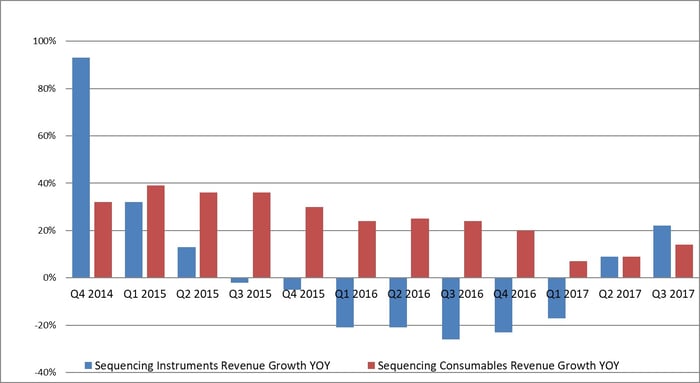 But, as this chart shows, starting in 2015, the growth rate of instrument sales started falling off, and they actually started shrinking in Q3 of that year. As instrument sales declined, the growth in consumables sales was dragged down with it. By Q4 of last year, overall revenue growth had sunk to 5%, and it is not surprising that the stock price languished, too, down 29% last year.

The problem was with Illumina's product lineup. The older, midrange HiSeq line had become something of a "tweener." It had a significantly higher price than the desktop NextSeq, but higher operating costs than the top-of-the-line HighSeq X. Customers were buying down to NextSeq to save on acquisition costs, and those machines have a lower utilization rate than models higher up in the line. The HiSeq product line, which had formerly been the company's flagship line with a big installed base, was underperforming, both in terms of sales and utilization rates.

NovaSeq to the rescue

When Illumina introduced NovaSeq in early January 2017, investors cheered and sent the stock up 17% in a day. The product will eventually replace both the aging HiSeq line and the HiSeq X line for a price of $985,000, compared with $10 million for the HiSeq X Ten. Usage costs are significantly lower than those of the products it's replacing, and Illumina believes NovaSeq will usher in the era of the $100 human genome.

The product solves more than one problem for Illumina's business. First of all, it's the best sequencer ever, offering a combination of speed and cost that has never been available before. Additionally, it has simplified and rationalized the company's product lineup, reducing the number of products and giving customers a clear choice based on work volume and budget. The strategy's working: Company officials have said some NovaSeq sales are going to customers buying up from NextSeq, a reversal of the previous situation. And finally, because the technology can sequence a human genome in an hour and eventually for $100, NovaSeq will open up new uses for sequencing, especially where large volumes are required.

How long will the growth spurt continue?

NovaSeq is stimulating growth in three ways. First, there is an upgrade cycle as existing customers replace their machines to get higher speeds and lower operating costs. Illumina thinks that the vast majority of its 800 HiSeq customers will upgrade to NovaSeq, and over 10% of them have already put in orders. Then there are new customers. In the last quarter, one-third of NovaSeq sales were to customers who were either new to sequencing or were moving up from the desktop line. Finally, the new applications that the lower operating costs enable will result in higher utilization rates and more product sales as researchers win grants to do studies that never were feasible or economical before.

Illumina believes that the upgrade cycle is a wave that will last three to five years. Given that we have only seen one full quarter of unconstrained NovaSeq shipments, it's clear that the wave is only just getting started. And momentum for gene therapies in the biotech industry is growing, potentially stimulating new demand. Illumina officials cited the recent FDA approval of Novartis' Kymriah as the first CAR-T immune cell therapy as evidence that a world of possibilities for gene and cell therapies is just opening up, and sequencing is an important enabler for their discovery.

Illumina isn't cheap. The stock has run up in anticipation of what NovaSeq will do for sales, but that story is just getting started. Shares sell for 62 times trailing-12-month non-GAAP EPS, which excludes some big one-time income, and 47 times analyst estimates of 2018 EPS. But Illumina stock has never been cheap, and analysts have been underestimating Illumina's earnings -- by 12% last quarter and 20% the quarter before -- as the new product ramps.

It's certainly reasonable that the valuation would get a boost on the promise of rejuvenated sales, but it still is below what it attained during Illumina's last product introduction cycle. If the current cycle plays out as expected and Illumina continues to find success with subsequent cycles, there would be no reason to expect valuation multiples to return to what they were during the gloom of late 2016. 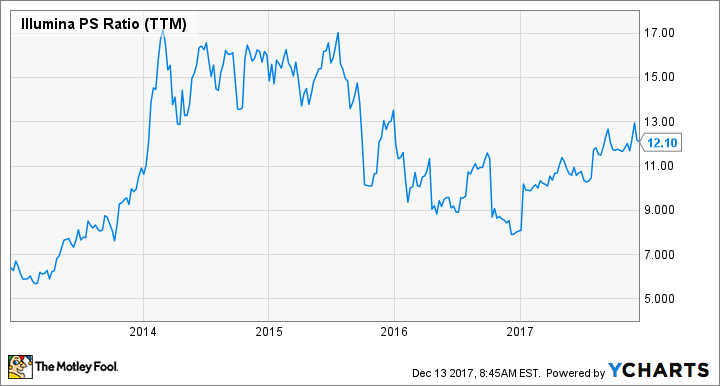 So is Illumina a buy now?

I think long-term investors will do well buying and holding Illumina stock, even at today's price. Yes, the stock sells for a premium price, so there is a risk that a setback, either in the company's business or in the market overall, would hit the stock. But compared to what investors have historically been willing to pay, the valuation is not out of whack.

Illumina's business is cyclical, based on advances in technology, and current multiples of sales and earnings are still below the company's valuation during the other recent peaks of the business in 2010, 2012, and 2014. The current cycle is just getting started and promises to continue for multiple years, and the company is investing more than half a billion dollars annually in research and development to fuel the next wave of products. The market environment has never been better, the company's dominance continues, and its cash hoard has grown to $2 billion. Illumina is a buy.