Stocks were mixed on Wednesday, as the Dow Jones Industrial Average (DJINDICES:^DJI) set a record, but the S&P 500 (SNPINDEX:^GSPC) closed slightly down.

The Fed raised short-term interest rates today, but a sense that it may not be as aggressive as expected about future increases gave gold stocks a boost, and the VanEck Vectors Gold Miners ETF (NYSEMKT:GDX) jumped 3.5%. The retail sector was also strong; the SPDR S&P Retail ETF (NYSEMKT:XRT) closed up 1%.

As for individual stocks, Finisar Corporation (NASDAQ:FNSR) made a big gain after getting help from Apple (NASDAQ:AAPL) to increase production capacity, and Nordic American Tanker Limited (NYSE:NAT) sank after announcing a secondary stock offering. 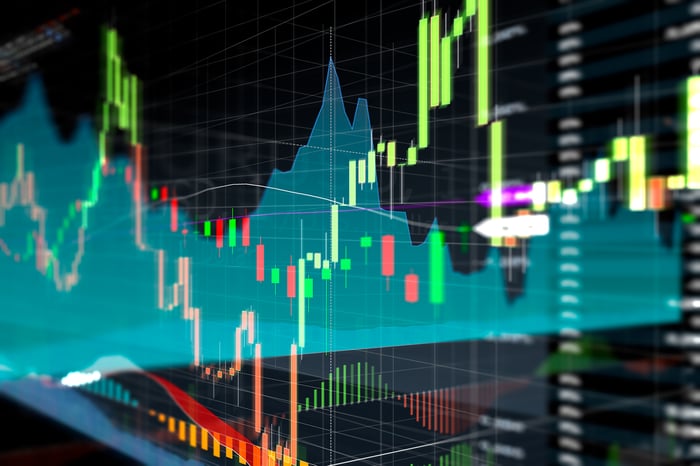 Shares of Finisar, a maker of components for high-tech optics systems, soared 22.8% after Apple announced it was awarding the company $390 million from its Advanced Manufacturing Fund. The purpose of the award is to allow Finistar to expand Texas-based production of vertical-cavity surface-emitting lasers (VCSELs), the 3D-sensing component that Apple uses in its iPhone X for facial recognition and in its AirPods for proximity sensing.

Earlier this quarter, Finisar spent $20 million to buy a 700,000-square-foot manufacturing facility in Sherman, Texas, and the funds from the tech giant will be used to make Sherman the "VCSEL capital of the US," creating more than 500 high-skill jobs. Beyond the job-creation headlines, Apple will benefit by ensuring the supply of a scarce technology as it expands facial recognition to other iPhone models, likely late in 2018.

"Apple has rapidly adopted depth-sensing technology in recent years, leading to the development and production of the most advanced VCSELs used in the history of consumer electronics," said the company press release. "In the fourth quarter of 2017, Apple will purchase 10 times more VCSEL wafers than were previously manufactured worldwide over a similar time period." Shipments from the new facility are expected to begin the second half of 2018.

Finisar's core products are used for high-speed fiber optics in telecommunications and data centers, so the 3D-sensor line is a new growth area for the company. In a conference call last week, company officials said the new factory could have the capacity to produce $100 million in revenue per quarter. Finisar's total revenue last quarter was $332 million, so 3D sensors could have a big impact -- a fact that was mostly ignored by the market until today's announcement from Apple.

Nordic American Tankers announced the details of a secondary public offering, sinking its stock today. Nordic American will raise $110 million by issuing 40 million shares at $2.75 each. Not surprisingly, the market decided that the offering price was about what the shares must be worth, and sent the stock plummeting, down 27.8% to close at $2.65.

Nordic plans to use the proceeds to recapitalize the company by paying off some of its net $341.5 million in debt and financing growth. The company's CEO and his immediate family have bought $1 million worth of shares at the offering price.

The market capitalization of Nordic American stood at $270 million after today, so the new stock represents a major dilution for current shareholders. The company had to do something to improve its capital structure, though. Tanker rates are down, the company lost $34.3 million last quarter, and it paid out over $51 million in dividends. It also will be taking delivery of three new ships next year, and 70% of the cost of them will need financing. Necessary or not, investors were surprised at the low offering price and made a wreck of the stock.