Shares of Finisar (NASDAQ:FNSR) have soared today, up by 30% as of 12 p.m. EST, after the company scored a $390 million investment from Apple (NASDAQ:AAPL). The investment was awarded from the $1 billion Advanced Manufacturing Fund that Apple set up in May of this year, which is dedicated to supporting innovation and job creation domestically. Apple previously awarded $200 million to another supplier, Corning, out of the fund.

The money will help Finisar boost its research and development spending and ramp production of vertical-cavity surface-emitting lasers (VCSELs), the sensors that are a critical piece of the new 3D-sensing TrueDepth camera system in iPhone X. Considering the iPhone X's expected volumes, Apple is now a huge purchaser of VCSEL arrays. 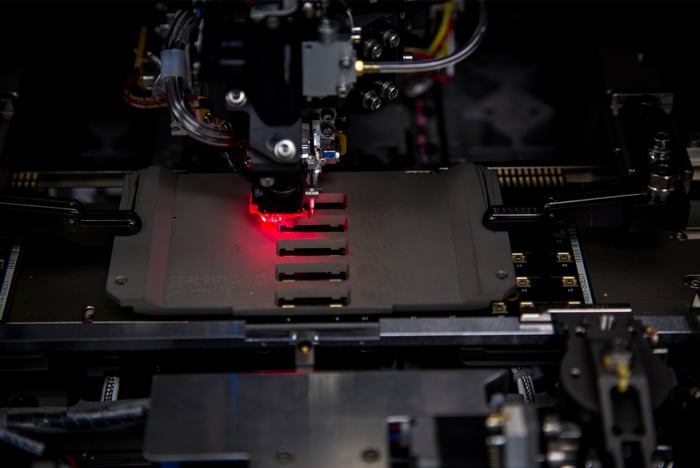 "In the fourth quarter of 2017, Apple will purchase 10 times more VCSEL wafers than were previously manufactured worldwide over a similar time period," according to the Mac maker.

Finisar is in the process of acquiring a new facility in Sherman, Texas, to expand its manufacturing capacity, and the Apple award will help cover the costs. On its earnings call earlier this month, Finisar said the facility was acquired for $20 million, and the project will create 500 high-skill jobs. All of the VCSELs that Apple purchases from Finisar will be made in Texas, including at another nearby facility in Allen, Texas. Apple is also helping secure renewable energy to power the new facility.

"VCSELs power some of the most sophisticated technology we've ever developed and we're thrilled to partner with Finisar over the next several years to push the boundaries of VCSEL technology and the applications they enable," Apple COO Jeff Williams said in a statement.