Instead of surging, however, II-VI stock crashed, as investors rebelled at the premium II-VI was paying (nearly 40% above Finisar's market price). From a share price near $47 before the acquisition was announced, II-VI stock plunged 17% in a day, and then kept on falling. 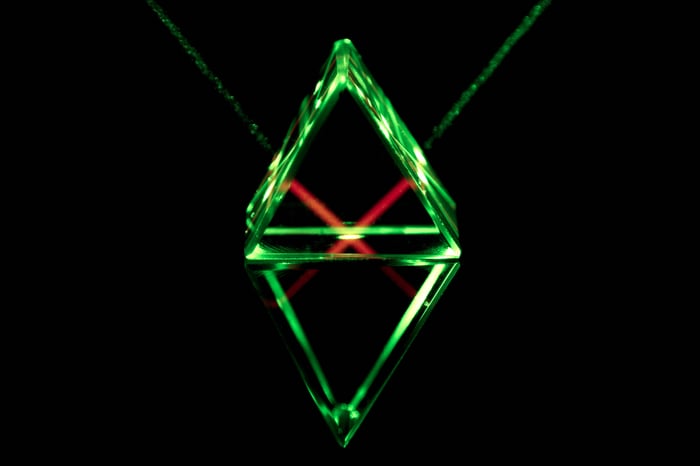 Until today, that is. On the final trading day of 2018, analysts at Northland Capital gave II-VI its first upgrade since the Finisar acquisition announcement, helping to lift shares more than 2% in morning trading.

As TheFly.com describes Northland's reasoning, "[T]he pullback in shares following the Finisar [acquisition] discounts an overly negative view" of II-VI's prospects. With Finisar in-house, and assuming at least some "synergies" from cutting costs as the two operations are combined, Northland believes that II-VI should be able to earn "nearly $4/share" pro forma going forward.

In Northland's view, it's reasonable to assign about a 10 times multiple to that earnings estimate, and so the analyst is upgrading II-VI stock to outperform and assigning a $40 price target.

Is that a reasonable expectation? According to data from S&P Global Market Intelligence, last year, II-VI earned $1.35 per diluted share, while Finisar lost $0.42 per share. Over the last 12 months, the numbers aren't much more encouraging -- II-VI has trailing profits of $1.43 per share, true, but Finisar has trailing losses of $0.85 per share.

Combining the two operations, therefore, appears more likely to result in an II-VI earning less than $1 per share going forward -- not more than $4 a share -- even if we assume that Northland is right about the two companies, having merged, being able to cut at least some costs through synergies.

Thus, combining the operations and valuing them on their free cash flow, II-VI-Finisar would have reported not just weaker profits than II-VI earned alone -- but actual negative free cash flow.

Aside from that, Mrs. Lincoln, how was the play?

And that's the good news. The bad news is that recent rumors about Apple cutting orders from its iPhone suppliers are making investors feel even more negative about II-V's prospects.

Although neither II-VI nor Finisar appear to be major suppliers to Apple (and thus, selling II-VI stock on worries about the Mac maker's business may be an overreaction), even a small exposure to the tech titan's troubles would be an incremental negative for II-VI's business in the near term. Given the already marginal profitability, and even weaker free cash flow performance of these two companies, I really don't think II-VI needs any more bad news at this point.

Given how unrealistic Northland's prediction of "nearly $4/share" in earnings for II-VI appears to be, I can't endorse the analyst's buy recommendation today. Northland is wrong to recommend II-VI stock.