After rising a little over 5% during the balance of last month, Momo shares slid nearly 19% on Nov. 28, following the release of the company's third-quarter 2017 earnings. Momo reported net revenue of $354.5 million, a spectacular increase of 126% over the prior-year quarter, in keeping with recent off-the-charts quarterly top-line growth. Net income roughly doubled versus the comparable quarter, to $79.1 million.

Yet sequentially, revenue expansion is slowing, and this has unsettled Momo investors. Using the fourth quarter of 2016, in which Momo booked revenue of $246.1 million, as an anchor point, the company's top line has advanced at a compounded quarterly growth rate of 13% this year. Management's projection of fourth-quarter 2017 revenue of $370 million to $385 million indicates single-digit sequential growth between the third and fourth quarters.

The implication of the numbers above? After lapping current-year growth, it's entirely possible that the social network's total revenue expansion for next year could fall somewhere between 40% to 50%.

As my Foolish colleague Leo Sun discussed in a recent, more detailed article on Momo, this relatively slower growth is a concern due to potential market pressure from newer live video apps developed by able competitors like Weibo and YY. Live video has been Momo's primary growth driver this year -- it comprised 85% of total revenue during the quarter.

Also worrisome is the company's rising cost of revenue. This income statement line item includes Momo's costs to maintain its platform (labor costs, bandwidth costs, and depreciation, for example), but also the commissions and referral fees the company pays to broadcast networks and agencies for distribution of its live video service. Cost of revenue was 45% of total revenue in 2016, but it's increased in 2017, hitting 50% in the company's most recent quarter.

The escalated cost of revenue is necessary, as active users have plateaued at 4.1 million for the last three quarters. Momo is spending more to increase its revenue per paying, active live video customer. 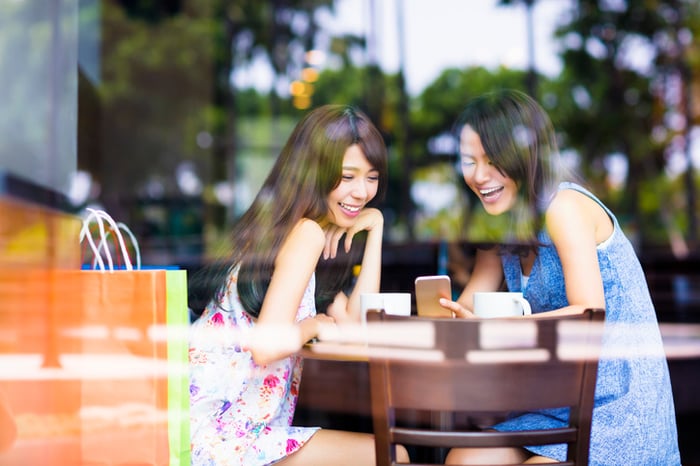 Momo's ability to wring additional revenue out of each active live video customer -- despite stalled user base growth -- is impressive, yet concerns remain. Clearly, the yield on referrals and commissions has declined in 2017, as rising cost of revenue threatens to converge with a deceleration in overall growth rate. The organization still exhibits much potential, but a measure of caution around these shares in 2018 wouldn't be misplaced.