Yesterday, Apple (NASDAQ:AAPL) announced that it had awarded $390 million to Finisar (NASDAQ:FNSR) as part of a brilliant bet on the future of 3D sensing. However, Apple interchangeably referred to this sum as an "award" as well as an "investment," which led to some head-scratching among investors. Did Apple take a stake in Finisar? Confusion around the answer to that question may have contributed to the 23% pop that Finisar shares enjoyed yesterday.

Oddly, there wasn't a similar misunderstanding when Apple announced an award/investment in Corning earlier this year (and Corning shares barely budged), though the award was even more explicitly referred to as "Apple's investment," while yesterday's announcement mostly referred to "Finisar's significant investment." 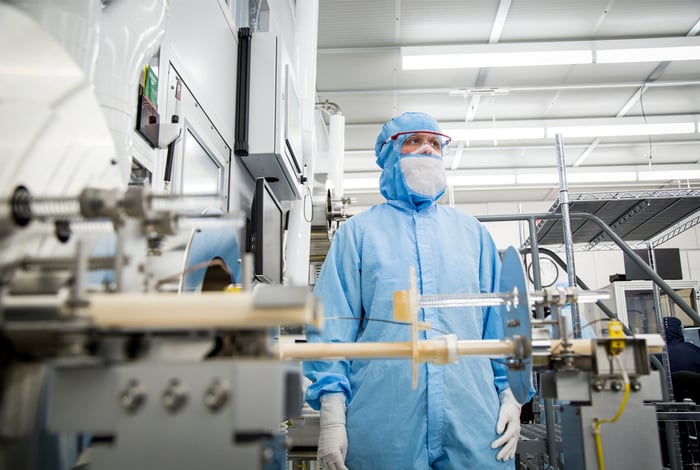 Apple did not invest in Finisar

In response to the uncertainty, Finisar issued a statement and filed it with the SEC:

Questions have arisen regarding news reports of Apple Inc.'s ("Apple") announcement this morning regarding a $390 million award to Finisar Corporation ("Finisar"). Apple has not made a debt or equity investment in Finisar. The amount referred to by Apple represents anticipated future business between the companies over a period of time.

Apple is not taking an equity stake in Finisar, nor does the award represent a debt investment of any type. In that case, what exactly is Apple actually getting for its money? Will it own some of the manufacturing infrastructure? Judging by Finisar's language above, it looks like the $390 million is essentially a prepayment for future purchases of 3D-sensing components -- those vertical-cavity surface-emitting lasers (VCSELs).

In other words, you can consider it an investment in Apple's future component needs and supply chain.

Apple prepays suppliers all the time

Prepayments for components are actually a huge part of Apple's supply chain, and have always been. This line has long been a fixture of Apple's regulatory filings: "In addition, the Company has made prepayments associated with long-term supply agreements to secure supply of inventory components."

In fact, Apple's doomed partnership with GT Advanced Technology a few years back for sapphire was structured in a similar fashion: Apple made several prepayments that were intended to be redeemed toward future sapphire purchases. These prepayments helped GT Advanced fund the construction of a facility in Mesa, Arizona (which has since been repurposed as a data center). GT Advanced was not in the greatest financial position, and needed this money upfront for the project to move forward. Worse yet, the supply agreements would have let Apple buy sapphire from GT at prices "below market value."

Despite some similarities, the deal with Finisar is very different. First of all, Finisar is in a stronger financial position, and Apple's money is essentially accelerating the timeline of Finisar's ramp. The VCSEL market is expected to boom in the years ahead thanks to demand across many applications, and Finisar was already interested in ramping capacity. On an earnings call in March, CEO Jerry Rawls said, "We are going to produce in calendar year 2017, many, many more VCSEL than we have ever produced in our history." Finisar can expand capacity a lot faster now.

It's also worth noting that prepayments are actually a form of debt, just not a debt investment. Finisar hasn't earned or recognized that revenue yet, and hypothetically could be on the hook to pay it back if things go sideways, like in GT Advanced's case. Apple isn't a debt investor, but might effectively be a creditor (like any customer a company might owe a refund to). It just so happens that Apple will presumably accept components as repayment. This was how the GT Advanced deal was set up: It would repay what it owed to Apple in the form of sapphire.

While GT Advanced had filed its supply agreements with the SEC for investors to see (since the Apple deal would have transformed GT Advanced dramatically), Finisar has not. These agreements included important provisions that GT Advanced could not supply sapphire for other consumer electronics products. Whether or not Apple's supply agreements with Finisar include similar provisions is what I'm most interested in, because if so, then Apple may be able to preclude Android rivals from catching up in 3D sensing (at least in meaningful volumes) for years.