Considering how much Apple (NASDAQ:AAPL) has fallen over the past seven months, it might seem that investors are having commitment issues. Instead of sticking with the Mac maker for the long term, shareholders are moving on and looking for the next hot growth story. Well, Apple has some commitment issues of its own.

As part of managing a massive global supply chain, Apple has numerous off-balance sheet commitments related to third-party manufacturing and component purchases. This is an aggregate figure that I keep an eye on for hints as to what Apple is expecting in the near-term, since the metric is related to Apple's projected "demand information."

Third-party manufacturing and component commitments soared in September to $21.1 billion and declined modestly in December to $18.9 billion. In the March quarter, this total just dropped precipitously back to previously seen levels. 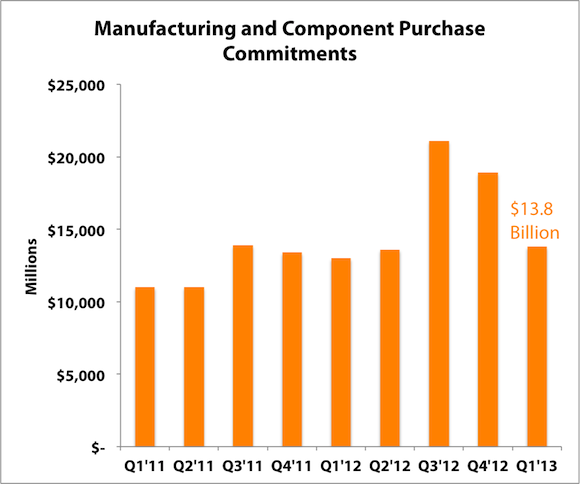 On top of these commitments, Apple is also on the hook for an additional $1.4 billion to acquire manufacturing gear. This is in line with its projected capital expenditures this year, most of which is dedicated toward manufacturing equipment.

There are a couple ways to interpret the drop in third-party commitments.

The component commitments are composed of "purchase orders, supplier contracts, and open orders." Many company's frequently double order components in the face of low manufacturing yields for certain newer ingredients. Better to have it and not need it than need it and not have it, so they say.

As yields improve, companies will cancel or reduce these duplicate orders that are no longer necessary. Presumably, "open orders" can be modified or cancelled. This is the most likely explanation of the display order reductions reported months ago, especially since the quoted figure of 65 million was astronomical.

Apple launched an unprecedented number of new products late last year, many of which faced manufacturing challenges and supply constraints. It was potentially double-ordering some components, and improving yields are bringing down its orders.

Additionally, Apple's orders usually cover periods of up to 150 days, or five months. Tim Cook just implied that new products aren't due out until this fall, which is about five months from now. The reduced commitment activity may be more evidence that Apple's not ready to enter a production ramp for new devices quite yet.