You just gotta know where to look.

Last week, Apple (AAPL 0.76%) reported its fiscal fourth-quarter results, closing out the company's fiscal 2012. Days later, the Mac maker has now officially filed its 10-K annual report with the SEC, containing a treasure trove of interesting details and tidbits about the inner workings of the largest tech company on Earth, as well as hints about its future.

What can investors find inside?

Money, lots of money
On the conference call, CFO Peter Oppenheimer alluded to how much of Apple's money mountain was located offshore. He gave an approximation, and I tend to wait for the official filings for a more precise figure. The amount of cash held by foreign subsidiaries is now $82.6 billion. This is actually a rather modest sequential increase from the $81.4 billion held overseas last quarter. 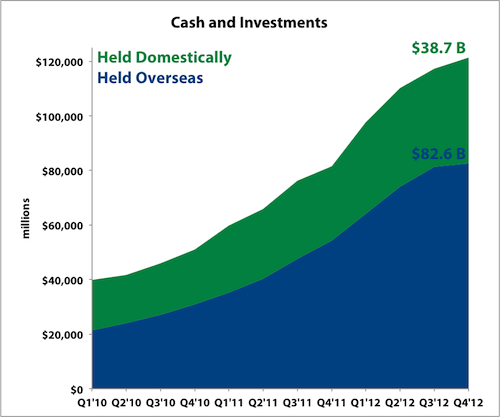 In fact, this quarter saw the smallest sequential increase in overall cash position in years, "only" rising by $4 billion. Over the past three years, Apple has consistently added to its coffers by at least $5 billion per quarter, and as much as $16 billion in the first fiscal quarter of this year (last December's monster quarter).

One important contributing factor is that Apple just resumed its dividend last quarter, with $2.5 billion in payments made in August. The company also announced another $2.65 per share dividend being paid out this month. At current prices, that puts Apple's dividend yield at about 1.8%, the same as IBM's (IBM 0.67%), but less than other tech heavyweights like Microsoft (MSFT 1.45%) and Intel (INTC 1.73%).

Apple boasts a slightly higher payout ratio than Big Blue though, giving back over 30% of earnings per share last quarter compared to IBM's 25%. Mr. Softy and Chipzilla boast higher payout ratios than Cupertino along with their higher yields.

Retail expansion
Apple retail stores are now located in 13 countries, including the U.S. Apple opened 33 retail stores in fiscal 2012, of which 28 were located outside of the U.S., and finished the year with 390 stores. That total is comprised of 250 domestic locations and 140 international locations. Average revenue per store increased 19% in fiscal 2012 to $51.5 million.

Next year, Apple is targeting between 30 and 35 new retail stores, with 75% of these abroad. Ideally, Apple will put a good portion of these locations in China, its hottest geographical growth segment. As of right now, there are only 8 Apple stores in Greater China, which includes Hong Kong.

Meanwhile, the company is now looking for a new retail chief after John Browett's short tenure has now concluded.

Expecting a blowout
Saving the best for last, Apple has also provided a major clue that it's expecting a blowout quarter for the holidays. We already know that Apple's characteristic lowball guidance calls for $52 billion in revenue in the current quarter, which would top last December's $46.3 billion and set a new all-time record for the iPhone maker.

We also know that Apple likes to throw its weight around in the component supply market, frequently locking down what it needs through a combination of inventory component prepayments as well as off-balance-sheet third-party manufacturing and component purchase commitments. I track both of these figures closely to gain insight into what Apple's expecting, since the company makes these decisions based on "projected demand information."

Inventory component prepayments actually declined sequentially by about $200 million and now sit at $4.2 billion. This figure is recorded as an asset on the balance sheet, with $1.2 billion considered current. This figure actually isn't the aforementioned major clue, but the next one is.

Apple's manufacturing and component purchase commitments have just skyrocketed sequentially to $21.1 billion. That's an increase of $7.5 billion compared to the last quarter and is Apple's highest by far. 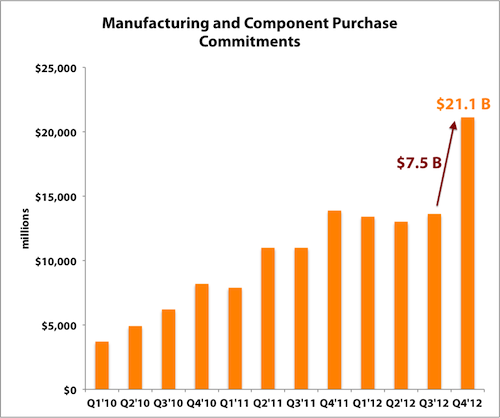 These off-balance sheet commitments are effectively debt that Apple owes, even though it technically has no on-balance-sheet debt. That means that Apple is gearing up to meet massive demand for the arsenal of products that it's unveiled over the past two months, which it expects to drive 80% of revenue this quarter.

That's a big commitment, so the company must be confident in its demand forecasts. This is the clearest sign that Apple is expecting a monster quarter.