2017 has mostly been a year to forget for Spirit Airlines (NYSE:SAVE) investors, with a wave of pilot-related cancellations and a devastating hurricane season wreaking havoc on the company's results. Though the stock has bounced back a bit from its most recent lows, it's still down 28% year to date. However, data released recently by Spirit shows underlying improvements in two key metrics -- unit costs and on-time arrivals -- setting the company up for what should be a much better 2018 and beyond. 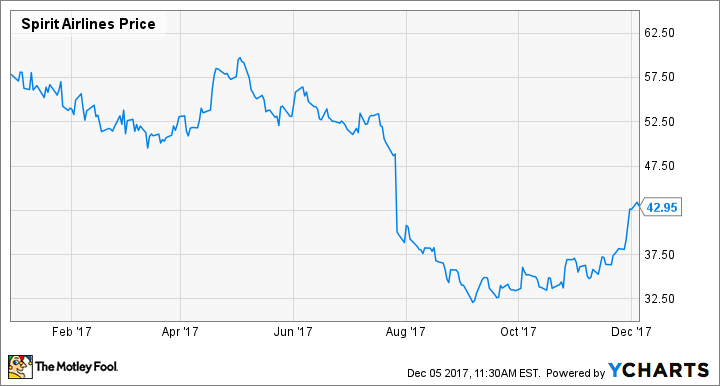 A low-cost advantage that's only getting larger

Spirit offers customers rock-bottom fares that are far lower than traditional airlines. The company is able to offer those fares by packing more seats into the same amount of space than its competitors, flying its aircraft more hours per day, and operating without costly amenities like first-class service or airport lounges. As a result, the company has always enjoyed a healthy unit-cost advantage over its competitors. But Spirit's most recent investor presentation reveals just how much that gap has been widening.

On a trailing-12-month basis, five years ago, Southwest Airlines' unit costs were 14% higher than Spirit's. Today, they're 38% higher -- an increase of 24 percentage points. At United, the difference is even more pronounced, with Spirit's relative cost advantage widening by 39 percentage points over the same period.

Spirit's capacity growth has contributed to its impressive cost performance as the company benefits from its scale, with fixed expenses being spread over an increasing number of available seat miles. But according to the company, the larger factor has been the company's relentless focus on controlling costs. Even better for investors, the company expects the unit-cost gap between Spirit and its rivals will continue to increase over the next five years as it keeps adding capacity (available seat miles) more quickly than the competition. In 2018 alone, Spirit is planning capacity growth of 22% to 25%.

This should help moderate fears that Spirit is susceptible to prolonged fare wars with legacy carriers like United, because over the long term, competing on price just doesn't make sense for airlines with such dramatically higher cost structures.

Spirit's fourth quarter is off to a great start in one important area: on-time arrivals. Since CEO Bob Fornaro took the reins in early 2016, the company had been stressing the importance of improving its on-time performance, and had made some good strides through the early part of 2017 -- right up until a pilot-related work stoppage in May and the 1,600-plus cancellations caused by the hurricanes.

But Spirit rebounded big-time in October: With an impressive on-time performance of 87.1%, Spirit said it "expected to land near the top of monthly industry rankings." For context, according to the Department of Transportation, out of the 12 largest carriers, for the 12 months ending September 2017, Spirit ranked 11th.

When the final DOT report for October was released, Spirit's monthly performance was good for a No. 3 finish in the rankings, beating both United and Southwest. For a company that has historically landed closer to the bottom of the DOT rankings, that's a big turnaround.

Admittedly, one month doesn't make a trend, and Spirit still has a long way to go to be seen as a reliable airline. But Fornaro appears to be serious about making operational improvements to improve the airline's public perception. If Spirit can eventually shed its reputation for poor service, while continuing to widen its cost advantage versus its peers, the next couple years could turn out very well for current shareholders.