Please ensure Javascript is enabled for purposes of website accessibility
Log In Help Join The Motley Fool
Free Article Join Over 1 Million Premium Members And Get More In-Depth Stock Guidance and Research
By Travis Hoium – Dec 15, 2017 at 7:17AM

Wynn Resorts could have its sights set on another megaresort after buying 38 acres of land on the north side of the Las Vegas Strip.

Steve Wynn is arguably the most important figure in the history of the Las Vegas Strip, developing the Mirage, Treasure Island, Bellagio, and Wynn Las Vegas. This week, we found out that his days building new properties on the Strip may not be over.

Wynn Resorts (WYNN -2.05%) announced that it has acquired 38 acres of land directly across Las Vegas Boulevard from the existing Wynn Las Vegas resort for $336 million. The land is arguably the most valuable contiguous property in Las Vegas, just north of Fashion Show Mall, and if a resort is eventually built, it could magnify a new high-end focus on the north end of the Strip. 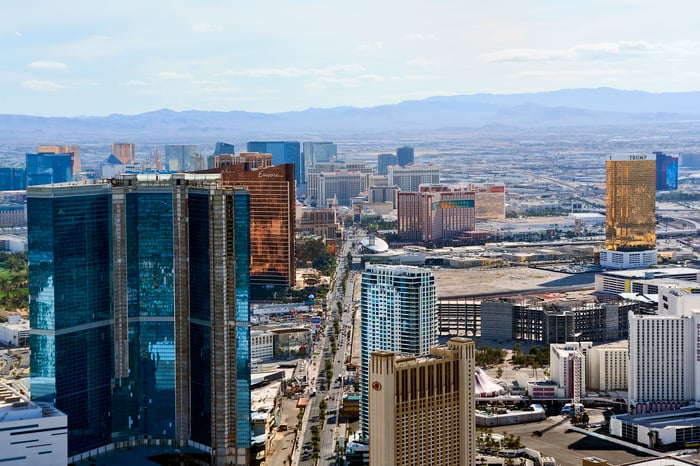 Just before the recession hit in 2008, there were three major plots of land consolidated with the hope of building new megaresorts on The Strip. One was Fontainebleau, which is a partially completed tower on the far north end of the Las Vegas Strip and was recently sold for $600 million. Another was the site of Resorts World Las Vegas, which is a $4 billion-plus resort that's expected to be completed around 2020. The third is the 34 acres James Packer formerly owned with the intention to build Alon Resort, the site Wynn just acquired. When combined with another four acres connected to the site, Wynn Resorts controls a valuable plot of land, which the press release highlighted:

The agreement completes a unique assembly of contiguous real estate of approximately 280 acres that spans from the Las Vegas Convention Center on Paradise Road from the east to Industrial Road on the west. The combined frontage on the Las Vegas Strip is over 3,500 feet, including rights to approximately 1,000 acre feet of water. It is adjacent to nearly 6 million square feet of convention and exhibition space.

There haven't been publicly announced plans to develop the property and there's reason to think Wynn Resorts has priorities elsewhere, but on the Las Vegas Strip, the hardest asset to acquire is land. That's why this was a massive acquisition for the company.

Betting big on the U.S.

I was also a little surprised by the acquisition because Wynn Resorts is already spending billions to expand in the U.S. Wynn Boston Harbor is a $2.4 billion project that's early in the construction phase, and the company will soon break ground on a new tower and other amenities where the golf course currently sits behind Wynn Las Vegas.

The developments are notable because Wynn's debt load has ballooned to over $10 billion in the last few years as it built Wynn Palace in Macau. These new projects could add to the debt level unless current operations can fund growth organically. 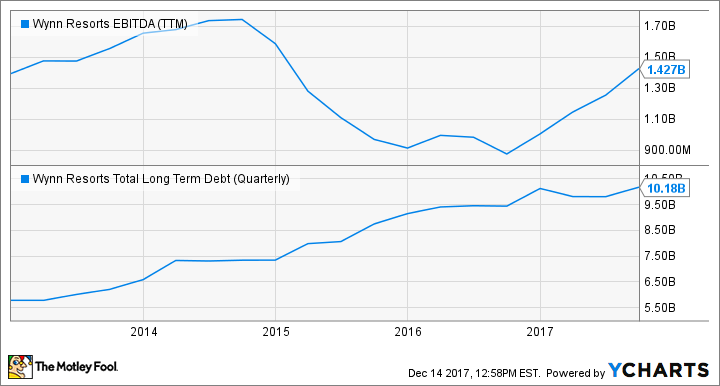 I will point out that the EBITDA level above, which we use as a proxy for cash flow from a resort, will likely rise significantly as Wynn Palace ramps up operations. In total, Wynn Palace, Wynn Macau, and Wynn Las Vegas should churn out at least $2 billion in EBITDA each year, some of which will be used to fund growth.

Whether Wynn Resorts decides to develop its new site soon or waits a decade, it's clear the company is collecting assets with long-term value on the Las Vegas Strip. That's something Steve Wynn has done his entire career, and this is an opportune time to buy the 38 acres across from Wynn Las Vegas. Time will tell whether a new resort is on the horizon or if this will be a stretch of incredibly valuable sand for years to come.