Priced under $200, Facebook's new standalone VR device could be the first all-in-one headset to reach tens of millions of consumers.

Despite nearly two years of hype around the Oculus Rift and HTC Vive, there are still short of 2 million of those high-end virtual reality headsets in consumers' hands today. Even adding in the 2 million headsets for Sony's (SONY 1.14%) PS4, that's still only around 4 million devices out there offering a fully immersive experience.

To take the VR industry to the next level, companies need to make their technology both more accessible and less expensive. Most homes and businesses don't have computers with the high-end graphics cards required to run VR headsets, and most consumers don't want to spend over $1,000 (nor take up a room's worth of space) to install a VR system at home. Facebook (META 1.70%) and HTC have been trying to tackle that problem, and with the planned 2018 debuts of the Oculus Go and Vive Focus (in China only, for now), they may succeed. The new Oculus device, in particular, may finally achieve the sales numbers required to take VR mainstream in the U.S. 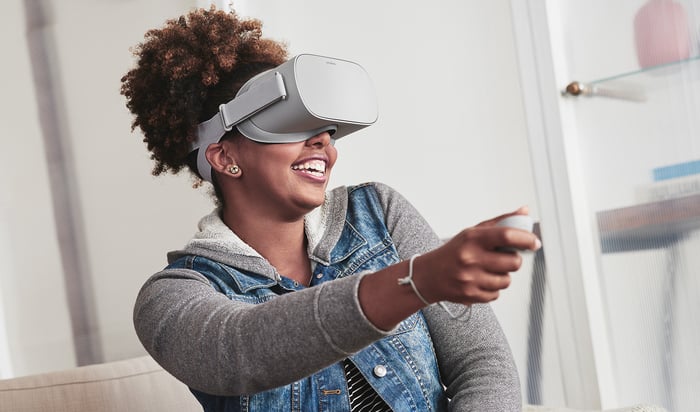 What is Oculus Go?

The Oculus Rift is one of the top virtual reality headsets on the market today, offering an immersive VR experience and industry-leading content. But the headset has to be tethered to a computer, and its use is confined to the space that can be "seen" by Oculus sensors.

The Oculus Go headset will create a similar feel of immersion, but it stands alone, requiring no support from a computer. In this, its somewhat like a Samsung Gear VR or Google (GOOG 2.36%) (GOOGL 2.39%) Daydream headsets, but those devices require the processing power and screen of a separate smartphone. The Go does not. This reduces the cost from as much as $1,000 for a headset plus a smartphone, to $200 for a purpose-built headset with its screen and processors built in.

The Go headset comes with a separate controller that will provide a way for users to control videos, games, and other experiences. It'll be a full VR experience all in one contained device.

The downside of Oculus Go is that it provides only 3 degrees of freedom (DOF) head tracking rather than the 6 DOF head tracking offered by the Rift and Vive. In other words, using a Go likely won't give quite the same experience as those high-end tethered headsets -- but it should be a better experience than Samsung Gear, Google Daydream, or Google Cardboard.

The challenge is that these mid-tier experiences lack the "wow" factor that will likely be needed to drive wider VR adoption, and to incentivize the creation of better content. That'll require a next-level device, like the Oculus Santa Cruz, a 6 DOF high-end standalone headset that's currently in the prototype stage, and on track to be in developers' hands next year.

Virtual reality could take a step toward the mainstream

Oculus Go doesn't have to be the best VR headset to be a success. It just has to bring a level of quality and content to the market that will impress consumers and intrigue them about the next generation of devices.

Given the relatively low number high-end headsets that have been sold so far, I would consider 30 million sales an impressive number for the Oculus Go to hit in its first year. That may sound like a lot, but remember: It's only a $200 device, and Facebook CEO Mark Zuckerberg has said he wants to get VR in the hands of 1 billion people around the world. If Oculus Go can get near that 30 million mark, it will prove the mainstream VR market, drive more interest from hardware and content companies, and build awareness among consumers. That's the real hope for Facebook's most important VR product yet.

Suzanne Frey, an executive at Alphabet, is a member of The Motley Fool's board of directors. Travis Hoium has no position in any of the stocks mentioned and owns a location-based virtual reality start-up. The Motley Fool owns shares of and recommends Alphabet (A shares), Alphabet (C shares), and Facebook. The Motley Fool has a disclosure policy.