Many tech stocks don't pay dividends. But that doesn't mean the sector is void of top-notch dividend stocks.

We asked three of our Foolish investors to pick a high-yield tech stock worthy of your investment dollars. Here's why they chose International Business Machines (NYSE:IBM), Cisco Systems (NASDAQ:CSCO), and Verizon Communications (NYSE:VZ). 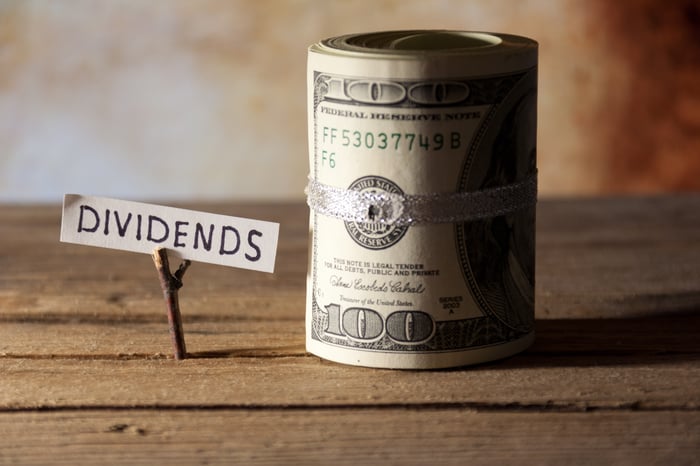 Leo Sun (IBM): IBM has posted annual revenue declines for 22 straight quarters, as its higher-growth "strategic imperatives" (cloud, mobile, social, security, and analytics) failed to offset the ongoing declines at its older business hardware, software, and IT segments. IBM's turnaround has been so sluggish that even Warren Buffett, renowned for his patience, sold off billions of dollars in shares over the past year.

However, IBM is also approaching an inflection point. Big Blue's 0.4% sales decline last quarter was much shallower than its dips in previous quarters, and there's hope that it can finally report positive growth in the near future.

Last quarter, IBM's strategic imperative revenue over the past 12 months rose 10% annually, accounting for 45% of its total revenue. That's up from 40% in the prior-year quarter. IBM is also investing in next-gen technologies -- like artificial intelligence, blockchain, and quantum computing -- which should keep its technology relevant for decades to come.

Analysts expect IBM's revenue to fall 2% this year, and for its earnings to rise about 2%. That stable earnings growth -- aided by cost-cutting measures and its ongoing shift toward higher-margin cloud services -- is good news for its forward dividend yield of 3.9%. That dividend, which has been raised annually for 22 straight years, is supported by a low payout ratio of 49%.

IBM's stock is also inexpensive at 11 times next year's earnings. IBM remains a cheap income play as the company approaches a potential turnaround.

Tim Green (Cisco Systems): After two years of slumping revenue, driven in part by the shift to subscriptions and recurring revenue, networking hardware giant Cisco expects to return to revenue growth next quarter. The stock currently sits right around its 10-year high thanks to this news, but dividend investors shouldn't be scared away.

Cisco stock currently yields about 3%. The company has only been paying a dividend since 2011, but it's quickly become one of the best tech dividend stocks. The latest dividend increase came in February, when Cisco boosted the quarterly payout by about 10%.

Only 45% of Cisco's free cash flow went toward the dividend in fiscal 2017, leaving some room for further dividend growth even if earnings growth is sluggish. Dividend growth could ramp up even faster if a tax reform bill is passed this year. Cisco has tens of billions of dollars in cash sitting overseas, and it plans to accelerate its share buyback program if it can tap that cash at a reduced rate. That will reduce the share count, allowing for a larger per-share dividend increase.

Cisco's revenue and earnings growth probably won't light the world on fire. But a 3% yield and room for dividend growth should have dividend investors interested in this stock.

A rebounding telecom leader with a juicy yield

Steve Symington (Verizon Communications): Verizon stock has returned a modest 4.6% so far in 2017, lagging the S&P 500's 21% gain. But that's largely because shares of the telecommunications giant are still recovering from its first-ever reported decline in postpaid wireless customers amid intensifying competition earlier this year.

Largely thanks to its popular new Verizon Unlimited plan, however, the wireless side of the business has been moving in the right direction since then, including the addition of 603,000 retail postpaid connections last quarter alone. And those customers are exceedingly loyal, with retail postpaid churn during the quarter of just 0.75%.

What's more, earlier this week Verizon announced a massively expanded deal with the NFL, giving it the rights to live-stream all in-market and national football games to any internet-connected device regardless of its network. This means a massive potential boost going forward for both the mobile streaming industry and Verizon's Oath media business, which it formed earlier this year following its acquisition of Yahoo. The NFL deal starts in January 2018, which means it will include this season's playoffs and the Super Bowl.

In the end, with shares only recently having broken into positive territory for the year, I think now is great time for opportunistic investors to buy Verizon stock and reinvest its healthy 4.4% dividend.