Please ensure Javascript is enabled for purposes of website accessibility
Log In Help Join The Motley Fool
Free Article Join Over 1 Million Premium Members And Get More In-Depth Stock Guidance and Research
By Tyler Crowe, Dan Caplinger, and Cory Renauer – Dec 16, 2017 at 10:32AM

Just about any investor can double their money if they pick well-run companies -- or even a basket of companies -- and wait. An investment strategy as simple as buying an S&P 500 index fund and reinvesting the dividends has been a money-doubling bet over the past five years. Or, had you purchased shares of Amazon.com 18 months ago, you would be sitting on a double as well. If you have patience, doubling your money can be relatively easy.

Doubling your money in a relatively short time is much tougher. It typically involves investing in younger, less established companies that have lots of growth potential but could give a lot of ground if a few things don't swing their way. There are, though, some stocks that look like they have a double in them over a relatively short time frame, and three of our investing contributors think Spark Therapeutics (ONCE), Tractor Supply (TSCO -0.86%), and American Tower (AMT 0.46%) fit the bill. 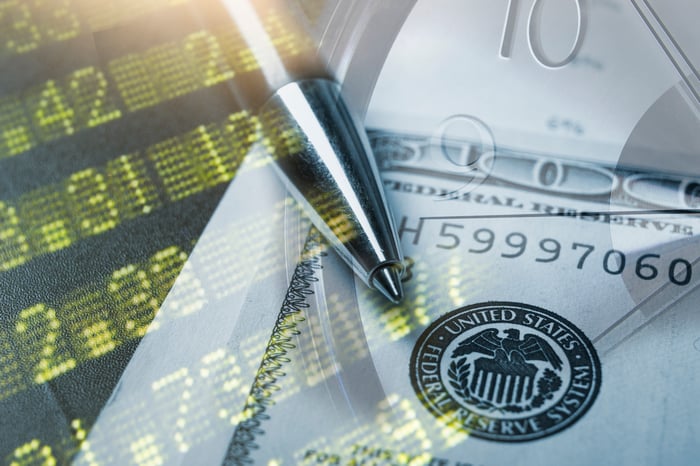 Cory Renauer (Spark Therapeutics Inc.): This company is advancing a portfolio of gene-therapy candidates that aim to cure devastating diseases with a single treatment. Investors have been buzzing in anticipation of a widely expected positive approval decision regarding the company's most advanced candidate.

Although success for Spark's sight-restoring candidate might not be enough to justify on its own the company's recent $2.6 billion market cap, this stock could double your money over the long run. With just a few thousand potential patients in the U.S., vision loss due to confirmed biallelic RPE65-mediated inherited retinal disease is as rare as it sounds.

Although there's little doubt that Luxturna effectively restores these patients' vision, analysts expect sales to top out at around $400 million per year. While that's not enough to double your money, it looks like the proprietary technology that underpins Luxturna can be directed against a slew of targets, including rare bleeding disorders.

Investigators followed 10 patients for a combined 492 weeks after they were given a single dose of SPK-9001 for hemophilia B. The group's annualized bleeding rate dropped from 11.1 events per year to just 0.4, plus these patients were able to reduce their use of factor replacement therapies by 99%. A clear value proposition and a larger potential patient population than Luxturna should ultimately spell success for this program, which in turn could go a long way toward convincing the market this stock is worth more than twice its recent price.

This retailer is planting the seeds of growth

Dan Caplinger (Tractor Supply): Retail has been a dangerous place for investors lately, and Tractor Supply has been vulnerable to the same worries that have sent shares of many other brick-and-mortar retailers downward. Early in 2017, the retailer of farm equipment, lawn and garden supplies, and pet and livestock products saw its first drop in customer traffic in nine years, sending comparable-store sales down 2.2% compared to the previous year's period. Yet some of those declines were due to temporary weather issues, and more recently, Tractor Supply has managed to rebound.

One reason to be confident in Tractor Supply's future is that the most common argument against traditional retailers doesn't necessarily apply as strongly to the company, because the bulky goods that it specializes in often aren't well-suited to e-commerce delivery-based options. Tractor Supply has also worked to optimize its in-store pickup online-ordering system, and more than half of customers' online orders are now getting delivered using the pickup option.

Despite the rebound in financial performance, Tractor Supply stock is still below where it traded at the beginning of 2017, let alone its peak in mid-2016. If the agricultural community keeps seeing signs of recovery, then shareholders could see a double in a relatively short period of time. 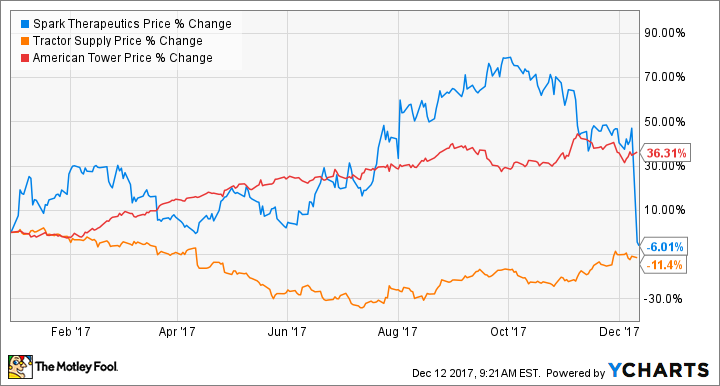 ONCE data by YCharts.

Tyler Crowe (American Tower): The name American Tower seems to suggest that this real estate investment trust that specializes in cellular towers would be an American-centric company, but that couldn't be further from the truth. Of the company's 150,000 cellular structures, about 110,000 are outside the U.S., and that doesn't include the company's recent purchase of 20,000 towers in India, which is expected to close in the first half of 2018.

There are two big levers that are going to drive American Tower's growth over the next several years: adding towers to its portfolio in international markets and the conversion to faster internet speeds in all markets. Usually, a telecommunications company's move to a faster network speed (for example, 3G to 4G) coincides with greater internet use from customers, which in turn means the company needs to install more equipment on towers to handle the traffic. In the U.S., the move to 5G is likely going to mean more tenants per tower, which boosts the rate of return for each tower.

Internationally, many companies are upgrading to 4G, and are selling their own towers to raise cash for the billions in investment the network overhaul will take. American Tower's recent acquisition in India was the result of two merging telecom companies that are raising cash for the push into 4G. Because these companies are strapped for cash, American Tower was able to buy these multi-tenant towers at a price that makes them immediately accretive to earnings and cash flow. Across many emerging markets, mobile data use is expected to grow 50% or more annually over the next five years, which will likely lead to more tenants wanting to rent space on these prime locations.

American Tower has been able to grow earnings per share by 16% annually over the past 15 years, and that could very well accelerate as more lucrative international towers become available. It may take longer than a year for this stock to double, but it's looking like it will happen sooner than later.

Why American Tower Is a Dividend Investor's Dream