Please ensure Javascript is enabled for purposes of website accessibility
Log In Help Join The Motley Fool
Free Article Join Over 1 Million Premium Members And Get More In-Depth Stock Guidance and Research
By Natalie Walters - Dec 16, 2017 at 11:53AM

Is it an Apple or a Garmin?

This year, fitness wearables once again proved that they are not just a passing fad, soon to be gathering dust in the backs of our dresser drawers. In the third quarter, total global wearable device shipments climbed 7.3% year over year to 26.3 million units, according to global marketing intelligence firm IDC.

However, there has been an important shift in the market, according to IDC. Consumers want more than just a fitness tracker on their wearables: They need them to have a GPS, cellular capabilities, and other features, too. 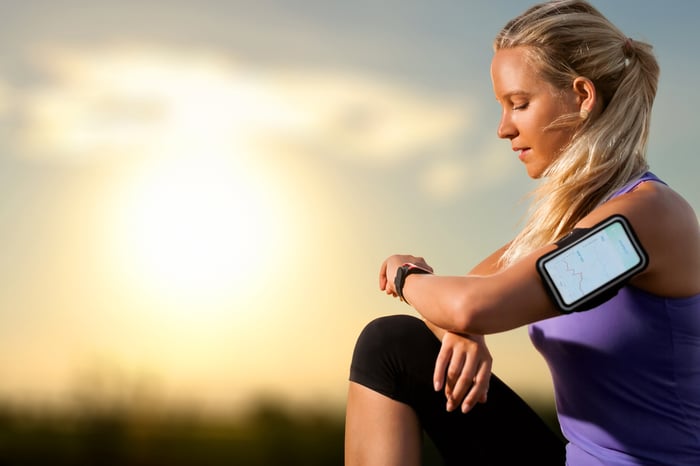 So just how high end do these wearables go?

The most high-end wearable fitness device of 2017

In possibly the least surprising wearables news of 2017, Apple (AAPL 1.62%) made this year's most expensive wearable fitness device.

The original Apple Watch debuted in April 2015, and outsold the iPhone and the iPad when comparing the first nine weeks of sales for the three devices. That's in part because dedicated iPhone users have become an eager fan base ready to adopt other products that work seamlessly within Apple's ecosystem.

This year brought the Apple Watch Series 3, which was unveiled alongside the new iPhones at the company's annual big launch event in September. Its biggest upgrade was a cellular feature that allows wearers to make calls and receive texts even without Wi-Fi or a paired iPhone nearby. 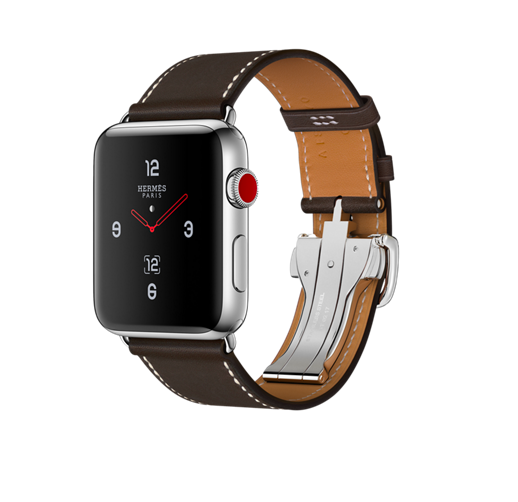 The Apple Watch Hermès was the most expensive wearable fitness device of 2017.

The most expensive Apple Watch Series 3 is the fashionable Hermes model, which retails for $1,399. It's made with stainless steel, a leather strap, and the Hermes logo on the back.

However, if you aren't looking to break the bank on a wearable, you can pick up a more affordable Apple Watch Series 3 model that includes GPS and cellular capabilities for $399. If you're fine without the cellular feature, you can tick the option for "just GPS" and scoop up a new Watch for $329.

For comparison's sake, FitBit's (FIT) newest watch -- the Ionic -- is on sale for $269.95. While it lacks cellular connectivity, its features do include GPS tracking, a heart-rate monitor, and Fitbit Pay. Meanwhile, Garmin's (GRMN 0.24%)  most expensive wearable is its new Descent Mk1, which retails for $999.99. The Descent works as an everyday wearable device with GPS functioning, as well as a scuba dive computer that lets you mark dive entry and exit points in fresh or salt water.

Despite negative commentary surrounding the wearables market, it's growing at a steady pace.

The top five wearable companies remain the same: Xiaomi, FitBit, Apple, Huawei, and Garmin. Here's how the wearables market share pie looks after the third quarter of 2017, according to IDC.

As you can see, Apple is showing tremendous growth, while Fitbit is quickly losing ground to its competitors.

Apple's new cellular-capable smartwatches should help maintain that momentum into the new year. If Fitbit doesn't want to drop out of the top five wearable names, it will need innovative products, as well as competitive pricing.

The state of the wearables market

While wearables started off as simple devices that did little more than count steps, consumers today demand more. And now that Apple has added cellular capabilities to its Series 3 Watches, users have more options than ever to equip it with apps, and to use it for cellular notifications, calling and texting.

"Basic wearables -- with devices coming from Fitbit, Xiaomi, and Huawei -- helped establish the wearables market," Ramon Llamas, research manager for IDC's Wearables team, said in a statement. "But as tastes and demands have changed toward multi-purpose devices -- like smartwatches from Apple, Fossil, and Samsung – vendors find themselves at a crossroads to adjust accordingly to capture growth opportunity and mindshare."

As wearables evolve, shipments should continue to grow, with forecasting that 240.1 million units will be shipped in 2021, up from 104.3 million in 2016, according to the IDC report.

The growth chart doesn't lie. Whether you're looking for a last-minute gift for a tech lover or an expanding sector to invest in, the wearables market is worth looking into.