At the company's peak in 2013, shares of offshore drilling giant Seadrill Ltd (NYSE:SDRL) traded for more than $45 each, and the company paid investors $3.93 in dividends the last four quarters it made a payout. Fast-forward a scant four years later, and the company is in bankruptcy proceedings... and you can buy (though I wouldn't suggest you do) shares for around $0.27 each.

And while there's very little hope for current shareholders to come out ahead when Seadrill does emerge from bankruptcy, the company will almost certainly be much stronger and potentially one of the biggest and best offshore drillers on the water. And that could make it a compelling future investment that at least makes it worth watching. 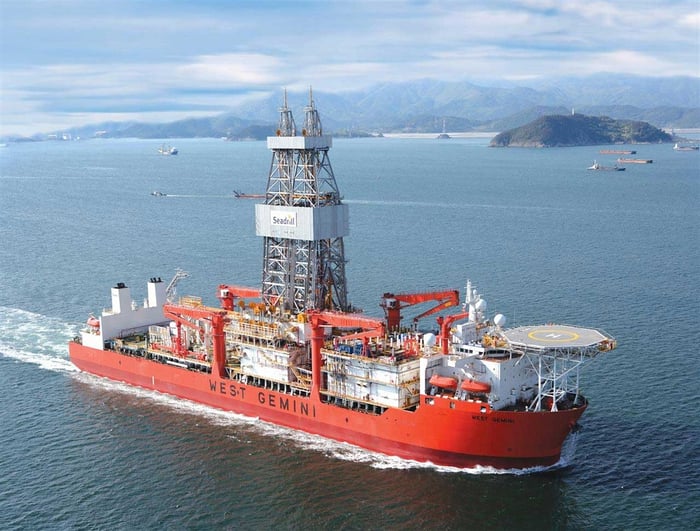 The short version of Seadrill's problems can be summed up thusly: Too much debt tied to a too-aggressive growth initiative -- compounded by a too-generous dividend -- led to a perfect storm when oil prices collapsed in 2014. Producers slashing spending -- offshore drilling investments have fallen four straight years -- and years of newbuilding by the industry combined to drive day rates for drilling work down by as much as half. Simply put, competition for just about every drilling contract has been fierce, and only in the past couple of quarters has it started to abate.

Seadrill took steps to cut its costs, including idling vessels and negotiating with shipbuilders to delay newbuild deliveries and lenders to push off debt maturities. And this strategy generally worked -- right up until it didn't. With several billions of dollars in debt set to mature and no way to satisfy those maturities, Seadrill entered into a prenegotiated bankruptcy agreement with its lenders and bondholders.

Here are the main terms of Seadrill's prenegotiated bankruptcy agreement, from the Q&A the company released when it announced the filing in September 2017:

Under the agreement, $1.06 billion dollars of new money will be invested into the company, bank loan amortization payments will be deferred for two years and bank loan maturities will be deferred for approximately five years. In addition, debt will be reduced through converting our bonds ($2.2 billion) into shares in the company. The chapter 11 proceedings are being used to implement the deal and finalize the agreement with the remaining stakeholders.

In short, Seadrill is using a Chapter 11 bankruptcy filing to get its balance sheet in order. This should allow the company to emerge from bankruptcy with lower expenses, have more flexibility in its operations while the offshore cycle continues to play out, and continue operations while this happens. Seadrill will most likely come out the other side stronger and more competitive. 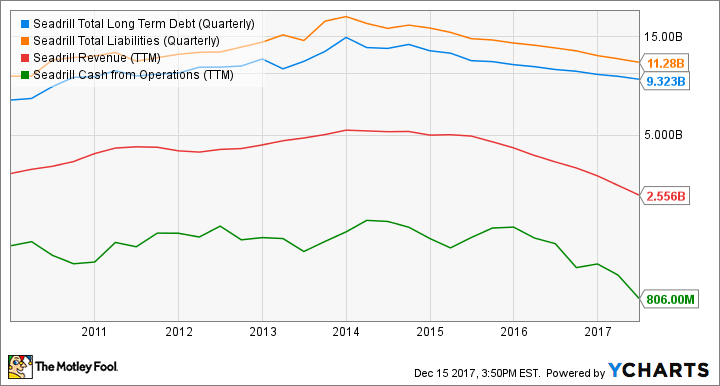 Unfortunately, existing shareholders won't get much out of the deal. The negotiated pact allowed for current investors to hold a 2% stake in the "new" Seadrill, but even that isn't guaranteed. Not every debtholder was on board with the plan the company announced, and negotiations will continue for some time. The final amount of common equity existing shareholders receive could end up being zero.

Furthermore, even if the existing equity stake gets converted into 2% of the new company, the current stock price isn't exactly cheap. The new Seadrill would have to have a market cap value of more than $6.8 billion for the current share price to be breakeven. That's worth more than Transocean and Diamond Offshore combined today.

While Seadrill is not a stock investors should consider buying while its bankruptcy proceedings play out, it is on track to be an intriguing company when it does emerge. Offshore investment is expected to increase in 2018 after multiple years of falling spending, and that spending very well could continue to increase for several years after that. The reality many offshore oil producers are starting to face is that underinvestment has led to a drop in oil output, and it will take increased spending simply to maintain current production levels from offshore oil assets.

And despite its financial problems, Seadrill has one of the most capable, newest fleets of drilling vessels operating and a strong track record of safe and efficient operations that make it a preferred partner for many oil producers. Combine that with what should be a strong balance sheet post-bankruptcy, and investors would be smart to keep Seadrill on their radar once it emerges from bankruptcy sometime in 2018.