Dividends are good. Growing dividends are even better. But dividends that double in only a few years? They're great. Or at least some of them are.

There are some stocks with fast-growing dividends that still have puny yields. Others have enjoyed strong dividend growth in the past, but the future appears to be murkier. However, there are a few attractive income stocks whose dividends have doubled in recent years and have the potential to double yet again. Amgen (NASDAQ:AMGN), Lowe's Companies (NYSE:LOW), and Texas Instruments (NASDAQ:TXN) rank high on this list. 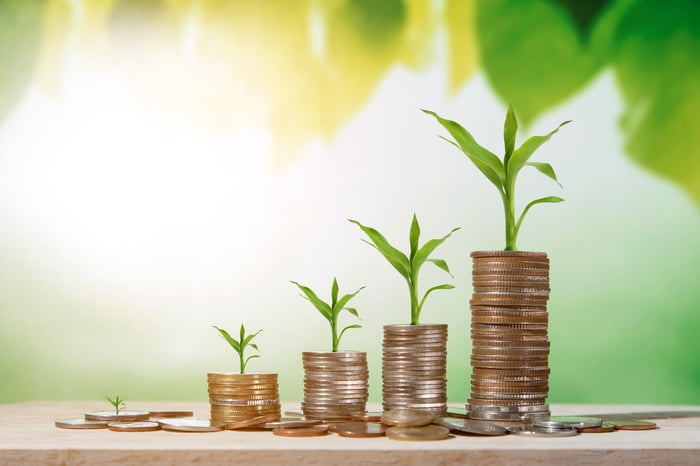 Amgen has increased its dividend by nearly 145% over the last five years. Just a few days ago, the big biotech hiked its dividend again, this time boosting its payout by 15%. If Amgen keeps it up at that rate, its dividend will double yet again within the next five years. With a current yield of 2.62%, that kind of growth would have income-seeking investors sitting pretty in the next decade.

But can Amgen keep growing its dividend as it has in the past? I think so. The biotech uses only 40% of earnings and less than a third of its free cash flow to fund the dividend program. That gives Amgen plenty of flexibility for future dividend increases.

There is a problem, however. Amgen's earnings growth is likely to drop considerably from levels in previous years. Sales are slipping for the company's two top-selling drugs, Enbrel and Neulasta, as competitors take away market share. Amgen claims several drugs that are enjoying sales growth, but it's not enough to compensate for the other declines.

Better days could be ahead for Amgen, though. Cholesterol drug Repatha could take off following the recent FDA approval for the drug in preventing heart attacks, strokes, and coronary revascularizations. Migraine drug erenumab, for which Amgen awaits potential regulatory approval in May 2018, should be another winner. Robert Bradway, Amgen's CEO, stated in September that the biotech "is trying to find acquisitions that add value for our shareholders." With a huge cash stockpile of more than $41 billion, funding those acquisitions shouldn't be a problem.

Lowe's dividend has soared by 156% over the last five years. In June, the home improvement retailer increased its dividend by 17%. With the power of compounding, Lowe's dividend will double in less than five years at that growth rate.

Another doubling seems quite possible. The company's payout ratio is a low 36.5%. Lowe's uses only 27% of its free cash flow to pay dividends. It technically could afford to double the dividend now if it wanted to.

While Wall Street expects earnings growth for Lowe's to slow down in the next few years, there's no cause for alarm. Lowe's should still be able to increase earnings by close to 14% annually. That should make future dividend hikes a no-brainer for the company, which has increased its dividend for the last 54 years.

Some naysayers compare Lowe's to its larger rival Home Depot, which has generated much more impressive total returns in the past. There are plenty of reasons to expect that Lowe's could beat its nemesis in stock gains over the next few years, though.

Texas Instruments leads the pack in dividend growth. Over the last five years, the big chipmaker's dividend hasn't just doubled, it's nearly tripled. In September, TI boosted its dividend by 24%. If it keeps that kind of increase going, Texas Instruments' dividend would be twice its current level by the end of 2020. That sounds great, considering that TI's yield already stands north of 2.5%.

Even with its huge dividend hikes, Texas Instruments uses less than 47% of its earnings to pay dividends. The company uses close to the same percentage of its free cash flow to fund the dividend program. Like Amgen and Lowe's, TI has a lot of flexibility for more dividend increases.

What does the company itself say about future dividend hikes? According to TI's website, "We've committed to return all of our free cash flow to shareholders through dividends and stock repurchases." TI stock currently trades at nearly 22 times expected earnings, so it's not exactly cheap. I wouldn't be surprised if the company chooses to pour more of its cash flow into paying dividends than it does in buying back shares.