Please ensure Javascript is enabled for purposes of website accessibility
Log In Help Join The Motley Fool
Free Article Join Over 1 Million Premium Members And Get More In-Depth Stock Guidance and Research
By Taylor Muckerman - Dec 17, 2017 at 8:33AM

Electric vehicles are gaining greater traction every day, and investors in the oil industry need to take notice.

As you may have heard, electric vehicles are catching on. It's to the point where several of the world's largest countries have announced tentative dates for when the last gas-powered vehicles will be sold on their respective turfs.

If you ask me, the writing is already on the wall for oil producers. It may just take another five to 10 years to dry.

Among others, Britain and France have drawn a line in the sand for 2040, while India has bested them by a decade, setting 2030 as its own deadline. Several other nations have targets set for how many EVs must be sold each year without announcing an outright ban on petroleum-fueled autos -- yet.

In an alternate universe, this might not matter all that much to oil producers. Unfortunately, the reality is that road transportation accounted for 45% of global oil demand in 2016. 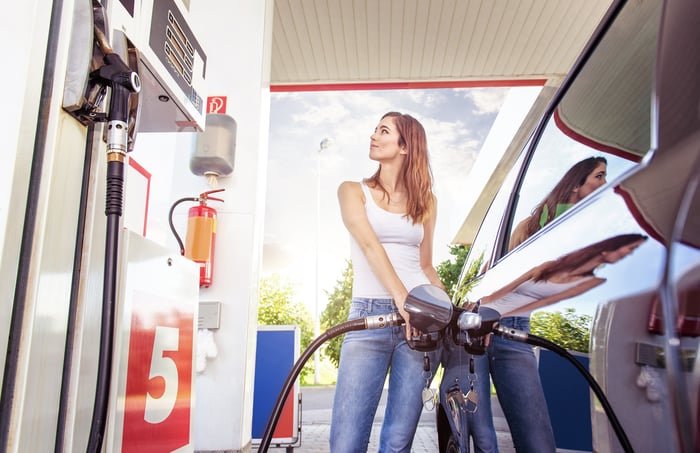 Just the other day, Chevron's senior economist, Adam Karson, emphasized the fact that only around 1% of global vehicle sales are currently of the electric variety. Of course, that'd be all well and good if EV sales weren't growing as quickly as they are today -- nearly 40% year over year in the U.S.

By 2040, suggests a forecast from Bloomberg New Energy Finance, around one-third of all cars on the road could be electric, while Exxon only believes around 6% will be. By BNEF's math, that proportion would eliminate the need to produce 8 million barrels of oil per day; in September 2017, that was 84% of U.S. oil production.

But this doesn't mean that oil companies have until 2040 to figure it out.

Gasoline consumption will begin to shrink on a year-over-year basis in 2026, says energy consultancy Woods Mackenzie (a subsidiary of Verisk Analytics). That gives the oil industry nine years to find an alternative to fill the looming void.

Picking up the slack

So where are oil producers to turn?

One area of focus for companies like Chevron and ExxonMobil has been petrochemical production, due to growing global demand for high-quality plastics.

A key ingredient in these plastics -- used by industries such as automotive, packaging, and various consumer goods -- is polyethylene. And a critical feedstock for polyethylene is (you may have guessed it) ethylene. Thankfully for U.S. energy producers, ethane cracked from natural gas is a primary source of ethylene.

Total global polyethylene production for 2018 is expected to fall just shy of 100 million tons. However, some believe demand could eclipse 120 million tons per year by 2026.

To help bridge that gap, big oil and gas companies will need to spend heavily now.

Chevron has partnered with Phillips 66 (PSX -1.07%) on a $6 billion expansion project in the Houston area. The project includes two polyethylene plants and one ethane cracker that's been delayed by a few months due to Hurricane Harvey. Together, the plants will be capable of producing 1 million tons per year of polyethylene.

Not to be outdone by its smaller peer, Exxon has expanded its polyethylene production capacity down the road in Mont Belvieu, part of its $20 billion in regional expansion plans. With one line already running as of Oct. 17, the two new lines will expand existing plant capacity from 1.2 million to 2.5 million tons per year.

As much as big oil wants to remain big oil, times are changing. It'll be a fine example of how, at first, things change slowly before they change dramatically in the blink of an eye.

For Fools who are already investing in oil producers, or are considering it, it's critical to consider how their management teams are addressing this very real threat. At the moment, these integrated behemoths have the advantage of producing both oil and gas, along with their downstream byproducts. In a decade or two, however, I'm willing to bet we'll be looking at dramatically different businesses. Don't get caught off guard.