These companies have already announced big dividend increases for 2018, and they expect that trend to continue in the years that follow.

This past year has been a good one for income investors. Overall, 310 companies in the S&5 500 have increased their dividends while only 10 have cut them. However, that does leave nearly 200 companies in that index alone that either don't pay investors anything or didn't give them an income boost this year. This distinction is worth noting, since companies that increased their dividends have delivered a 10.1% average annual return since 1972 compared to just a 7.6% average annual return for those they kept things status quo, according to a study by Ned Davis Research. Meanwhile, those that don't pay their investors anything only averaged a 2.6% average annual return.

For those investors who owned stingy stocks this year, it might be time to consider an upgrade. Three that should be high on that list are pipeline giants Enbridge (ENB 0.95%), TransCanada (TRP 1.54%) and Enterprise Products Partners (EPD 1.07%) since each has already promised to increase their dividends again in 2018. 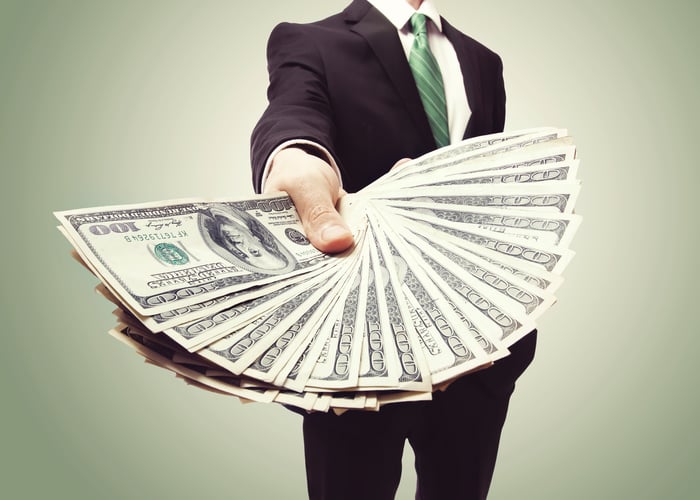 These pipeline stocks have a history of handing cash to their investors. Image source: Getty Images.

Enbridge recently announced plans to increase its dividend 10% next year and said it would give similar increases in 2019 and 2020. That continues the Canadian oil pipeline giant's generosity to investors over the years. With 2018's raise, it has now grown its dividend 23 straight years, which puts it just two years shy of becoming a dividend aristocrat. What's even more impressive is that Enbridge hasn't just been giving investors token raises to keep that streak alive but has increased its payout by an impressive 11.2% compound annual rate over the past two decades. That dividend growth has helped fuel a total return of more than 1,230% over the past 20 years, which has annihilated the S&P 500's 307% total return over that same period.

Driving Enbridge's ability to grow its dividend is the 31 billion Canadian dollars ($24.2 billion) of growth projects it currently has under development, which should drive 10% annual cash flow growth through 2020. The company has secured long-term, fee-based contracts backing these projects, which will lock-in cash flow. That will further support the company's low-risk business model where roughly 96% of its cash flow comes from predictable sources. That stable cash flow, when combined with the company's strengthening balance sheet and low payout ratio, makes Enbridge a great income stock to hold for the long term, especially considering that it yields a compelling 4.8% at the moment.

Fellow Canadian pipeline giant TransCanada also recently announced plans to boost its payout 10% next year. That marks the 18th straight year the company has increased its payout, which has helped fuel a more than 970% total return for investors since 2000, easily beating the 157% total return of the S&P 500 since that time. Furthermore, the company reaffirmed that dividend growth through 2020 would be at the upper end of its 8% to 10% annual range and that it anticipates rising it another 8% to 10% in 2021.

Like Enbridge, the primary fuel driving TransCanada's dividend higher is the fee-based growth projects it currently has in development. Overall, the company has CA$24 billion ($18.7 billion) of near-term expansions under way, which should fuel 10% compound annual earnings growth through 2020. Add the stable cash flow from those projects, along with the fact that TransCanada gets more than 95% of its earnings from predictable sources, and it gives the company clear visibility on future growth. Meanwhile, those factors, along with a strong balance sheet and conservative dividend payout ratio suggests that TransCanada's 3.8%-yielding payout is on rock-solid ground. 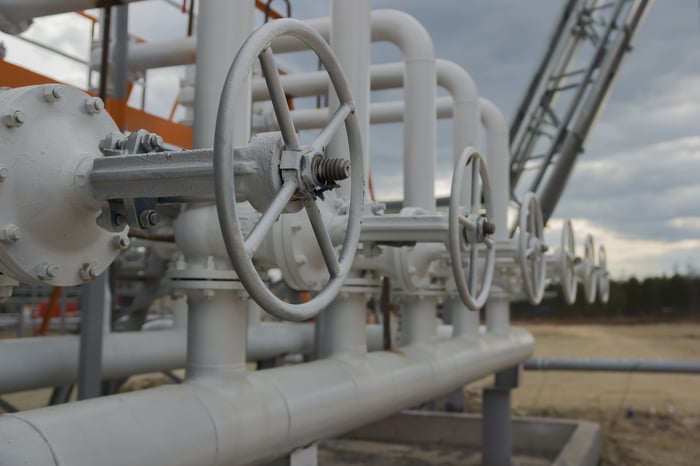 These pipeline stocks expect to continue increasing the flow of dividends heading back to investors. Image source: Getty Images.

Enterprise Products Partners also has a long history of increasing the cash distributions it sends to investors each year. In fact, earlier this year the pipeline company announced its 53rd consecutive quarterly distribution increase, which pushed the total since going public in 1998 to 63. That growing payout has enabled Enterprise to rack up a more than 1,500% total return since its debut, obliterating the S&P 500's slightly more than 250% total return over that timeframe.

Enterprise already said that it would increase its payout in each quarter of 2018. However, the company did note that it would reduce the size of its quarterly increases next year -- though it's not for lack of growth, since the pipeline giant has more than $9 billion of projects under construction. Instead, it wants to retain more cash to finance those expansions, which should make its payout even safer going forward. Meanwhile, the company stated that it could choose to reaccelerate distribution growth in 2019 or return that cash to investors through a repurchase program. Either way, Enterprise remains an excellent option for income-seekers, especially considering that the MLP yields an impressive 6.5%.

These pipeline companies all generate predictable cash flow, which gives them money to build more pipelines while still returning a big slice of their cash to investors. Meanwhile, with a large backlog of expansion projects under construction, each company has visible growth prospects, which gives them the confidence to announce dividend increases for 2018 while forecasting additional raises for the next few years. That growing income stream should enable these pipeline stocks to outperform over the long-term, which is why income investors should seriously consider adding one of them to their portfolio.